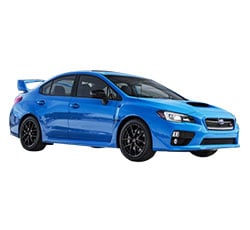 Should You Buy a 2016 Subaru WRX? Here Are Some Reasons For and Against

Equipped with Subaru’s Symmetrical AWD system, the new 2016 WRX offers all-weather excitement. While the standard 2016 Subaru WRX is engaging to drive, the high-powered STI model comes standard with several track-ready goodies. The sports sedan’s excellent handling makes it a thrilling performer. Due to its roomy design, the 2016 WRX is an excellent alternative to a traditional family hauler. A rear-view camera comes standard on all trims.

The 2016 Subaru WRX’s styling remains the same this year. However, prospective buyers will benefit from an improved touch-screen display. More advanced safety features are available as well.

The 2016 Subaru WRX is powered by a turbocharged 2.0-liter, four-cylinder engine. When called upon, the boosted engine can churn out a thrilling 268 horsepower and 258 pound-feet of torque. As always, the “boxer” engine produces one of the most addictive sounds in the business. When launched from a stop, expect to hit 60 mph in around 5.5 seconds.

Under the hood of the STI model sits a larger 2.5-liter engine. The 2.5-liter engine is able to produce an impressive 305 horsepower and 290 pound-feet of torque. When tested at the track, the speedy sedan jetted to 60 mph in only five seconds. A six-speed manual gearbox comes standard with this engine.

A CVT is available on the standard 2016 Subaru WRX model. However, it has been tweaked to deliver a more responsive performance than the average CVT system. The Sport Lineatronic transmission can actually mimic the shifting dynamics of a traditional automatic transmission. Although the manual-equipped WRX is a tad bit quicker, the CVT does an effective job of keeping the driver entertained.

All versions of the 2016 Subaru WRX come standard with a Symmetrical AWD system. Drivers can expect superb traction at all times. Unlike most of the RWD sports sedans on the market, the new WRX performs exceptionally well in the snow. The AWD system also helps the sedan to accelerate aggressively without causing the tires to spin.

6) Exceptional Handling
Fitted with a sports-tuned suspension, the 2016 Subaru WRX delivers exceptional handling. The engine sits lower than normal, which helps the sedan to remain well-balanced. When traveling on a curvy road, the WRX hugs the pavement like a legitimate race car. Drivers will also love the responsiveness of the steering system.

Although the 2016 Subaru WRX is built for performance, it still provides the passengers with a great deal of comfort. Families will certainly appreciate the extra legroom in the back. For the drivers who find an average family sedan to be on the boring side, the 2016 Subaru WRX may be the perfect match. The available cargo space is also very accommodating.

Even the base 2016 Subaru WRX come standard with a Starlink infotainment system. Some of the other high-tech standard goodies include a rear-view camera, Bluetooth connectivity, HD radio, and cruise control. Keep in mind that the new WRX has a starting price of less than $27,000. Meanwhile, high-end upgrades such as the GPS navigation system will come in handy on road trips.

1) Some Models Deliver Sub-par Fuel Economy
Except for the manual-equipped base model, all of the other versions deliver below average gas mileage. The racy 2016 Subaru WRX only gets 23 mpg on the highway.

2) STI Delivers a Rougher Ride
Due to its stiffer suspension, the STI rides noticeably harder than the base model. While the overall ride is not extremely harsh, it can be a bit jarring on some road surfaces.

3) Fair Amount of Road Noise
Owners of a new 2016 Subaru WRX can expect more road noise than normal. Although this may not be a big issue, it is something to keep in mind.

Some of the 2016 Subaru WRX’s primary rivals include the VW GTI and the Mitsubishi Lancer. Although the Lancer is a solid driving machine, it suffers from an outdated design. Meanwhile, the high-performance VW Golf R is a tad bit too expensive for some car enthusiasts. In fact, the Subaru WRX STI costs about $4,000 less than the Golf R.

The 2016 WRX is one of the most fun-to-drive sedans on the market. Both the base model and the high-performance STI model will offer a limitless amount of excitement. Although the WRX is a quick car, its truly captivates the driver with its razor-sharp handling. The arrival of new safety technologies also makes it a great family vehicle.