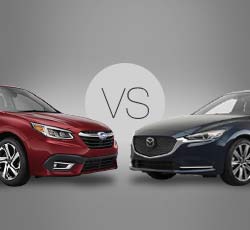 For the 2020 model year, Subaru and Mazda have given customers a lot to think about. Anyone who has been searching for a modestly priced sedan that feels sporty and youthful will want to take a good look at the Subaru Legacy and Mazda6. These are both quality vehicles that have many attractive features. This overview will give prospective customers detailed information about how the 2020 Subaru Legacy and 2020 Mazda6 stack up against each other.

Before jumping in, it should be mentioned that there are six trims of the Legacy and five trims of the Mazda6. The Subaru starts out with a base model and moves up to the Premium, Sport, and Limited. At the top of the line-up are the Limited XT and Touring XT. The Mazda6's entry-level trim is called the Sport. It's followed by the Touring, Grand Touring, Grand Touring Reserve, and finally, the Signature trim.

Both the Subaru Legacy and Mazda6 offer two different engines. This gives people some flexibility when it comes to purchasing vehicles, as there are more affordable engines available on the lower trims and enhanced components exclusively found on the higher trims.

The first four trims of the Subaru Legacy run on a 2.5-liter BOXER engine with four cylinders. This type of engine will give you some excitement behind the wheel, as it comes with 182 horsepower. It also has a decent amount of torque (176 pound-feet). This engine gets an estimated 27/35 (city/highway) miles per gallon, so it would generally considered to be an efficient model.

With the Mazda6, the Sport and Touring trims are powered by a 2.5-liter, SKYACTIV-G four-cylinder engine. Being the same size as the Legacy's standard engine, it has almost the same specifications, with 187 horsepower and 187 pound-feet of torque. It comes with an estimated mileage of 26/35 miles per gallon, which many people would be pleased with.

The higher trims of these cars get significant upgrades. The Limited XT and Touring XT trims of the Legacy have a turbocharged four-cylinder engine with a displacement of 2.4 liters. It provides much more kick, with 260 horsepower and 277 pound-feet of torque. Like the lower Legacy trims, these models use a Lineartronic continuously variable transmission. This engine isn't quite as efficient as the others in this comparison so far, earning up to 27/35 miles per gallon.

At the Grand Touring level of the Mazda6, the car is enhanced with a 250-horsepower, 2.5-liter turbocharged engine. It has an impressive 310 pound-feet of torque, and it can achieve 23/31 miles per gallon. In the Mazdas, engines are paired with six-speed automatic transmissions. They have manual shift and sport modes, making them a little more attractive to drivers who like being in control over shifting. This is one way in which the Mazda6 sets itself apart from the Legacy.

Further boosting handling in the Subaru are three key features: Vehicle Dynamics Control, Traction Control System, and Active Torque Vectoring. They work together to optimize braking and engine torque so that the car can better stay in control, even when taking tight turns or going over rough terrain. In the Mazda6, a similar mechanism is called SKYACTIV-Vehicle Dynamics with G-Vectoring Control Plus. It also makes minor adjustments to power delivery and the way the car is balanced, with the goal of optimizing steering and stability.

For many years, customers have been more than satisfied with their Subarus and Mazdas. The 2020 Legacy and Mazda6 should be expected to be dependable and easy to maintain. They come with limited powertrain warranties that are good for five years or 60,000 miles, whichever point comes first.

These two cars are known to be driver-friendly. In other words, most people would be comfortable and confident getting behind the wheel of either a Subaru Legacy or a Mazda6. They sit relatively low to the ground, a stance that some people prefer, and they are easy to maneuver. Electric power assisted steering and front MacPherson struts in both vehicles help smooth out the ride. The Mazda6 has a rear multilink suspension with a stabilizer bar, and the Legacy has a double-wishbone system with stabilizer bar.

The Legacy and Mazda6 have frames that are almost the same size. With respective lengths of 190.6 and 192.7 inches, they can be slid easily into tight parking spots. They have exactly the same widths, and the Legacy is about two inches taller than the Mazda6. As a result, there's about two more inches of front head room in the Legacy than in the Mazda6, but only the tallest of passengers would likely have a problem with the head room in the Mazda6.

The Subaru has 42.8 inches of front leg room and 39.5 inches of rear leg room. In comparison, the Mazda6 has 42.2/38.7 (front/rear) inches of leg room. The similarities extend to the trunks, with the Subaru having a cargo volume of 15.1 cubic feet and the Mazda having a trunk that can hold 14.7 cubic feet of material. This is a good amount of space, practical for everyday errands as well as longer road trips.

Giving drivers plenty of conveniences are a number of available amenities. They include keyless access, push-button start, interior storage compartments, heated and ventilated front seats, heated rear seats, and power-adjustable front seats. The Mazda6 can come with driver's seat memory, and the seating material in both vehicles starts as cloth and goes all the way up to Nappa leather.

On the Mazda6, the infotainment system includes an eight-inch touchscreen. The entertainment package in the base model comes with six speakers, Bluetooth, Pandora integration, and HD radio. Apple CarPlay and Android Auto are integrated into the Mazda6's infotainment system at the Touring level and above. Higher trims have a Bose audio system with 11 speakers, navigation, SiriusXM Satellite Radio, and SiriusXM Traffic and Travel Link.

The Subaru Legacy's base model has a dual seven-inch touchscreen with Apple CarPlay, Android Auto, Bluetooth, and SiriusXM Radio, so it's more attractive than the package seen in the entry-level Mazda6. Moving up just one trim comes along with an upgrade to an 11.6-inch touchscreen. Navigation is available on mid-level models and standard on the higher trims. The highest available sound system has 12 speakers, and all Legacy trims except the base model have 4G LTE Wi-Fi capability.

In addition to the air bags, sturdy frames, tire pressure monitoring systems, and other standard features that are commonly seen in modern vehicles, the 2020 Subaru Legacy and Mazda6 have many advanced mechanisms in place. The Legacy benefits from having EyeSight Driver Assist Technology package, which includes adaptive cruise control, lane keep assist, lane departure/sway warning, and a pre-collision braking system that can reduce the chances of frontal collisions. The Legacy also has a rear view camera and automatic high beams as standard safety elements.

Many of the same systems are found in the Mazda6. The Sport trim of the Mazda6 has a rear camera to give people a clear view of what's behind them when they're backing up. Smart brake support comes with collision warning so that people will be less likely to hit those in front of them. Mazda radar cruise control includes stop-and-go functionality, which is useful in busy traffic.

There's also lane keep assist, lane departure warning, and high beam control. The Mazda6 has blind spot monitoring with rear cross traffic alert as a standard component; this is available on some mid-level Legacy trims and only standard on the Limited, Limited XT, and Touring XT trims.

At the higher end of the Legacy's and Mazda6's line-ups, several more technologies are included with the safety packages. The Legacy has reverse automatic braking to prevent drivers from backing into objects, and it also has a DriverFocus Distraction Mitigation System that can alert drivers when their eyes aren't focused on the roads. The Mazda6 Signature has a 360-degree monitor, front and rear parking sensors, a pedestrian detection component on the smart city brake support system, and adaptive front lighting. This last technology allows the headlights to optimize their angles, depending on whether someone is taking a turn or if the road is uneven.

Both of these cars have lower trims that are affordably priced. The base model of the Legacy is $22,745, the Premium is $24,995, and the Sport is $26,945. With Mazda's sedan, the Sport is offered for $24,100, and the Touring has a cost of $26,700. A difference between the two base models is that the Mazda6 doesn't come with Apple CarPlay or Android Auto, though it does have a number of other nice details.

If customers are willing to spend about $35,000, they can get cars equipped with luxurious Nappa leather seats, advanced technology packages with navigation and premium sound systems, and comprehensive safety systems. In addition, they have turbocharged engines that can make regular drives around town much more thrilling. The models priced around this amount are the Mazda6 Grand Touring Reserve, Mazda6 Signature, Legacy Limited XT, and Legacy Touring XT.

The 2020 Subaru Legacy and 2020 Mazda6 are two attractive vehicles that stand out in a crowded market. They have roughly the same amount of interior space, so five passengers plus cargo can all be accommodated.

In terms of how they handle themselves, the biggest distinction between the two is that the Subaru Legacy has been built with symmetrical all-wheel drive. All-wheel drive isn't even an option on the Mazda6. For drivers who live in colder climates or who occasionally run into slippery conditions, this could be a deal-breaker.

Aside from the point about all-wheel drive, the Subaru and Mazda sedans have very similar engine options. Both have a traditional engine as well as a turbocharged version. When looking at the advanced engines, the Mazda's has more torque, whereas the Subaru's engine has more horsepower and is a little more efficient. The non-turbocharged engines are nearly identical in what they can do and how much gas they need.

In the safety and technology departments, the vehicles do well. The Mazda6 Sport is the only trim out of all the options that doesn't have smartphone compatibility, but it does have a touchscreen, Bluetooth, and an array of driver-assist technologies. The Subaru Legacy's higher trims have larger touchscreens than what is seen in the Mazda6, and this may be important to some customers.

Since the Legacy and Mazda6 are so evenly matched, the final decision may be influenced by stylistic preferences. The Mazda6 is a little more sleek and modern than the Subaru. It may appeal to people with more refined tastes, since it showcases clean lines and has an upscale cabin. The Legacy isn't shabby at all, but it does feel like the more practical of the two sedans.

Save Money on a 2020 Subaru Legacy:
Are you Shopping for a New Vehicle? Find the Best Deals with "Free - No Hassle" Prices Quotes.