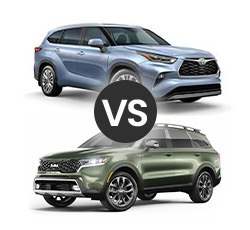 2022 Highlander vs Sorento - How Do They Stack Up? Which is Better?

Three-row SUVs have become very popular. They are a necessity for some households, and for others, they can simply be very convenient to have. The Toyota Highlander and Kia Sorento are two good options for those looking for vehicles with an extra row of seats. These models seem to be fairly rugged while offering a lot of high-end features, and they're known to be safe and reliable.

Both vehicles come with a few available powertrains. They're available with standard powertrains as well as hybrid ones.

The Toyota Highlander can be powered by a 3.5-liter V6 engine. This engine delivers 263 pound-feet of torque and 295 horsepower. Many people will be very pleased with this type of performance. Toyota has paired this engine with a Direct Shift eight-speed electronically controlled automatic transmission.

The other option for the Toyota is a 2.5-liter gas-powered engine that works tougher with a set of electric motors. This system can create a total of 243 horsepower, which is a solid amount. With the hybrids, there's an electronically controlled continuously variable transmission.

Under the hood of the Kia Sorento, there could be a 2.5-liter engine. It provides 191 horsepower and 182 pound-feet of torque, and it's been matched with an eight-speed automatic transmission.

Alternatively, there could be a 2.5-liter turbocharged engine. Having the turbocharger makes a significant impact on performance. This turbo engine can make 281 horsepower and 311 pound-feet of torque. This is a considerable improvement over what the other engine can do. The regular engine uses an eight-speed automatic transmission, and the turbocharged engine works with an eight-speed DCT automatic transmission that's a bit more performance-oriented.

Finally, the Sorento can be equipped with a hybrid powertrain. This powertrain uses a 1.6-liter turbocharged engine along with an electric system. The result is a net horsepower of 227 and 258 pound-feet of torque.

With all of these versions, all-wheel drive is an option. All-wheel drive decreases fuel efficiency by a small margin, but it increases traction. In some circumstances, all-wheel drive can prove to be very useful since it can send power to all four wheels instead of just the front two wheels.

There are slightly different types of all-wheel-drive (AWD) systems available in the Highlander and the Sorento. Hybrid Highlanders would have an electronic on-demand AWD system, while traditional Highlanders can either have a regular AWD system or Dynamic Torque Vectoring AWD. This advanced AWD would be able send more power to the right or left wheel, depending on which wheel can use it most. A hybrid Sorento has a typical AWD system, while a non-hybrid can be equipped with a torque-vectoring AWD with center-locking differential. This is useful when dealing with rugged terrain and tough conditions.

A few Highlanders can be enhanced with a special suspension. They can have a sport-tuned suspension that results in sharper handling. This type of suspension is firmer than a regular one, and as a result, stability is enhanced when making steep turns or cornering at higher speeds.

There are several drive modes that people can take advantage of when behind the wheel of either vehicle. The Sorento has a program called Drive Mode Select. Choices are Eco, Sport, Comfort, Smart, and Custom, with non-hybrid AWD models also having Snow mode. Comfort would likely be the mode that most drivers use on a regular basis. Eco mode increases efficiency, while Sport does the opposite so that it can provide a more exciting ride. Smart mode automatically adjusts to the situation and can adapt to a particular driver's habits, and Custom allows drivers to come up with their own settings.

Sport, Eco, and Normal modes are available with the Highlander as well. Hybrid versions would have the addition of EV mode, or electric vehicle mode. This can be used for limited periods of time to maximize use of the electric system. Non-hybrids with front-wheel drive would have Snow mode in case they ever have to face slippery roads in the winter. Hybrids with all-wheel drive get to have Trail mode to enhance their traction, and non-hybrids with all-wheel drive have a Multi-Terrain Select dial that provides some extra modes. Those modes can be selected if the SUV has to make its way through or over mud, sand, rocks, or dirt.

With vehicles of this size, it's to be expected that they can tow a decent amount of cargo. A hybrid Highlander can tow up to 3,500 pounds, and that capacity increases to 5,000 pounds with the non-hybrids. This is significantly more than what a Sorento can haul. A Sorento with the regular engine can pull up to 2,000 pounds; this is the same capacity as that of the hybrid Sorento. A turbocharged version can tow up to 3,500 pounds. This capacity is definitely better but not that impressive compared with the Highlander's abilities.

Going along with what was detailed in the previous section, the Toyota Highlander is going to be much more responsive than the standard Sorento. With the turbocharger, the Sorento gives the Highlander some competition.

With space for three rows of seats, the Sorento has an overall length of about 189 inches. That makes it five inches shorter than the Highlander is. The Highlander is also a bit taller and wider than the Sorento is. Most people will not be able to notice the difference with these dimensions, except possibly when parallel parking or when parking in a smaller garage.

Ground clearance on the Highlander is a solid eight inches. A front-wheel-drive Sorento sits 6.9 inches off the ground. This ground clearance is on the lower side in the world of SUVs. One of these Kias with all-wheel drive would ride higher, having a ground clearance of 8.2 inches.

The interiors of these vehicles look quite spacious. They each have very comfortable first and second rows, with smaller third rows. Third-row leg room in the Highlander is only 27.7 inches. Those riding in the back of the Sorento have a bit more space with 29.6 inches of leg room. First- and second-row Sorento passengers have 41.4 and 41.7 inches of leg room, respectively. Those corresponding numbers for the Highlander are 42 and 41 inches.

The Highlander can actually come with two different seating configurations. One is to have a bench seat in the middle row, and the other is to have a pair of captain's chairs in that row. This second configuration would decrease total seating capacity to seven, but it would open the cabin and give those in the back a little more room to move around and stretch out.

The Sorento, too, can have a pair of captain's chairs in its middle row. This would reduce seating capacity to six. Many people feel that this results in a more executive look, and if that extra seat isn't needed, it doesn't need to be there.

It's pretty easy to fold the rear seats down. The third rows of the Sorento and Highlander have reclining seatbacks, and the second-row seatbacks can be slid and folded forward very quickly.

Technology can make such a difference in daily routines. With standard Android Auto and Apple CarPlay, it's simple to stay in touch with others, keep up with messages, and find things to listen to while driving in these SUVs. Most Toyotas have eight-inch touchscreens, with some having 12.3-inch touchscreens. SiriusXM, Wi-Fi Connect, and Amazon Alexa are all standard on the Highlander, and so are five USB ports. Wireless charging, an 11-speaker JBL sound system, and integrated navigation are optional.

Wireless charging is also available on the Sorento. Most of its trims have six USB ports, though the entry-level one only has three. Like the Highlander, the Sorento comes standard with six speakers. It can be upgraded with a 12-speaker Bose audio package.

The entry-level Sorento has an eight-inch touchscreen, but it lacks SiriusXM. All the other trims have SiriusXM plus navigation and 10.25-inch touchscreens, so they're quite impressive.

Toyota and Kia are companies that have focused on safety. Both the Highlander and the Sorento have numerous driver-assist technologies that are ready to jump into action at any moment. Automatic emergency braking and forward collision warning can prevent many kinds of accidents, and so can lane departure warning and lane keeping assist. With both SUVs, blind-spot monitoring and rear cross-traffic alert are found in mid-level and higher trims, but the Sorento has the corresponding mitigation systems.

Further, the Sorento has a driver attention warning program, and it can even alert the driver when the leading vehicle has started moving, such as after having been stopped at a traffic light. This vehicle can be upgraded with navigation-based cruise control, parking distance warnings, reverse automatic braking, and a surround view monitor.

The Highlander comes standard with adaptive cruise control, though it's not linked to the navigation system. The Toyota also has a program called Road Sign Assist so that it can remind drivers about signs that they may have missed. Available upgrades for the Highlander include a surround view monitor and a ten-inch head-up display.

People should expect to pay more for the turbocharged engine. Sorento models with the more powerful engine cost around $40,000 or more. The most expensive one is the X-Line SX Prestige with AWD, and it costs $43,190. The two hybrid Sorento's cost $34,090 and $36,090, with AWD requiring an additional fee.

For the Toyota Highlander, the price starts off at $35,855. This is a fair amount more than the cost of the Sorento, but it's justified because of the Toyota's stronger engine and bigger cabin. The top-of-the-line Highlander is the Platinum, which costs $48,010. A hybrid version of the Platinum comes in at $49,510.

Both companies have equipped their lower trims with advanced technology and comprehensive safety systems, and they've given their higher trims many luxurious amenities, such as heated and ventilated front seats, heated second-row seats, and leather upholstery. These upscale SUVs from Toyota and Kia have panoramic sunroofs and hands-free power liftgates as well.

It's almost too close to call when being asked whether the Highlander or the Sorento is better. It may come down to performance and size. The turbocharged engine of the Sorento does a good job of generating power, and it's pretty even with the Highlander's engine in terms of capability. However, the Highlander has the greater towing capacity, and it clearly outperforms the Sorentos that have the non-turbo engines.

It's nice that customers have hybrid options to consider. The Sorento's hybrid model is slightly more efficient than the Highlander's, and this may matter to some buyers. The same can be said for the non-hybrid versions of the Sorento and Highlander, with the Kia SUV coming out ahead in regards to efficiency.

Perhaps the biggest distinction between these two vehicles is that the Highlander has three seats in its back seat while the Sorento only has two. Some people may really need this extra seating position. In addition, the Highlander has more maximum cargo capacity, so it may be more useful to some. On the other hand, there are plenty of people who don't necessarily need a huge cabin and would be perfectly happy with the size of the Sorento.

The case for the Sorento is certainly helped by its lower starting cost. As long as drivers don't mind having a little less power, then the Sorento may be a practical choice.