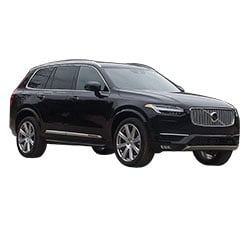 Should You Buy a 2016 Volvo XC90? Here Are Some Reasons For and Against

The 2016 Volvo XC90 is an extremely stylish crossover SUV. With the ability to seat up to seven passengers, the new XC90 is a great option for large families. Drivers will surely like this crossover’s responsive performance on the road. While the standard engine is muscular, the available hybrid engine is even more powerful. Volvo’s groundbreaking safety features take the XC90’s appeal to the next level. On the inside, the driver will have access to several luxurious features.


The 2016 Volvo XC90 was completely redesigned for the 2016 model year. This is good news for the car shoppers who are looking for a fresh crossover.

The XC90’s base four-cylinder engine is extremely unique. Not only does it use a turbocharger, but it is also integrated with a supercharger. The exotic engine is able to pump out a capable 316 horsepower and 295 pound-feet of torque. During acceleration testing, the crossover scampered to 60 mph in 6.3 seconds. Not bad for a 4,400-pound vehicle.

Although the plug-in hybrid model uses the same engine, it also benefits from an electric motor. When traveling in the electric-only mode, the 2016 Volvo XC90 has about a 25-mile driving range. Due to the addition of the electric motor, the total output increases to a whopping 400 horsepower. Expect the hybrid to be just a tad quicker than the standard version.

All versions of the 2016 Volvo XC90 have a 5,000-pound towing capacity. This means that the XC90 is nearly as effective as a pickup truck. From boats to motorcycles, there is a long list of things that can be pulled around by the XC90.

According to the EPA ratings, the standard XC90 should deliver 20 mpg in the city and 25 mpg on the highway. An engine stop-start system enables the crossover to minimize fuel consumption in the city. Furthermore, the eight-speed automatic transmission helps keep the XC90 in the most efficient gear.

Drivers will not have to worry about traction. The 2016 Volvo XC90 comes standard with a capable AWD system. While the XC90 is not an extremely rugged SUV, it is an exceptional performer in bad weather. Even on snowy days, drivers will be able to venture outside of their homes.

Volvo’s R-Design package gives the XC90 an even sportier appearance. Equipped with 20-inch wheels and a unique grille, the R-Design model will attract a lot of attention. On the inside, the crossover elevates its fun factor by providing a race-inspired steering wheel and sport seats. Shift paddles also come standard on the R-Design trim.

The 2016 Volvo XC90 offers an elite level of passenger safety. When cruising around town, Volvo’s City Safety system can bring the crossover to a stop if needed. Meanwhile, the Run-Off Road system effectively prepares the passengers for a crash. The front seats were actually designed with special shock absorbers. Blind-spot monitoring and a surround-view camera are also available.

8) An Array of Standard Features

While buyers can opt for quite a few equipment packages, the base Momentum model provides more than enough luxury for most people. A high-definition display screen allows the driver to clearly see all of the graphics. Families will also love the panoramic sunroof. Some of the other nice features include a 10-speaker sound system, navigation, a rear-view camera, and leather upholstery.

Serious music fans will love the optional Bowers & Wilkins audio system. The 1,400-watt sound system is remarkably clear and accurate. When the driver cranks up the volume, the cabin transforms into a stadium on wheels. A total of 17 speakers are appropriately placed throughout the interior.


Designed with adaptive dampers, the air suspension system provides a remarkably comfortable ride. When equipped with the air suspension, the 2016 Volvo XC90 becomes a superb cruiser. Families will be able to enjoy the entire trip without experiencing any unnecessary bumpiness.

Not only is the Inscription model the most luxurious version, but it is also the most expensive. Depending upon the various upgrades, some buyers may shell out more than $60,000 for the top-of-the-line trim.

2) Not Built for a Hardcore Off-Road Excursion

The 2016 Volvo XC90 will perform well on the average off-road trail. However, the SUV is certainly not designed to travel on an extremely rugged landscape.

Only a single USB port can be found inside of the XC90. This could be an annoying problem for some families.

Some of the key competitors include the Acura MDX, the BMW X5, and the Buick Enclave. When compared to the competition, the 2016 Volvo XC90 stands out with its exceptional safety profile. The XC90 is also less expensive than the Mercedes-Benz GL-Class and the BMW X5. While the new Buick Enclave is an affordable option, it simply cannot match the XC90's technology.

Understandably, a lot of car shoppers are excited about the release of the all-new 2016 Volvo XC90. The crossover SUV’s improved styling and world-class safety features will appeal to plenty of families. While all of the trims are attractive, the R-Line model is a true showstopper. Rear-seat passengers will be rewarded with even more legroom than before.
View MSRP VS Dealer Invoice VS True Dealer Cost Pricing:
▷ 2016 Volvo XC90 prices
See other S60 model years::
▷ 2014 Volvo XC90
2016 Volvo Buying Guides: