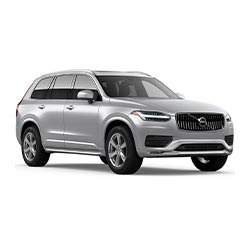 Should You Buy a 2022 Volvo XC90? Here Are Some Reasons For and Against

Volvo has a deep line of luxury vehicles. The XC90 is the largest of its three SUV offerings, and it is the only member of the XC line to have three rows. As the biggest model, it commands the highest starting price, but also the most extensive feature set and the most high-end interior.

For the 2022 model year, the XC90 has just one notable feature change. Previously, onboard navigation was an advanced, optional feature that did not appear on all trims. Now, it is a standard feature that all trims have. While it is only one feature, navigation is a fairly pricey one on most SUVs, so to have it standard adds to the value of the XC90 and makes for a more appealing tech package. The XC90 last got a notable refresh for the 2020 cycle.

The XC90 has three different engines-- the T5, T6, and T8. They have a great power array. The T5 is a turbo V4 worth 250 horsepower, which is good, but it is the two higher engines where the real power lies. The T6 adds a supercharger to the T5 and pushes the power to 316 horsepower. The T6 also comes with all wheel drive. The T8 is the hybrid choice and it adds an electric motor to reach 400 horsepower. The T8 comes with all wheel drive as well, and both the T6 and T8 provide excellent power.

The XC90 has a great selection of tech features. It has a 9-inch touchscreen, Apple Car Play, Android Auto, wireless charging pads for devices, satellite radio, and more. The touchscreen is laid out like a tablet, and just about all of the controls for each feature run through it-- there are few physical controls on the dashboard. Most of the features are packed into the base trim, with sound system upgrades, a digital instrument display, quad climate zones, and a moonroof. This is a very generous tech lineup and speaks to the value of the XC90.

As a family vehicle, the standard for the XC90 to have good safety is high. It performs very well in crash tests and got the Top Safety Pick+ rating, the highest rating, from the Insurance Institute for Highway Safety. The automated safety features include adaptive cruise control, lane departure warning and lane keep assist, automatic emergency braking, blind spot monitoring, and just about every contemporary safety feature comes standard on the XC90. There are a few upgrades like a heads up display and parking assist, but these are not, strictly speaking, safety features-- Volvo doesn't make you take a top trim to get a safe vehicle.

The XC90 is a three-row SUV with a ton of interior space as well as cargo space. With the second and third row folded down, it has 85.7 cubic feet of space, which is way more than any other SUV of this class. You can configure it to seat seven or six people by changing the middle row to captain's chairs rather than a bench. In any case, the rows have plenty of space for passengers to be comfortable as well as room to carry any kind of cargo, including furniture and other big, bulky items.

One of the most important weaknesses of three-row SUVs is the fact that they consume a lot of gas. For a family with the need for that much space, saving money on fuel is important. That's why the T8 hybrid engine is so attractive. It's the most powerful drivetrain for the XC90 and also the most efficient. It is a plug-in hybrid that takes about six hours to reach a full charge. The fuel efficiency depends on the charge amount and the mode, but it is sure to bring down how much gas the XC90 uses in addition to being the beefiest engine to choose from with the SUV.

The XC90's seating is extremely comfortable thanks to its high-end materials and upholstery. On top of that, the large amount of space allows for plenty of legroom and headroom. The climate controls and other elements in the interior cap off the comfort with an elegant and relaxing feel. When taking passengers on a long trip, it is important that it be comfortable. The high level of comfort also drives home the fact that the XC90 really is a luxury model that should be enjoyed by both the passengers and the driver.

The XC90 has a minimalist design, which gives it a contemporary feel and lets the tech and other features really shine. The lack of ornamentation also ensures that the XC90 has lots of room for you to use. The sleek interior is made up of high-end materials like leather and aluminum which enhance comfort as well as feel. If you are turned off by the overloaded and heavily decorated interiors of other SUVs, then the XC90's design will be right up your alley. This is also a great way to show that the most important elements in the design can stand out without needing extra decoration.

There are several ways to customize the XC90 so that it fits your preferences. There are four different trims to choose from: the Momentum, the Inscription Expression, the Inscription, and the R-Design. Then you can choose one of the three engine choices. Lastly, pick whether you want the six or seven-seat version. There are also packages and options to add on depending on which trim you chose. This means that there are many ways to get the XC90 that fits your needs best and also respects your budget the most.

The XC90 is excellent when it comes to giving you value for money. The abundant standard safety, tech, and comfort features mean that the base trim has a lot included in it. Most buyers won't need to go to a higher trim to get what they want. When it comes to SUVs with three rows, especially luxury models, the base prices tend to be high compared to other segments. That means it is very important to make sure that the value for money makes the extra cost worth it. In the case of the XC90, it does.

While it might not be the most common use of the XC90, the SUV can do some towing. The T6 and T8 engines can both manage 5,000 tons of tow capacity. The T5 engine can do the same thing if it is also equipped with the all wheel drive feature. Otherwise, its capacity drops to 4,000 pounds of towing.

The infotainment system for the XC90 is not the best. The controls can be hard to use, especially the climate controls. This is the part of the design that could use the most work. It is especially hard to use if you are the driver and trying to concentrate on the road while reaching for the controls at the same time.

The XC90 has good engine power, but the handling does not quite match up. The XC90 can feel a little rough in terms of ride quality and the turns don't feel as good as straight-line driving. The configurations that use larger wheels handle rougher, and it is a good idea to avoid them for that reason. Having handling that does not feel the best is not unusual for three row SUVs, and the XC90 does not escape that concern.

The hybrid engine that the XC90 has access to does well in terms of fuel economy, but the two gas engine choices are somewhat heavier on gas. As with the handling, this is fairly common for three row SUVs, but the XC90 lags the pack a bit when it comes to how much gas these engines use. The T6 engine in particular gets at best 27 miles per gallon. There are SUVs that do worse, but also some that do better, and the standard for fuel efficiency is rising each year, so the XC90 cannot afford to fall behind.

The MDX is the three row model from Acura, which is another luxury brand. These two models have a lot of overlap-- similar feature lists, performance, and interior quality. The XC90 does have a hybrid drivetrain choice, which you can't get on the MDX. The XC90 also has the MDX beat in terms of interior room.

The Infiniti QX60 is a less expensive alternative to the XC90. It has fewer features and doesn't allow for a choice of engines, but the lower price point could be attractive for buyers on a budget. It's harder to customize as well, with more limited packaging. When it comes to luxury models, getting the best value usually does not come at the bottom of the price range.

The XC90 is one of the most appealing choices for people who are looking for a three row luxury SUV. It is loaded with features and has an upscale, clean interior along with great performance choices. Other SUVs might be faster or loaded with more features, but none of them provide the most success in these areas with this price point. The XC90 is not quite as dominant as the smaller XC models due to more competition in this large, three-row segment, but it is still a strong choice for a family vehicle.

View Pros and Cons for other Volvo Models: