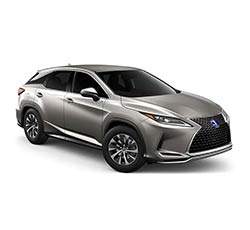 Price Tip:
To find the best possible price on a new Lexus RX, shop prices online first. Get up front pricing before you walk into a dealership. We recommend the following free services; Car Clearance Deals,   Edmunds,   NADAguides,   Motortrend  &   CarsDirect
These services will offer you the lowest prices and supply you with multiple competing price quotes. You will know the best price before you visit the dealer.
How to Calculate The Dealer Cost of a Lexus RX:

The Lexus RX is a two-row SUV that feels elegant with all of its high-end amenities. It has a comfortable cabin and offers a smooth ride, and it has good capability.

There are two main versions. The first one has two rows of seats, while the other has three rows of seats. This would give it a seating capacity of seven. The three-row version distinguishes it from the others in name by having the "L" designation attached to it. For example, there's both a 350 model and a 350L version.

The length of the two-row RX is 192.5 inches, while a three-row has a length of 196.9 inches. They differ in height by less than half an inch; it's actually the two-row version that's the taller one.

A difference in length of 4.4 inches doesn't actually seem that significant. Obviously, this amount of space is not enough to fit another row. To combat this problem, Lexus has modified the extended-length versions. While the two-row models have 38 inches of second-row leg room, the three-row versions only have 30.9 inches of second-row leg room. This isn't that much room, but it allows there to be a third row of seats.

Then, there's a hybrid system that's available. The hybrid models are the 450h models. They use 3.5-liter V6 engines as well, but they also have electric motors. This hybrid system allows for 308 horsepower.

A final note related to this topic is that the standard engine can be paired with either front-wheel or all-wheel drive. The hybrids are automatically set up with all-wheel drive. All-wheel drive comes with an electronic differential lock.

The technology package on this Lexus is pretty impressive. The standard package consists of an eight-inch display, voice recognition, Apple CarPlay, and Android Auto. In addition, SiriusXM and HD Radio are included with every model.

Recognizing that full cabins usually mean that there are many mobile devices in the vehicle, Lexus has given the RX six USB ports and optional wireless charging. Wi-Fi capability is another element that's included, and this can really open up entertainment options for passengers.

Something else to appreciate is the Lexus Enform Remote service. It lets users use their smartphones or other mobile devices to communicate with their vehicles. Through an app, people can lock or unlock their doors, start their engines and get their climate control systems going, check on their fuel level, schedule service appointments, and more.

Navigation is an option, as is a larger 12.3-inch touchscreen. If anyone is interested, either a 15-speaker or a 12-speaker sound system can be added on to the package.

The lineup starts out with the RX 350. This base trim has a full set of driver-assist technologies, along with dual-zone climate control. The driver can take advantage of a power-adjustable front seat and an auto-dimming rearview mirror as well as a power-adjustable steering column. Seats are wrapped in NuLuxe material, which is a synthetic leather.

The 350 F Sport is upgraded with a memory system for the driver's seat, and that memory system works with the side mirrors and steering wheel, too. The F Sport has extra features that make it seem more like a sports car. Those include enhanced bolsters in the front seats and performance dampers. Plus, it has 20-inch wheels, black side mirrors and a black headliner, and aluminum pedals.

For those who really prefer that dark aesthetic, there's the Black Line Special Edition. It comes with black wheels, a gloss black grille, other black accents, and black seats with white accents and gray accent stitching. It treats the driver to a heated steering wheel. This trim gets to have aluminum roof rails, and one of its most attractive elements is a power moonroof.

There are many ways in which the Lexus RX can be customized. For instance, trims that don't come standard with the moonroof have it as an option. Other upgrades include a panoramic glass roof and premium LED lights.

Note: All Lexus RX MSRP, invoice and dealer cost dollar figures above are subject to change without notice.