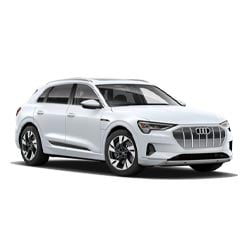 Should You Buy a 2021 Audi e-tron? Here Are Some Reasons For and Against

The 2021 Audi e-tron is poised to change how people think about SUVs. As a purely electric vehicle, the e-tron is a very intriguing choice. Anyone with concerns about how capable electric vehicles can be should put their doubts aside. The e-tron is more powerful than most vehicles on the roads today, and it has a solid towing capacity and quick acceleration. It also has plenty of luxurious amenities.

There have been a lot of changes to the e-tron for 2021, all to the consumers' benefit. First and foremost, the starting price has been dropped by almost $9,000. This makes the e-tron within range of significantly more buyers. Audi was able to reduce the price so dramatically by making a Premium trim. Previously, the Premium Plus was the cheapest e-tron available.

Other improvements for 2021 are important as well. The overall range of the SUV has been increased by almost 20 miles. The Premium trim can come with a Convenience Plus package that contributes to a bolder look and gives drivers more safety components. Finally, there are now charging ports on either side of the e-tron's higher trims to make charging more convenient.

People might be surprised to learn that the 2021 Audi e-tron can generate more than 400 horsepower. It can have nearly 500 pound-feet of torque, and it can hit a top speed of 124 miles per hour. This is a main reason why the e-tron could be a game changer. Its numbers are far from ordinary, and this level of performance is usually found in tricked out SUVs and sports cars. The e-tron is able to do so much using only electric motors.

2. Give the Vehicle a Boost

The e-tron has something called Boost mode. It's a special setting that can be accessed by selecting the Sport driving mode and depressing the right pedal as far as it can go. When Boost is engaged, the SUV can achieve its full potential for a short period of time. It would be fun to use Boost mode on an open highway or long, straight country road.

The e-tron doesn't just look like a good-sized SUV, but it also acts like a heavy-duty vehicle in some ways. It has a towing capacity of 4,000 pounds, which is more than what many of its traditional counterparts offer. Yes, most people who drive e-trons won't actually tow that much on a regular basis. However, it's nice to have the option whenever people need to haul equipment to a worksite or bring their grown-up toys - like boats and jet skis - with them on trips.

4. Power Sent to All Four Wheels

Equipped with Quattro all-wheel drive, the 2021 Audi e-tron is ready to react to any situation. Typically, when there's no issues with the road and the vehicle is traveling in a straight line, the e-tron does just fine with power being sent mostly to its rear wheels. If the SUV heads into a turn at high speeds, runs into some wet weather, or has to deal rugged terrain, power can be redistributed. It's been shown that Audi's Quattro system is extremely fast to respond and can do a great job at maintaining traction.

With some SUVs, there seems to be more space than there really is, and this is evident once three adults try to squeeze into the back seat together. Fortunately, this isn't the case with the new e-tron. Audi has given its electric SUV a spacious cabin. In the front, there is over 40 inches of leg room, and in the back, the amount of leg room is almost the same. Larger passengers should be able to fit comfortably in the second row.

There have been some qualms about how practical 100% electric vehicles can be. After all, no one wants to get stranded on the road having run out of power. With the Audi e-tron, this shouldn't be a concern since it has an estimated range of 222 miles.

The e-tron can be charged at home, either through a regular outlet or a special 240-volt (Level 2) charging station. Usually, owners charge their e-trons over night using the faster type of outlet. There are also more and more public charging stations that e-tron drivers can utilize. There's an app that can be used to find nearby stations.

Audi is known for building beautiful vehicles. With the e-tron, there is the unmistakable Audi grille and curvature of the body, and there are aluminum roof rails, aluminum trim, and a rear spoiler on the tailgate. The SUV has 20-inch wheels as a standard component, and they feature a bi-color design with five double spokes.

There are four different temperature zones in the 2021 e-tron. This gives everyone (except the middle passenger in the back) the opportunity to have a say in how warm or cool their respective areas are. In the winter, standard heated seats and a heater steering wheel can add to the coziness in the cabin. In the summer, front passengers in select e-tron trims can turn on their seats' ventilation systems.

The primary job of an automaker is to build vehicles that are safe and reliable. Audi has certainly meet those requirements with the e-tron, and some would argue that it's gone above and beyond.

All e-trons have Audi pre sense front, which means that they can sense when there's about to be a frontal collision. The SUV can warn the driver about this issue, and it may hit the brakes to reduce the chances of an accident. Similar systems are in place all around the Audi. The vehicle can make it much less likely to back into another vehicle or change lanes when there's someone in a blind spot. With the parking system in the Audi, drivers can be alerted when they're getting too close to other vehicles in front or behind them. The available 360-degree perspective is very useful as well.

It seems like the e-tron has a high-tech feature in every one of its corners. Starting in the back of the vehicle, there's a power tailgate that's quite convenient. Behind the steering wheel, there's a digital instrument panel that Audi calls its virtual cockpit. Navigation is standard, as is smartphone connectivity. The 10.1-inch screen kind of acts like a showpiece, and through it, people can access certain apps, control music playback, make calls, and more. Even the headlights have cool features built into them, as they have bright LEDs and can have animation.

There's something to be said for making a vehicle that only runs on electric power. It's an innovative and bold idea, and it's a decision that pushes the industry forward. However, the fact remains that people might be hesitant about going 100% electric. There are plug-in hybrids in the market that run on both electric power and gasoline power, and these may be more sensible for a good chunk of consumers.

With all the bells and whistles that it comes with, it's not a shocker that the Audi e-tron has an expensive price tag. The Prestige costs almost $80,000, the Premium Plus costs about $75,000, and the Premium has a starting price of approximately $66,000. These numbers are more than a little high from the perspective of the average consumer.

As mentioned at the beginning of this overview, the e-tron's starting price has dropped significantly compared with 2020. Of course, people can just get the most basic version of the e-tron, but they may be tempted to upgrade it with a package. Note that the Convenience Plus package costs $3,500. It does come with a top view camera system, black accents, and some extra driver-assist systems, but it's still fairly expensive.

The market is quickly adapting to changing consumer preferences. More companies are seriously looking into building purely electric vehicles if they haven't started already, and there are few contenders already available in the market alongside the e-tron.

Tesla's Model X is almost like the gold standard in the electric SUV class. The Tesla company is known for pushing boundaries, and its Model X is very efficient. It might be a little too futuristic for some consumers, especially the way its rear doors open up like wings. Its starting price is also higher than that of the Premium e-tron.

Yes, Audis are really not comparable to Hyundais from most perspectives. One is a luxury brand while the other appeals to the masses. However, since Hyundai does make an electric version of its Kona SUV, it might be useful to review how it compares to the e-tron. The primary way in which the e-tron pulls ahead of the Kona EV is related to horsepower. The Kona only has about half of the available horsepower of the e-tron. Further, it doesn't have the fancy components that the e-tron has, such as standard leather seats, front seats that have an available massage function, and animated lights.

There's no question that the e-tron is an interesting vehicle. Purely running on electric power, it's ready to tackle challenges while offering up a smooth ride. The Audi e-tron is elegant and sophisticated in addition to being athletic and fast. It has a great combination of features, and it would be a fun SUV to drive as long as people can afford it.


Save Money on a 2021 Audi e-tron:
Are you Shopping for a New Vehicle? Find the Best Deals with "Free - No Hassle" Prices Quotes.