2016 Chevrolet Tahoe Pros vs Cons. Should You Buy? 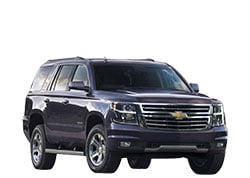 Should You Buy a 2016 Chevrolet Tahoe? Here are the Pros and Cons

For 2015, the Tahoe got a full redesign, with better focus directed towards its mission of offering comfortable seating for eight, while having the capacity of towing some 8,500 pounds. Also available is 9-passenger seating on the Tahoe base models that come equipped with an additional/optional front bench seat.

Test drivers have praised the potent V8 engine, the composed handling and comfort of the 2016 Chevrolet Tahoe. A sharp and new look drivetrain that has new technology options are some of the features on this new Chevy.

Critics note that in most settings:

The standard 5.3-liter V8 engine of the 2016 Chevrolet Tahoe comes with more than sufficient muscle to haul cargo, move people or tow a large trailer without really having to break a sweat. The 6-speed automatic is excellent for fast acceleration.

According to auto reviewers, the 2016 Chevrolet Tahoe's steering is quite responsive, delivering good feedback.

The fuel economy of the 2016 Chevrolet Tahoe is greatly enhanced by a system known as Active Fuel Management.

Inside this car model you will get quality materials and more colors forming a thoroughly modern center console and dashboard. Test drivers have said the cabin of the 2016 Chevrolet Tahoe is among the best in this vehicle class.

It brings to you:

According to auto reviews, the new color MyLink touchscreen is among the most user-friendly and brightest infotainment systems.They are also impressed with the cabin’s features like comfortable front seats and a quiet ride.

They all agree that the build quality of the 2016 Chevrolet Tahoe is excellent while the layout is very well thought out.

According to reviewers, the MyLink infotainment system is attractive, simple to set up and use. Some test drivers have indicated that the controls on the center stack are easy to reach and that some controls have been complemented by physical knobs and buttons.

Much of the competition has in fact embraced the fold-flat seat technology for over a decade. However, this becomes the very first time when you’ll not need to remove the 3rd-row seats of this big Chevy so as to maximize your cargo space.

The 2016 Chevrolet Tahoe has a capacity of 8 and comes with front seats that are power-adjustable. The majority of buyers are going to find the 2016 Tahoe’s seats quite comfortable even while on long cruises.

This truck will eat up the miles while you enjoy commanding road views that have made the Chevy crossovers and SUVs so popular.

The current Tahoe has been given the 2nd best rating by the NHTSA. The car has received four stars out of the possible five overall rating for a variety of crash tests.

Although there is no current reliability data for the new Tahoe, its previous models have been deemed to be very reliable.

Reasons Not to Buy a 2016 Chevrolet Tahoe – The Cons

A good number of drivers have made it known that the 2015 Tahoe’s rear visibility was challenging, and there seems to have been little improvements in the 2016 Chevrolet Tahoe. Drivers are also not very impressed with the occasionally frustrating infotainment technology and telematics.

Critics feel that the fold-flat 3rdvrow is sort of cheat, and the placement over rear axle raises has tended to raise the cargo floor to a high level that is absurd.

Automotive journalists agree that the 3rd row is cramped and is perhaps best suitable for children.

Auto reviews have compared the 2016 Chevrolet Tahoe with the 2016 models of the Buick Enclave and the GMC Yukon in terms of critics’ rating, safety, performance, passenger capacity, overall rating and more.


Overall rating for the Chevrolet Tahoe is at 8.4; same as for the Enclave, but slightly below the Yukon’s 8.6

The nifty moves and a sleek yet commanding car profile appears to ensure the persistent popularity and reputation of this SUV family-oriented Tahoe model. Auto journalist has viewed the 2016 Chevrolet Tahoe as a worthy competitor for the Buick Enclave, Ford Expedition, GMC Yukon, Nissan Armada, and the Toyota Sequoia. However, nothing has so far sold as well as the 2016 Chevy.

• 2018 Chevrolet Tahoe trims. What you get with each trim configuration.