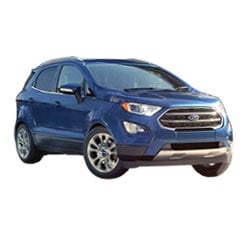 What 2019 Ford Ecosport Trim Level Should you Buy? What is the Difference Between Trims?

Affordable yet packed with standard infotainment and safety features, the 2019 Ford Ecosport is a vehicle that a buyer on a tight budget will likely want to test drive. Its starting MSRP of just under $20,000 is sure to attract a lot of attention this year, but there is more to this vehicle than just a reasonable price tag.

From the base S to the line-topping Titanium trim, there are a number of standard and optional features that get packed in. However, there is a noticeable lack of advanced driver aids across the line-up. Sure, blind-spot monitoring is available, but you have to equip the Convenience Package on the SE or spend more on the SES or Titanium trim levels to get it.

The S, SE, and Titanium trims are all powered by the same 1.0-L 3-cylinder engine. This engine is considerably small and only produces 123 hp and 125 lb-ft of torque. The SES does get a bit of an upgrade with the 2.0-L 4-cylinder, which is able to generate 166 hp and 149 lb-ft of torque. While the 1.0-L is equipped with front-wheel drive, the SES gets standard all-wheel drive. Each of these two engine options is paired up with a 6-speed automatic transmission.

So, which Ecosport trim is the right one for you? With four different trim levels that are all pretty straightforward, making the choice might not be too difficult. However, you should know exactly what you are getting into before you commit to the investment. That's why we are going to break down each Ecosport trim and compare their different features and specs. By the end of this review, you should have a clearer perspective on which 2019 Ford Ecoboost trim is the best fit for your needs.

Compare the 2019 Ford Ecosport S vs SE Trim Levels. What is the difference?

The Ford Ecosport's base trim, the S, does not have as big of a list of standard features as the higher trim levels. But what it does have makes it worth its modest price tag. Of course, the SE is pretty reasonably priced as well and includes a few more standard and optional features than the S trim.

For starters, both the S and SE trims come with integrated blind spot mirrors, hill start assist, automatic start-stop, a rear-view camera, and an acoustic laminated windshield on the exterior. However, you can tell these vehicles apart by a few select differences. The S has black door handles and a black surround and bars on the front grille while the SE has body-color handles and a silver surround and bars. Also, the SE gains integrated turn signals on the exterior door mirrors, black roof rails, and fog lights.

On the inside, the S and SE are quite similar. Standard features on both vehicles include Ice Blue gauge cluster lighting, an exterior temperature display, illuminated vanity mirrors on the driver and passenger sun visors, and two USB charging ports. The SE, though, gets a few upgrades. For example, its steering wheel receives the leather-wrap treatment and gains a chrome insert with black stitching. There is also the option of having it heated. The SE also comes with a power moonroof with a sun shade and a push-button start. Ambient lighting is optional.

As far as infotainment features go, the S comes with a very standard array: a 6-speaker sound system with AM/FM radio and MP3 connectivity and the SYNC system. Since SYNC is one of the more functional and user-friendly systems out there, upgrading to the SE to get the standard SYNC 3 and optional SYNC Connect might be a wise choice for tech-lovers. On the SE, you can also opt for Wi-Fi hot spot connectivity, voice-activated navigation, and an 8-inch touchscreen display. SiriusXM Satellite Radio comes standard, but this likely won't be a deciding factor in why people will choose to upgrade from the S.

The S only has two packages that you can opt to equip: the Cargo Management Package and the Trailer Tow Prep Package. Since most drivers will likely not be buying this vehicle for any towing needs, the latter package seems somewhat pointless. The SE offers a few more packages that let you upgrade the cabin and armor the vehicle against cold weather.

Compare the 2019 Ecosport SE vs SES Trims. What is the difference?

One level up from the SE is the Ford Ecosport SES. This trim level has several interior and exterior features that distinguish it from the SE, but the biggest difference is, of course, the more powerful 2.0-L 4-cylinder engine. This provides more power to the wheels and distributes it evenly thanks to the standard all-wheel drive system. For those who want the utmost in driving performance, the SES is probably the best choice among this model year's line-up.

The SES is set apart from the SE by its magnetic painted grille bars and surround, standard blind-spot monitoring system with cross-traffic alert, rain-sensing windshield wipers, and roof rack crossbars. The SES looks sportier than the other trims, and it has the performance to back it up, of course.

On the inside, the SES upgrades net you an automatically dimming rear-view mirror, orange stitching on the leather-wrapped steering wheel, a standard 110-v power outlet, ambient lighting, and copper accents on the instrument panel. The heated 6-way power driver's seat gains a partial leather trim, marking a bit of an upgrade from the SE's cloth upholstery.

Of course, the SES integrates all of the optional infotainment features found on the SE into its standard list. The sound system gains an extra speaker, which was only optional on the SE. The Wi-Fi hot spot, SYNC Connect system, and voice-activated touchscreen navigation feature all come as a part of the overall set-up on the SES. Aside from the engine upgrade, this is what will attract many buyers to the SES over the S and SE.

Compare the Ecosport SES vs Titanium Trim Levels. What is the difference?

Last, but certainly not least, we have the line-topping trim known as the Titanium. This trim level has a starting MSRP that is about $6,000 more than the base S trim. While it still has the same under-powered engine as the S and SE, it does have a good amount of additional features. Still, you might find it hard to indulge in the Titanium since it does not share the SES's powerful 2.0-L engine as standard. You can, however, opt for this engine as well as the all-wheel drive system that comes standard on the SES.

Of course, there are some differences on the exterior of the Titanium that distinguish it from the other trims. The grille is trimmed with chrome instead of the SES's magnetic paint. The side mirrors come standard with a heating function, and the beltline molding is chrome instead of the molded-in-color black beltline molding on the SES. Additionally, the Titanium is set apart from the SES by its silver roof rack side rails and dark stainless painted aluminum 17-inch wheels.

The interior has a few nuanced changes as well, including perforated leather upholstery on the seats, a sliding arm rest on the center console, black stitching on the leather-wrapped steering wheel, and chrome door release levers. Other than that, a lot of the design elements remain the same as they are on the SES trim level. You will have to look to the infotainment features to find more significant upgrades to the Titanium trim, and even then, they seem to be few in number.

Take, for example, the audio system. The Titanium does get a nice upgrade to the 9-speaker B & O PLAY Premium Audio System that is crafted by HARMAN. This system includes a subwoofer for an extra boost in sound output. Otherwise, you can expect to find the same infotainment features that come on the SES.

One addition that might appeal to some drivers is the perimeter alarm. This is the only difference that the Ecosport Titanium has from the SES's list of standard safety features. The other standard safety features include configurable LED daytime running lights, an SOS post-crash alert system, and Ford's MyKey function. De-icer for the windshield wipers and a remote start system can be added on to the Titanium at your will.

As you can see, the 2019 Ford Ecosport's four trim levels have a reasonable amount of standard features for their budget-friendly prices. While you will not get everything that comes on more expensive vehicles, Ford seems to be trying to pack in as much as they can on the Ecosport. Still, the standard engine on the S, SE, and Titanium is rather under-powered, and the ride quality is not as refined as it is in some of the Ecosport's competitors.

Therefore, if you want to get the best overall performance from the Ecosport, the SES is the way to go. It lacks a few of the standard features you get on the Titanium, but the trade-off for the power upgrade is worth it.