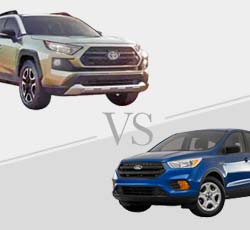 With so many options now available, it’s hard for some of today’s drivers to choose the perfect small crossover. However, the 2019 Ford Escape and the 2019 Toyota RAV4 stand out from the pack. Many people consider the RAV4 to be one of the top family vehicles in the segment. Meanwhile, playful handling and a powerful turbocharged engine make the Escape extremely fun to drive. To find out which crossover is the better choice, take a look at this head-to-head comparison.

The 2019 Ford Escape has three available powertrains. At the bottom of the lineup sits the standard 2.5-liter, four-cylinder engine. It’s rated to develop 168 horsepower and 170 pound-feet of torque. To enjoy slightly better performance and enhanced fuel economy, Escape buyers should upgrade to the 1.5-liter EcoBoost engine. Ford rates it to produce 179 hp and 177 lb-ft of torque. Atop the lineup sits a larger turbocharged engine, which pushes out 245 hp and 275 lb-ft of torque.

The only available power source for the 2019 RAV4 is a new 2.5-liter, four-cylinder engine. It generates a competitive 203 horsepower and 184 pound-feet of torque. Toyota decided not to offer the latest RAV4 with an optional engine.

In terms of overall performance, the Toyota RAV4 has a slight edge on paper. However, real-world performance is not very impressive. It takes around 8.9 seconds to hit 60 mph in the RAV4. Ford’s base four-cylinder engine is even more sluggish. However, upgrading to the Escape's range-topping engine really takes performance to the next level. A very brisk 0-60 mph time of 7.0 seconds makes the turbocharged Escape one of the quickest models in the segment.

All-wheel drive is optional on both crossovers. Owners should have no issues traveling in light snow. However, extremely rough terrain will likely pose a problem for the Escape. A higher ground clearance makes the RAV4 Adventure a better choice for tackling trails. Toyota also outfits the outdoorsy RAV4 Adventure with a specialized AWD system with torque vectoring. Like the Toyota RAV4, the Ford Escape has an effective braking system. During emergency situations, drivers will have a good amount of stopping power.

When it comes to fuel economy, the Toyota RAV4 trumps the Ford Escape. Front-wheel-drive trims can return a combined 30 mpg. Choosing all-wheel drive slightly lowers gas mileage to a combined 28 mpg. Even the most efficient Escape can only return a combined 26 mpg. Fortunately, both SUVs use regular unleaded as opposed to premium fuel.

The RAV4 offers above-average reliability. It received a 4.0 out of 5.0 rating in J.D. Power’s latest dependability study. J.D. Power gave the Escape a 3.5 rating. This means unexpected breakdowns will be rare. Whether you choose the RAV4 or the Escape, you’ll receive a 60,000-mile powertrain warranty.

Drivers will have no trouble maneuvering these two small crossovers. They are sized just right for the daily grind. A tight turning radius and electric steering make parking easier.

The Ford Escape especially shines in the handling department. It drives more like a sedan as opposed to a traditional SUV. Even when approaching curves, drivers can feel confident. Balance around corners is very good. Don’t expect the RAV4 to handle quite as well. However, it’s still an athletic crossover. Both the RAV4 and the Escape suffer from a slow steering system.

While a European-tuned suspension helps the 2019 Ford Escape to offer sporty handling, its ride comfort suffers. While on their commute to school or work, drivers can expect to feel a few bumps. This is especially true when traveling on uneven pavement. On the other hand, the 2019 Toyota RAV4’s ride comfort is outstanding. A well-engineered suspension helps the RAV4 to soak up the road like a more luxurious SUV.

Don’t expect these SUVs to deliver a whisper-quiet ride. Passengers will hear a fair amount of road and wind noise. Luckily, it’s not loud enough to drown out conversations. Upgrades, like active-noise cancellation and sound-reducing windshields, are not available.

You should be able to obtain a good driving position in either crossover. They both feature a highly adjustable driver’s seats and tilt-and-telescoping steering. With that said, taller drivers will be much happier behind the wheel of the new Escape. However, the Toyota RAV4 has the fewest blind spots. Large rear headrests in the Escape can block the driver’s rearward view. Side visibility in the Escape also is not as good.

Seat comfort is good in the Escape. However, narrow cushions make the Escape less recommended for bigger drivers. Expect the RAV4’s overall seat comfort to be a tad worse. After taking a 200-mile trip on the highway, drivers will notice the flatness of the RAV4’s seat.

Tall drivers will enjoy the Escape’s 43.1 inches legroom in the front. While there’s less legroom in the RAV4’s front seat, most people will be able to travel with ample knee space. In regard to overall passenger room, the RAV4 and the Ford Escape are fairly even. Both could benefit from more legroom in the backseat. There’s a little more space in the RAV4’s cargo area.

One of the Escape’s downfalls is the quality of its satellite radio. Signal reception is simply not good. On the bright side, the Escape’s available 10-speaker Sony audio system with HD radio sounds clear and powerful. Toyota’s available JBL sound system provides a subwoofer for enhanced bass. Both sound systems will enable music fans to crank up the volume.

The 2019 Toyota RAV4 is engineered to keep every passenger secure. It was awarded an NHTSA five-star overall safety rating. This SUV was also chosen as an IIHS Top Safety Pick+. While crash protection is very solid, IIHS testers found the SUV’s standard headlights to not be up to par.

An NHTSA five-star overall safety rating was also given to the 2019 Ford Escape. However, the IIHS was nearly as impressed with the Escape’s crash protection. This SUV received a poor rating in the organization’s passenger-side small overlap front test. Car shoppers should also take note of the Escape’s below-average child seat anchors.

While the Ford Escape’s safety scores are not quite as impressive, it does have one big advantage of the Toyota RAV4. Ford’s MyKey system enables parents to set restrictions for their teen drivers, including a speed limit. Toyota does not offer a similar system for the new RAV4.

Every driver will benefit from the RAV4’s’s available Toyota Safety Sense system. This valuable system is standard on every trim. It brings several key accident-avoidance technologies, including forward collision mitigation with pedestrian detection and lane keeping assist. Toyota also offers a nifty Line Tracing Assist feature. When using this system, drivers will remain better aware of the road markers. Drivers also rave about the effectiveness of the RAV4’s standard adaptive cruise control system.

Ford also offers the new Escape with an automated parking feature. Enhanced Active Park Assist makes parallel parking a lot less challenging. At the touch of a button, the system starts to steer the SUV into a suitable space. Built-in parking sensors make the system even more rewarding.

Listed with a starting price of $24,105, the 2019 Ford Escape proves to be a good bargain. Meanwhile, prices for the 2019 Toyota RAV4 begin at $25,650. Although the Escape may have a slightly lower MSRP, budget-minded car shoppers shouldn’t rule out the new RAV4. It packs many great standard safety features.

Let’s find out which base model offers the most value for the buck. Based on what the competition offers, the base Escape S is lightly equipped. Standard equipment includes a small 4.2-inch display, a single USB port, AppLink smartphone integration, and a six-speaker stereo system. Meanwhile, Toyota equips the base RAV4 with a 7-inch touchscreen interface with Apple CarPlay, a six-speaker sound system, and two USB ports. A more impressive standard infotainment system makes up for the RAV4’s higher MSRP. Don’t forget about the RAV4’s standard safety package.

In terms of maintenance costs, these crossovers are a close match. In their fourth year of ownership, RAV4 owners can expect to spend around $1,701 in maintenance. Meanwhile, Ford Escape owners can anticipate spending an estimated $1,872.

Let’s look back at what these SUVs bring to the table. They both prove to be solid family haulers. There’s not a significant difference in passenger room. However, more impressive safety scores give the 2019 Toyota RAV4 an edge.

The Toyota RAV4 comes standard with a more satisfying base engine. Toyota also designed the RAV4 with a more efficient powertrain. However, Ford’s more powerful turbocharged engine transforms the Escape into a true performance machine. This potent engine also increases the Escape’s towing capacity to a rewarding 3,500 pounds. The Escape handles especially well for a crossover SUV.

Although the Ford Escape doesn’t have any styling cues that stand out, it’s an attractive vehicle. Featuring blacked-out exterior trim and 19-inch black wheels, the Escape’s optional Sport Appearance Package looks sharp. In the eyes of many Toyota fans, this is the best-looking RAV4 model in history.

After considering the pros and cons of both SUVs, the 2019 Toyota RAV4 wins this head-to-head comparison. While the 2019 Ford Escape is a good small crossover, it’s a step behind the new RAV4. Not only does the RAV4 provide good fuel economy and excellent impact protection, but it also has a striking new look. World-class reliability further sets apart the new RAV4. Despite losing this comparison, the Ford Escape is more than deserving of a test drive.

Save Money on a 2019 Ford Escape:
Are you Shopping for a New Vehicle? Find the Best Deals with "Free - No Hassle" Prices Quotes.