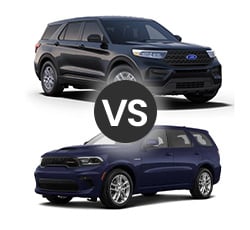 2021 Explorer vs Durango - How do they stack up? Which is Better?

Three-row SUVs have changed the way families drive. The explosion of popularity has led to a competitive market that offers many enticing options. Not all of these options are created equally, however, and different SUVs prioritize different things.

The 2021 Ford Explorer is praised for its comfort and driver aids. At the same time, the back rows are not as spacious as some rivals. This year, the SUV adds extra features to select trims. Highlights include heated front seats for the XLT model, along with an eight-way power-justable front passenger seat if buyers choose the Limited or higher. There is also a new Sport Appearance Package for the XLT trim that includes dual exhaust outlets, upgraded 20-inch wheels, and a special mesh grille.

Then there is the 2021 Dodge Durango. This SUV comes with only two rows standard on its base model. A third row is optional there, and standard on all higher trims. The Durango has impressive power and towing capabilities. In 2021, the midsize SUV gains a new style that included updated looks for the grille and headlights. There are also more technology features available, including a 10.1-inch touchscreen with UConnect 5.

Most critics will agree that both the 2021 Ford Explorer and 2021 Dodge Durango are good choices overall. That said, they have pretty significant differences that buyers should be aware of when making a choice between the two. Here is a detailed comparison to use for research.

The 2021 Explorer comes standard with a very respectable amount of power. Underneath the hood of most models is a turbocharged 2.3L four-cylinder that generates 300-horsepower and 310 lb-ft of torque. This SUV utilizes a 10-speed automatic transmission and comes standard with rear-wheel drive.

For the ST and Platinum models, Ford gives the Explorer a turbocharged 3.0L V6 engine that can pump out 400-horsepower and 415 lb-ft of torque. A 10-speed automatic remains standard. The ST model gets a sport-tuned suspension, while the Platinum trim comes standard with all-wheel drive.

There are many different Durango engines to be considered. The standard is a 3.6L V6 with the ability to make 295-horsepower and 265 lb-ft of torque. It works with an eight-speed automatic transmission. Like the Explorer, most Durango models come standard with rear-wheel drive.

With rear-wheel drive, the 2021 Explorer gets above-average fuel economy estimates from its base engine. The EPA says it will give you approximately 21mpg city and 28mpg highway. Models with the V6 do not do as well, getting 18mpg city and 26mpg highway.

When it comes to towing, the Explorer can bring along up to 5,600 pounds when properly equipped. This is a decent number, but nothing compared to what the Durango can do. The standard engine can tow up to 6,200 pounds. If buyers opt for the R/T trim level and add the Tow 'N Go package, they can handle up to 8,700 pounds. The SRT and SRT Hellcat can bring along that much as well. To put that in perspective, select Durango models tow more than all current compact pickup trucks and even beat some full-sized trucks out there.

J.D. Power evaluates new vehicles to determine their predicted reliability. For the Explorer in 2021, they gave it three out of five, which is average. The 2021 Durango got a more impressive score of four out of five.

Warranty coverages between these two SUVs are identical and typical of what buyers will find on most vehicles. Powertrain coverage lasts for five years or 60,000 miles. The limited bumper-to-bumper coverage runs for three years or 36,000 miles.

When it comes to smooth handling, the 2021 Ford Explorer has the edge. It does not feel like a large vehicle, and the steering responsiveness is excellent. This is not the case for the Durango, which does not offer a lot of feedback from the road. The R/T and SRT models are a bit better, thanks to their sporty modifications to the suspension.

The standard setup for the Explorer has seating for seven. Second-row captain's chairs are available if seating for six is all that is required. On the other hand, the Durango has seating for five standard. The third-row bench, which is standard on all but the base model, can be added to the SXT for a little extra money.

For the Explorer, the first row of seats is comfortable and spacious. The further back passengers move, however, the more cramped they will feel. The second and third rows could also use more padding. Durango passengers will be comfortable in the first and second rows. The third row is best saved for children, but this is fairly common in the midsize three-row SUV world.

Both the Explorer and Durango are impressive when it comes to technology in 2021. The Explorer comes standard with an 8-inch touchscreen, Android Auto, Apple CarPlay, a Wi-Fi hotspot, and four USB ports. Buyers will find similar things in the Durango, although the Dodge SUV has an 8.4-inch touchscreen and adds a 7-inch digital instrument display cluster. Both SUVs come with six speakers standard.

The infotainment systems for both the Explorer and Durango are easy to use. For the Durango, the upgraded touchscreen comes with UConnect 5, which Dodge claims is much faster than UConnect 4. The larger touchscreen also automatically gets wireless Android Auto and Apple CarPlay, as well as Amazon Alexa compatibility.

So far, the 2021 Explorer and 2021 Durango have both been appealing. It is when looking at safety features that the Explorer pulls ahead. It comes with blind-spot monitoring, pedestrian detection, forward automatic emergency braking, lane-keep assist, driver drowsiness monitoring, and rear cross-traffic alert on all models. All the Durango gives drivers standard is a rearview camera.

The Durango is available with many of the same features found on the Explorer. Both of these SUVs have adaptive cruise control on select models. The Explorer further offers reverse brake assist, an evasive steering assist, traffic sign recognition, and a surround-view parking system on higher trims.

So how do these features impact the safety ratings given to these SUVs? The National Highway Traffic Safety Administration did not give the 2021 Durango an overall score. They did give it five stars in side crash testing, however. Models with rear-wheel drive got four stars in rollover testing, while all-wheel-drive models received only three stars.

The 2021 Ford Explorer got a full evaluation from the NHTSA. Its overall score was five out of five. They gave the Explorer five stars for frontal and side crash testing, and four stars in rollover testing.

For its base model, the 2021 Ford Explorer will cost buyers around $33,000. If the top-of-the-line Platinum trim is the only model that will do, the Explorer costs approximately $59,000. The Dodge Durango can be had for less if buyers are willing to settle for its entry-level version. It starts out at $31,765. If a driver has their heart set on the SRT Hellcat, they have to be ready to spend at least $80,995. The typical SRT, which has plenty of raw power, costs around $62,995. This is more in line with the Explorer Platinum.

Once a new vehicle is purchased, the expenses obviously do not stop. So which of these two SUVs will cost more over a five-year span? Kelley Blue Book provides estimates to help buyers decide.

For the 2021 Ford Explorer, the out-of-pocket costs are estimated to be $21,465. This number includes fuel, insurance, maintenance, repairs, and more. In its first five years, the 2021 Explorer is also estimated to lose $18,920 in value. Together, this gives the SUV a five-year cost-to-own estimate of $40,385. Some buyers prefer to look at the estimated cost per mile, which is $0.54 for the Explorer.

The Explorer seems expensive until it is compared to the 2021 Durango. This SUV's estimated out-of-pocket expenses come in at $23,462. The fact that it is less fuel-efficient than the Explorer is part of the reason the Durango will cost so much more as the years go on. The Durango is also estimated to lose $19,959 in five years. The five-year cost-to-own is $43,421, or $0.58 per mile.

For most families, the 2021 Ford Explorer is going to be the better choice. It has a respectable amount of power, multiple standard driver aids, and lower projected costs. Its lack of space in the back rows is a bit of an issue, but the pros outweigh the cons here.

Those who absolutely need the power of a supercharged V8 and three rows of seating will prefer the Durango, but they will need to be ready to pay big time to get the top trim level. This vehicle does have the higher predicted reliability rating, along with a more spacious second-row and stronger towing numbers. Still, its complete lack of standard driver aids is surprising in 2021. Families who need a three-row midsize SUV will be better of with the Ford Explorer or perhaps looking at different vehicle options altogether.

Save Money on a 2021 Ford Explorer:
Are you Shopping for a New Vehicle? Find the Best Deals with "Free - No Hassle" Prices Quotes.