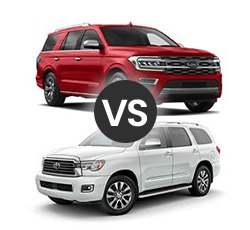 2022 Expedition vs Sequoia - How Do They Stack Up? Which is Better?

Large SUVs are not as popular as they once were. That is especially true of truck-based models like the Ford Expedition and the Toyota Sequoia. These are thirsty vehicles that are somewhat difficult to maneuver, making them a not-so-practical choice for life in certain areas.

That said, the 2022 Ford Expedition and the 2022 Toyota Sequoia have a lot of perks. They are incredibly spacious, and they offer higher towing numbers than other SUVs. Many of their advantages are similar, but the Expedition and Sequoia both have unique perks as well. The differences between the two large SUVs will be highlighted in this guide.

Toyota goes a different route when it comes to moving the 2022 Sequoia around town. All models get a 5.7L V8 that creates 381-horsepower and 401 lb-ft of torque. A six-speed automatic transmission is standard, and rear-wheel drive is standard for all models. Four-wheel drive is available on those models, and it comes standard on higher trims.

The exact fuel economy of the Ford Expedition depends on the version of the turbocharged V6 underneath the hood. At best, it gets 17mpg city and 23mpg highway. The thirstiest models get 15mpg city and 19mpg highway. These are good numbers for a large SUV, mostly due to the fact that Ford goes with a V6 rather than a V8.

The fuel economy is one of the biggest disadvantages of the 2022 Sequoia. No matter the drivetrain, this large SUV returns 13mpg city and 17mpg highway. The Sequoia is one of the least efficient vehicles in the class. When it comes to acceleration and passing power, both the Expedition and Sequoia deliver. The Expedition just manages to do it much more efficiently.

Predicted reliability is subjective, but J.D. Power does an impressive job of evaluating new vehicles for consumers. On a scale of 0-100, the 2022 Expedition received a score of 75. This is average. The 2022 Sequoia manages to get a score of 81, which puts it into the "Great" range.

Towing may be the priority for some shoppers. When properly equipped, the new Expedition can handle up to 9,300 pounds. That is an amazing number, even when compared to similar vehicles. The 2022 Sequoia, on the other hand, can only handle up to 7,400 pounds. This is a low number for the large SUV class.

Some drivers may be after off-road capability instead. The Expedition is not marketed as an off-roader, but it does have a good deal of ground clearance to offer. It is also available with four-wheel drive, helping it get further off the beaten path. The available Timberline model has extras like heavy-duty skid plates and a two-speed transfer case.

The 2022 Sequoia is also capable of some off-road adventuring. It has nearly 10-inches of ground clearance, and it is available in a TRD Pro trim level. This model has upgraded shocks and skid plates to help the Sequoia take the whole family off the beaten path.

All large SUVs, especially those built on a truck platform, can be difficult to drive. That is not the case with the 2022 Expedition, however. There is very little body roll, and the steering is nicely weighted. That does not mean that this vehicle is not a pain to park or maneuver around tight turns, however, simply due to its size.

There is no way around the fact that the 2022 Sequoia is difficult to drive. There is not much feedback from the road, leaving drivers feeling somewhat out of control. Body roll is an issue as well. On the plus side, the light steering does make it feel easier to get into smaller parking spots.

Moving onto the Sequoia, buyers will find 18.9 cubic feet behind the back row. The third row folds down flat, and there are 66.6 cubic feet to work with once this happens. The maximum cargo capacity is 120.1 cubic feet, which is impressive when compared to the standard Expedition.

Both the Expedition and Sequoia can seat up to seven or eight, depending on whether or not second-row captain's chairs are chosen. These SUVs both offer an impressive amount of space in all three rows. The Expedition is particularly roomy in the third row, making it one of the few vehicles that eight adults can comfortably ride in.

The standard infotainment screen for the Sequoia is 7-inches. At the same time, the Expedition comes equipped with a 12-inch touchscreen. Both of these SUVs have outdated graphics. A Wi-Fi hotspot is standard for them both. They also have Android Auto and Apple CarPlay, although the Expedition has the wireless versions while the Sequoia does not. The Sequoia does add Amazon Alexa compatibility, however.

There are three standard USB ports for the Sequoia, while the Expedition has four. The Sequoia has an eight-speaker sound system and HD radio. For the Expedition, a six-speaker sound system comes standard. Navigation is available for both. The Expedition can upgrade to a 15.5-inch touchscreen, a digital instrument cluster, and wireless device charging. Both SUVs offer rear-seat entertainment systems on their higher trim levels.

The National Highway Traffic Safety Administration evaluates new SUVs in several areas. Neither the 2022 Expedition nor the 2022 Sequoia has been fully tested. So far, the Expedition has gotten five stars in side crash testing. Rear-wheel-drive models get only three stars in rollover testing, while four-wheel-drive models get four stars. So far, the 2022 Sequoia has only had rollover testing conducted. It received four out of five stars, which is fairly typical for an SUV.

The Ford Expedition also comes with driver attention monitoring in 2022. It is further available with adaptive cruise control, front parking sensors, and a surround-view camera system. BlueCruise is also an option, which is Ford's new partially automated parking system. Parallel and perpendicular parking assist is available. Interestingly, there are no extra driver aids available for the 2022 Toyota Sequoia.

Does the top trim level of the Expedition have enough features to justify costing more than $12,000 more than the top Sequoia? The Sequoia Platinum is very nicely equipped, coming with heated front and second-row seats, a rear-seat entertainment system, and an adaptive air suspension. As for the Expedition Platinum, it has a 12.4-inch digital gauge cluster, massaging front seats, and a partially automated driving system.

Buyers can upgrade any model of the Sequoia to a four-wheel-drive for around $3,000. That is roughly what it will cost to upgrade the Expedition as well. Buyers can also get the extended-base Expedition Max for an extra $2,000.

It looks like buyers can get the Sequoia for less than they would pay for the Expedition, but what happens as the years go on? That is why buyers should take the projected cost-to-own estimates into consideration. To get an idea of which vehicle will ultimately be the better value, the following compares the entry-level versions of both SUVs. It covers the first five years of ownership with the assumption that the vehicle is being driven 15,000 miles per year.

A new Sequoia is estimated to lose $20,121 over five years, which is around 40% of its total value. As for the Expedition, it will lose roughly $27,047, which is 47% of its value. For whatever reason, the Sequoia does not depreciate as quickly as the Expedition.

If buyers are set on a large SUV, either the 2022 Ford Expedition or the 2022 Toyota Sequoia will make a respectable choice. They both are quite large, giving them plenty of space for passengers and gear. Both SUVs are also versatile choices, making them good choices for busy families.

The 2022 Ford Expedition is fuel-efficient, at least for its class. It has an impressive number of standard features, including a beautiful 12-inch touchscreen. The Expedition has more advanced driver aids available, plus standard driver attention monitoring. It also has better handling than the Sequoia, plus a higher towing capacity.

There are also some advantages to the Sequoia. It has more cargo space than the standard Expedition, for example. The Sequoia also has a lower starting price, plus it maintains its value better over the years. J.D. Powers has also given the Sequoia a better predicted reliability score than the Expedition, which may sway buyers.

Buyers who are looking to spend a little less on their large SUV should see if the 2022 Toyota Sequoia will meet their needs. Otherwise, buyers should check out the well-rounded and more efficient 2022 Ford Explorer.