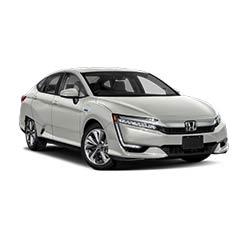 What 2021 Honda Clarity Hybrid Trim Level Should you Buy? What is the Difference Between Trims?

Since its debut for the 2017 model year, the Honda Clarity has been impressing buyers and car gurus alike with its fuel-savvy ways. The Fuel Cell was a hit for a hot minute but quickly fizzled and was discontinued for the 2020 model year. That all-electric vehicle was Honda's sole EV, and its 89-mile EV range just didn't seem to impress buyers. Despite its low lease rates and premium interior design, the Fuel Cell just did not jive with buyers. Meanwhile, the Chevy Bolt EV (with its impressive 238 Ev range) and the Tesla Model 3 (with 240 miles of EV) blew the competition out of the water. Also, the Fuel Cell was only offered in California and Oregon.

Wider offerings were given to the two other variants in the line-up, which remain for the 2021 model year: the Plug-in Hybrid (PHEV) and the Plug-in Hybrid Touring (PHEV Touring) trims. They are essentially the same vehicle with just a few more luxury items added to the Touring to give it that extra boost. Therefore, we will be discussing the foundations of the PHEV in quite some depth before we even begin to compare it to the line-topping Touring PHEV.

Let's first go over some things that buyers might like and dislike about the Clarity. First of all, the Clarity offers you one of Honda's extremely well-designed, comfortable, versatile cabins. There is space enough in both rows of seats, and even the sloping roofline manages to stay out of the way for both the driver (in terms of rear visibility) and the rear seat occupants (in terms of how much head space is available). Nobody will be wanting for leg space either, so taller adults can sit comfortably in the rear seat without having to ask the front seat occupants to slide up too far.

The other thing that buyers love about the Clarity is that its ride is virtually silent at all times. Hybrid powertrains are known to generate some noise, but this one is almost completely non-intrusive. And there is hardly anything that comes in, in terms of wind and road noise. Honda truly does know how to insulate its cabins.

The downsides? The touchscreen infotainment system is far from being an industry best. In fact, we think it is one of the more frustrating models for people to get accustomed to. The 8-inch touchscreen has an interface that just seems to bring the whole tech experience down. All of the touch points on the screen are too small, the graphics are wildly outdated, and the volume control slider is just downright difficult to use. You will have to struggle with this system if you get the Clarity, and it has a longer-than-usual learning curve.

So, which Clarity Hybrid model should you invest in? Should you invest in one at all? Let's go through both of its trim levels so that you can gain a bit more clarity (mind the pun). In the end, we will let you know which trim we think presents buyers with the best overall deal.

Time to kick things off, and we will start with discussing the details of the 2021 Honda Clarity's Plug-in Hybrid, which we will just refer to as the PHEV from here on out. These two trim levels are only about $3,200 apart in starting MSRP, so bear that in mind as we discuss the different features that come on the line-topping PHEV Touring trim level.

Both trim levels are powered by the same engine: a 1.5-L inline-4 cylinder gas-powered one. This gas engine comes paired up with a 17-kWh lithium-ion battery and an electric motor to create its hybrid capabilities. This powertrain generates a total power output of 212 hp and 232 lb-ft of torque. An electronic continuously variable transmission (eCVT) comes matched with it and features deceleration paddle selectors and Sport mode. The front suspension - which is a MacPherson strut design - comes standard, as does a multi-link rear suspension. The power assisted steering is rack-and-pinion style with electric. Also, both trim levels ride atop alloy-material 18-inch wheels that have a hybrid aerodynamic design and that come with Michelin Energy Saver all-season tires.

On the outside, these trim levels appear pretty similar with their ultimately divisive styling elements. These trims both feature aluminum material on the hood, the doors, the trunk, and on the fenders. There are windshield wipers with variable intermittent functionality, remote entry with the vehicle's built-in security system, turn indicators with a one touch function, taillights done in LED, and a deck-lid spoiler painted in your body color choice. In addition, the base PHEV also has a Walk Away Auto Lock mechanism that is integrated into the Smart Entry system that helps keep the vehicle locked and safe from theft. The side mirrors (which happen to be power adjustable for your convenience) are done in your choice of the body color, and there is a fin-style antenna mounted on top of the roof. There is auto on/off on the LED headlights and integrated turn indicators included. The Touring PHEV does not really add anything significant to the exterior to distinguish itself from the base PHEV.

What about the interior, you ask? Well, there are a few differences there, but not when it comes to the Honda Sensing bundle. This suite of standard driver aids comes equipped on both trim levels and will not leave you wanting for more. This bundle gives you access to handy features like the braking system that mitigates collision, a system for mitigating road departures, low-speed follow with the adaptive cruise control feature, a system for keeping you within your lane, a forward collision warning, and a lane departure warning. Honda Lane Watch also gets included as part of the PHEV's driver assist technology, and other safety features include a multi-angle rear-view camera, brake assist, LED daytime running lights, and a tire pressure monitoring system.

The Clarity comes with a lengthy enough list of audio and infotainment features, with only one real difference between the base and Touring trim levels. Both come with an 8-speaker, 180-watt sound system and an 8-inch high-resolution touchscreen display with the infotainment system. HondaLink comes standard, as does smartphone app integration via Apple CarPlay and Android Auto. SiriusXM Satellite Radio, HD Radio, Bluetooth HandsFreeLink, Bluetooth Streaming Audio, an SMS text messaging function, and a radio data system all come equipped too. Both trims give you one 1.0-amp USB audio port on the lower front console and one 1.5-amp USB smartphone/audio port on the lower front console. The one big upgrade here is that the PHEV Touring trim level comes equipped with a standard Honda Satellite Linked Navigation System with its built-in voice recognition system and Honda HD Digital Traffic feature. This is not available at all on the base Clarity PHEV.

Now, let's talk creature comforts since there is also one significant upgrade here as well. The similarities? Both trim levels have a dual-zone automatic climate control system for heating and cooling the cabin as needed. They also have a push button start function, the HomeLink remote system, an auto-dimming rear-view mirror, auto-up/down power mirrors, power window switches that are illuminated, power door locks with programmable automatically locking doors, cruise control, and a tilting and telescoping steering column. Add to that more features like steering wheel mounted controls that are all illuminated, a center console with a deep storage bin hidden beneath a well-padded arm-rest, illuminated vanity mirrors for both front sun visors, LED map lights, a sunglasses holder, front and rear 12-volt power outlets, front and rear beverage holders, and driver- and passenger-side seatback and smartphone pockets.

Sounds like a lot, but there is even more. The PHEV and Touring PHEV both get a remote fuel filler door release, an electronic remote trunk release, a defroster on the rear window, a light for the cargo area, floor mats for each seating position, spacious side door pockets, and a well-sized glove compartment. The only difference? The Touring PHEV gets upgraded to a leather-wrapped steering wheel.

The seats themselves do get some more luxury-oriented upgrades that we would expect to find on a Touring trim from Honda. Both the PHEV and PHEV Touring have seating for five, and the front seats have standard heating while the rear seats are 60/40-split folding with a center arm-rest. However, the Touring PHEV upgrades you to a driver's seat with 8-way power adjustability and 2-position memory functionality. The front passenger seat is upgraded to have 4-way power adjustability, and the upholstery gets switched up to chic perforated leather trim.

Now that you see the few alterations that exist between the 2021 Honda Clarity Hybrid PHEV and Touring PHEV, you can take your pick between these two trims. They obviously have a lot in common, and the line-up was slightly more diverse when the Fuel Cell was a part of the mix. However, the Fuel Cell just wasn't a seller that spoke to many people and had to be axed from the line-up.

With plenty of in-family competition from the Civic, Insight, CR-V, and Accord, the Clarity is struggling to stand out from her siblings. And, as much as we want the Honda e to come State-side, Honda has said time and again that it won't. That leaves us with the Clarity as one of the closest options we have to an all-electric option. We had the Fuel Cell for a hot minute, in just two states.

If you have your heart set on getting a plug-in hybrid sedan, the Clarity is a good option. We like its flexibility and smooth-running hybrid powertrain. Seriously, you might have to remind yourself it is running when sitting at an idle, it is that quiet! And at highway speeds, the cabin remains well muted from harsh road and wind noise. That isn't something you can get from just any hybrid vehicle.

We recommend sticking with the base PHEV though, as the Touring PHEV does far too little to justify the price jump. The base PHEV is extremely well equipped and has almost everything you could ask for (aside from a current-gen infotainment system). The Honda Sensing bundle packs a ton of desirable driver aids into one neat package, which is something most buyers should feel satisfied with. That, and those heated front seats. It is hard to complain about those.

Save Money on a 2021 Honda Clarity Hybrid:
Are you Shopping for a New Vehicle? Find the Best Deals with "Free - No Hassle" Prices Quotes.