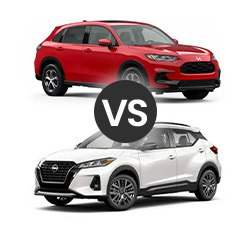 Subcompact SUVs have gained a lot of fans over the past several years. It's not a big surprise that they've become so popular, considering their versatility. They offer many advantages since they're efficient and can hold a decent amount of cargo. The Honda HR-V and Nissan Kicks are two solid competitors in this market. They have many similarities, so it makes sense why potential buyers would have to think carefully about which model would be better. This overview will review what each has to offer.

Both models are actually the same age, having been first released in 2016. They don't necessarily have the name recognition that their larger counterparts have, but they are intriguing options for some customers. Nissan makes three trims of the Kicks, which are the S, SV, and SR. The Honda HR-V comes in the LX, Sport, EX, and EX-L trims.

To be honest, neither one of these vehicles is going to be a buyer's first choice if performance is the most important factor. These models are a lot of things, but powerful isn't one of them. For most people, though, the HR-V and Kicks should be perfectly adequate.

Under the hood of the HR-V, there's a 1.8-liter, four-cylinder engine. It can make 141 horsepower and 127 pound-feet of torque. The Kicks uses a four-cylinder engine, too, but its engine has a displacement of 1.6 liters. With its slightly smaller size, it can generate 122 horsepower and 114 pound-feet of torque. The two SUVs use continuously variable transmissions, which are often seen in vehicles like this.

The Honda is the more athletic of the two models, and it has a big advantage because it's available with all-wheel drive. Honda's Real Time AWD system is available on every trim in the lineup. Anyone who may have to deal with wintry conditions should consider this option. The default configuration is to have front-wheel drive, and that's what the Nissan Kicks is limiting to having.

Also, the HR-V has a Sport mode that's part of its transmission system. Sport mode can be engaged to make things a bit more lively. The top three trims have paddle shifters that can be easily used whenever drivers want to have more control.

The HR-V and Kicks have standard Hill Start Assist, a program that holds pressure on the brakes. This prevents the vehicle from rolling backwards while the driver transitions from the brake pedal to the accelerator.

The first trim of the Kicks rides on 16-inch steel wheels, and the others have 17-inch aluminum-alloy wheels. In comparison, the HR-V can either have 17-inch or 18-inch alloy wheels. When it comes to wheels, many people feel that bigger means better, so this may be a point that some consumers will pay attention to.

The HR-V is the more responsive vehicle, and it can also offer a quieter ride. That's because three of its trims have Active Noise Cancellation. Active Noise Cancellation uses a complex system to keep things more peaceful in the cabin. It has microphones that can detect booming sounds coming from under the hood, and if those are detected, the system emits a signal that cancels out those sounds. It might be a little feature, but it can provide a more enjoyable experience.

In terms of physically driving these SUVs, there shouldn't be any problems with maneuvering since they're fairly agile. The Honda HR-V is 170.4 inches long, while the Nissan Kicks is 169.6 inches long. This actually makes them shorter than many compact sedans. The two models are about the same height and width as each other. Ground clearance on the Kicks is seven inches. An HR-V with all-wheel drive sits 6.7 inches off the ground, while one with front-wheel drive has a higher ground clearance of 7.3 inches.

The SUV-style body of these vehicles is what helps them attract attention. If they're so compact, though, do they have enough space in their cabins? Both can hold up to five passengers plus cargo, but it might be a tight squeeze for rear-seat passengers in the Kicks. The Nissan only has 33.5-inches of rear-seat leg room. In a significant contrast, the Honda has 39.3 inches of second-row leg room.

The front seat of the Kicks has plenty of space, with 43.7 inches of leg room. This is a few inches more than what the HR-V offers. Those who rarely have more than a few passengers riding in them probably won't mind the smaller back seat of the Kicks, but anyone with frequent riders in the second row will probably want to consider the HR-V over the Kicks.

It's important to note that the rear seats in the Kicks don't fold down completely flat, whereas the ones in the HR-V do fold totally flat. This may not seem like a big deal until someone has to load a heavy item into the back. Being able to slide it all the way into the vehicle can make this task much easier. With the Kicks, one would have to lift something up a few inches in order to push it in all the way.

Another feature is found in the Honda HR-V, and it's called a Magic Seat. The bottom of the “Magic Seat” can be flipped up so that it's positioned, vertically, against the seatback. This creates a taller area that's ideal for any item that needs to be upright rather than on its side.

Technology has become such a prominent part of modern vehicles. The Honda HR-V can come with a seven-inch touchscreen with Apple CarPlay and Android Auto, but this is only offered on the top three trims. The first trim has a five-inch color LCD screen and Bluetooth, along with one USB port and four speakers. The others all have two USB ports, with some having six speakers. These higher trims also have HondaLink and Pandora compatibility. The top two are further enhanced with SiriusXM and HD Radio.

Technology is an area in which the Nissan Kicks really shines. All of its trims have touchscreens, Apple CarPlay, and Android Auto; the first trim has a seven-inch one, and the others have eight-inch touchscreens. Like the HR-V, the Kicks comes standard with Bluetooth.

Another distinction that sets the Kicks apart is the amount of USB ports it has. It comes standard with three USB ports, and two of its trims have four total ports. The base package offers six speakers, with a Bose eight-speaker system being available on the highest trim. That trim can be upgraded with Wi-Fi connectivity and NissanConnect Services, too. SiriusXM and a seven-inch digital information display are found on the SV and SR trims, but not on the entry-level S.

The Kicks also separates itself from the HR-V in the area of safety. That's because it comes standard with driver-assist technologies. Every one of its trims has several advanced mechanisms that can play an active role in protecting passengers. In contrast, only the top half of the HR-V has driver-assist systems.

When the Kicks is approaching other vehicles or pedestrians too quickly, it can alert the driver. If it seems like pressure to the brakes needs to be applied immediately, then the vehicle can take care of that. Further, the Kicks comes standard with lane departure warning, blind spot warning, and rear cross-traffic alert. It even has rear automatic braking to prevent people from backing up into other objects. Automatic high beams and a rear sonar system are standard as well.

The first two trims of the HR-V don't have any of the features just mentioned. They do have anti-lock brakes, tire pressure monitoring systems, and a rearview camera. Only the top two trims have adaptive cruise control, automatic emergency braking, and lane departure warning. Instead of just being able to warn drivers when they're veering out of their lanes, they can correct steering in certain situations. These trims have automatic high beams, and they have Honda LaneWatch, a program that shows a live view of the vehicle's blind spot when the right-turn signal has been activated. It's nice to actually be able to see a vehicle in a blind spot rather than just being warned about it.

The HR-V, on the other hand, starts off with a cost of $21,870. Remember that this trim does not have driver-assist technologies, nor does it have a touchscreen with smartphone compatibility. The Sport and EX cost $23,820 and $25,070, respectively, and the EX-L tops off the list with a price of $26,670.

How do the top trims compare in terms of luxury? Well, the Honda's EX-L gets to have leather upholstery and heated front seats. It has a convenient auto-dimming mirror and automatic climate control, and the leather-wrapped steering wheel is a nice touch.

The SR trim of the Kicks only has sport cloth upholstery, with leather being optional. Heated front seats are optional instead of being standard, but a leather-wrapped steering wheel is standard. That steering wheel could even have a heating element built into it, for an additional cost. The SR has automatic climate control, but it doesn't have an auto-dimming rearview mirror.

There are clear ways in which these models have advantages over the other. The HR-V is more powerful than the Kicks is, and it has available all-wheel drive. The Honda has much more rear-seat leg room, in addition to having the more versatile and spacious cabin. For some buyers, these are going to be very important factors. Higher trims of the HR-V will keep people happy with advanced technology and comprehensive safety packages, but the lower trims just don't have as many of those impressive features.

The Kicks is the more affordable option, and it has better technology and safety offerings. It will appeal to those who don't necessarily have as many passengers or as much cargo to transport, and it should catch the eye of customers who don't want to pay that much money for a vehicle with advanced equipment.