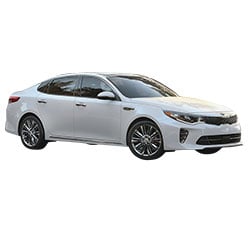 Should You Buy a 2017 Kia Optima? Here Are Some Reasons For and Against

Visit Car Clearance Deals, CarsDirect & MotorTrend.
Kia dealers have promoted the Optima sedan for over a decade, yet it remains unfamiliar to many drivers. Nonetheless, this midsize car frequently appeals to motorists who seek a spacious and stylish vehicle with sophisticated features. The 2017 Kia Optima offers numerous benefits as well as a few drawbacks.

Designers updated this car's interior and exterior for the 2016 model year, but they have made very few changes since then. However, the hybrid version of the Optima contains a new engine and different batteries. A 2.0-liter unit has replaced its 2.4-liter predecessor. The new battery pack holds more energy and weighs less.

Depending on the engine a driver selects, average fuel economy ranges from 25 to 32 mpg. The hybrid Kia Optima travels up to 46 miles before it fully burns a gallon of gasoline. This reliable sedan usually costs less to insure than a Toyota Corolla or Honda Civic.

In comparison to most other automakers, Kia guarantees new cars for more miles and years. It provides a powertrain warranty that expires after a decade or 100,000 miles. However, the manufacturer doesn't allow drivers to transfer all of the coverage to future owners. This company's anti-perforation and basic warranties remain in effect for five years.

The Kia Optima offers four trim levels and a wide variety of options. Buyers can add a high-end Harman/Kardon stereo, heated seats or a turbocharger. The available engines range from 178 to 245 horsepower. It's also possible to obtain sophisticated sensors that help drivers park and maneuver the Kia Optima.

Motorists appreciate this model's rapid acceleration, especially when it's equipped with a turbocharger. The 1.6-liter turbo engine takes slightly more than seven seconds to reach 60 mph. Tests also reveal that the Kia Optima stops sooner than most midsize cars. Keep in mind that results vary depending on the type of tire.

The 2017 Kia Optima seats up to five passengers and supplies more storage space than most competitors. This model has a back seat that splits and folds down. The trunk carries about 16 cubic feet of cargo, so drivers can easily stock up on groceries or take long camping trips. However, the hybrid version doesn't offer quite as much room.

Many motorists appreciate how well the Optima blocks outdoor noise. This makes it easy to communicate with passengers while driving on a highway or using studded tires. Kia significantly improved this aspect of the car in 2016. Some drivers gain even greater quietude by paying extra for laminated windows.

Many motorists and reviewers praise the 2017 Optima for its appealing exterior styling. Some people remark that it looks more like a coupe or sports car than a sedan. Although it seldom draws as much attention as a Mustang or Corvette, this model has a fairly distinctive appearance.

The 2017 Kia Optima comes with padded armrests and a leather steering wheel. This car's quiet cabin also makes it seem luxurious. Nevertheless, some commentators have criticized the materials that Kia uses for its LX interior trim. They include a substantial amount of plastic. Fortunately, drivers can pay extra for leather seats and other upgrades:

Although drivers can choose one of three engines, they don't have a six-cylinder option. Motorists who frequently traverse steep hills or carry heavy cargo may dislike this omission. Unlike some sedans from Subaru and Volvo, the 2017 Kia Optima can't tow any trailers. The optional turbocharger boosts performance on highways.

More Optima owners complain about steering than any other major problem. Although the sedan handles corners well, its steering wheel provides little feedback. Many drivers find the power steering system to be oversensitive. This makes it more difficult to confidently maneuver the car on roads with numerous twists and turns.

A few motorists complain about this vehicle's performance in snow. For the best results, drivers may need to temporarily deactivate traction control from time to time. Buyers don't have the option to add all-wheel drive to the 2017 Optima. This model also offers slightly less ground clearance than most competitors.

When drivers compare it to luxury cars, crossovers, and minivans, they find that the 2017 Optima consumes relatively little gasoline. Nevertheless, some sedans have surpassed its fuel efficiency. The Toyota Corolla, Nissan Altima, Volkswagen Jetta and Ford Focus travel more miles per gallon. This comparison only applies to the non-hybrid version.

Sizable windows make it easy to see in most directions, but rear visibility remains poor in the 2017 Kia Optima. Motorists can blame this problem on the car's headrests and its rear window design. Fortunately, a backup camera helps to mitigate the effects of this flaw. Drivers can maximize safety by remembering to clean the camera lens when it becomes dirty.

The bottom line is that this 2017 model offers reliability, safety and a desirable driving experience. Like any vehicle, it also has a few deficiencies. Motorists should look elsewhere if they want extremely high fuel economy or need to travel on snow-covered back roads. Nonetheless, most drivers can benefit from considering this sedan before buying a new car in 2017.