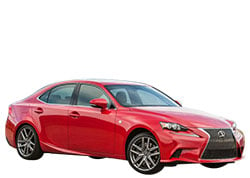 Should You Buy a 2016 Lexus IS? Here are the Pros and Cons

When the Lexus IS sedan was new in 2014, it carried over the base 2013 model powertrains. All else was new, even the updated equipment and features. In the initial two model years, what was offered in the Lexus were two V-6 engine alternatives, for the Lexus IS 250 sedan a 2.5-liter and for the IS 350a 3.5-liter. In both versions, automatic transmissions were available plus the optional AWD, with rear-drive coming standard.

The IS lineup for 2016 bids farewell to the IS 250 and ushers in two new IS models:
Minor updates include the standard 18-inch wheels that come with the 2016 Lexus IS 350.

Featured on the 2016 Lexus IS 200t is a rear-wheel drive plus a 2.0-liter four-cylinder turbocharged engine rated at 241 hp as well as torque at 258 pound-feet.

Exclusively on the new 2016 IS 350 RWD F Sport, you will get a variable-ratio steering system plus the power tilt-wheel and telescoping steering.

No matter the model you opt for, the 2016 Lexus IS will deliver satisfying power. Steeping on the pedal hard gives you satisfying and nice blast acceleration in no time.

Automotive journalists have liked the refined ride of the IS and note that it remains comfortable even when you are over rough road patches.

They have noted that:

Test drivers have given praise to the cabin of the 2016 Lexus IS for its upscale materials and handsome styling.

Inside the car, every IS dashboard feature feels nicely assembled even for the base entry level, and a very premium feel for those equipped with additional/optional upgrades.

The instrument panel of the Lexus IS has a resemblance close to the Lexus GS sedan, being of one family.

The 2016 Lexus IS comes with leatherette upholstery and seats 5. According to reviewers, the majority are going to find the sedan’s front seats supportive and comfortable.

The 2016 Lexus IS comes with trunk space measuring 13.8 cubic feet, which is above what you will get in the majority of cars in that class.

The new generation 2016 Lexus IS 350 has not yet been fully subjected to IIHS crash tests.

The 2016 IS’ well-tuned and precise steering enhances your confidence in all manner of situations, letting you have an enjoyable experience.

The 2016 Lexus IS has not had safety associated recalls from the NHTSA. As of now, there is insufficient data on vehicle reliability.

Perhaps the only real major foible with 2016 Lexus IS may be the navigation system’s mouse-like Remote Touch interface. Reviewers have noted that the cursor control is imprecise, especially when you are mobile.

The rear-wheel-drive IS 350 acceleration is technically somewhat below average when you consider that this is a small luxury sedan coming with a new and upgraded engine. Additionally, the sport-tuned suspension of the F Sport can at times seem overly firm.

According to auto critics, using the infotainment’s joystick controller as you move through the system’s menu is a drag as the selector tends to bounce all over the entire screen. Most reviewers think it is difficult to manipulate the mouse-like joystick for infotainment functions and navigation.

Automotive reviewers have compared the 2016 Lexus IS against the Mercedes-Benz C-Class and the 2015 Lexus RC.

If you are looking for a highly-styled compact and modern premium sports sedan, then you should think of the 2016 IS 350 as a worthwhile option in this popular car segment.
2016 Lexus Buying Guides:

Compare Local Dealer Prices
Find the Best Deal
Save Thousands on a 2016 Lexus IS! Start Your Own Online Price War