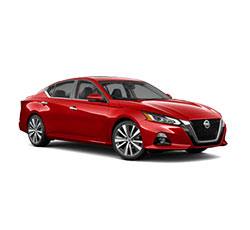 What 2021 Nissan Altima Trim Level Should you Buy? What is the Difference Between Trims?

The 2021 Nissan Altima is more than what it may seem. Yes, it's an affordable mid-size sedan. This makes it a practical choice for many consumers. Beyond having an ideal size and price point, it also has many available upgrades. The Altima can come with a turbocharged engine as well as all-wheel drive. The higher trims of the sedan feel athletic and upscale, while the lower trims offer great value and come with many standard amenities.

Compare the 2021 Nissan Altima S vs SV Trim Levels. What is the difference?

The S is the only trim that doesn't come with available all-wheel drive. As a front-wheel-drive car, it should satisfy a lot of people, but obviously it's not the most ideal for anyone who would run into snowy or icy conditions on a frequent basis.

Both the S and SV have 2.5-liter engines. These engines can generate 188 horsepower and 180 pound-feet of torque. This is plenty of capability for a car of this size. This Nissan uses an Xtronic continuously variable transmission, making things simple and straightforward in terms of the driving experience.

It's fortunate that the S and SV have numerous driver-assist technologies. The standard components include forward collision warning, automatic emergency braking, pedestrian detection, and lane departure warning. This means that the car knows when many types of situations may become problematic. If the Altima is approaching another car or pedestrian too quickly, or if it starts to drift out of its lane, then the driver will be given a warning. The automatic emergency braking can be particularly useful in avoiding accidents and keeping people safe.

On the SV, there is the addition of blind spot and rear cross-traffic monitoring. This provides helpful information in situations in which drivers can't see all around them. Plus, the SV has rear automatic braking, just in case a driver can't hit the brakes in time to avoid an accident.

On the outside of the S, there are 16-inch steel wheels. Truthfully, these seem pretty basic. In contrast, the SV has 17-inch wheels that are made with aluminum-alloy. The SV also has LED projector headlights instead of halogen projector headlights, and it has LED Daytime Running Lights.

The cabin of the S has some nice elements, such as a power-adjustable driver's seat and a 60/40 split rear seatback. Lowering this seatback can create a lot more room for cargo. The S, like the SV, has cloth seats. One difference between the two models is that the S has a carbon-fiber interior color scheme while the SV has elements that are piano black.

Most of the amenities are the same in the S and SV. For instance, they both have a Nissan Intelligent Key and remote engine start. However, the SV has a seven-inch advanced drive-assist display to help the driver stay aware of things. The S only has a five-inch display.

A major upgrade in the SV is the eight-inch touchscreen, which comes with Apple CarPlay, Android Auto, and SiriusXM Satellite Radio. For some, this is enough of a benefit to push them towards the SV. Keep in mind, though, that the S does have Bluetooth, voice recognition, and a USB port. The S's seven-inch touchscreen is simple to use.

Compare the 2021 Nissan Altima SV vs SR Trims. What is the difference?

Moving from the SV to the SR comes with a few key upgrades. First, the wheels are bumped up to 19-inch versions. Exterior features on the SR include a dark chrome V-Motion grille, black exterior mirrors, dual chrome exhaust finishers, and a charcoal-colored rear diffuser. These can all enhance the bold nature of the SR.

The SR is a sporty model that handles itself well and offers some extra excitement. It comes with paddle shifters so that people can manually shift gears. While it's not necessary or required to use these paddle shifters at all, it can certainly be fun to do so on occasion. Going along with this, the SR has sport-tuned suspension so it can handle better when taking turns, accelerating, and driving in several other situations.

The SR's cabin features a steering wheel and shift knob that are wrapped in leather. The seats are enhanced with a material called "sport cloth." Some may not notice the difference between it and regular cloth, but it does contribute to the athletic feel of this trim.

Compare the 2021 Nissan Altima SR vs SR VC-Turbo. What is the difference?

As the name of the next Altima trim would suggest, the SR VC-Turbo is powered by a turbocharged engine. It's a two-liter engine, and like the standard one, it has four cylinders. This engine can output nearly 250 horsepower and almost 275 pound-feet of torque. This is quite impressive, and it's going to make a lot of people happy. Anyone who truly enjoys hitting the gas pedal everyday will be intrigued by the opportunity to get such a fast and powerful sedan.

The downside of having the more advanced engine is that it's associated with lower fuel efficiency. With the turbo engine, the Altima can achieve up to 34 miles per gallon on the highway and 25 miles per gallon in the city. In comparison, the SR can earn up to 37/27 (highway/city) miles per gallon. (Note that the S does even better in this department because of its slightly different design.)

Like the SR, the SR VC-Turbo has the sport-tuned suspension. This is a key way in which they are distinct from the rest of the trims. In general, this type of suspension is firmer than a traditional one. It can reduce body roll and make things feel more responsive. The overall experience of driving is sharper, and people can feel more connected with the road.

Most of the other features remain unchanged when moving from the SR to the SR VC-Turbo, but there are a few differences. One notable upgrade in the VC-Turbo model is that it has heated front seats. These are becoming more commonplace in the industry, so some people might be expecting their next vehicles to have these types of seats. Also, the VC-Turbo has power lumbar support built into the driver's seat.

Something that's immediately noticeable when sitting inside the cabin is that the SR VC-Turbo has a moonroof. Since it's power-operated, it's easy to open or close. This moonroof is only option on the SR. Likewise, heated outside mirrors with LED turn signals are standard on the SR VC-Turbo and available on the SR.

Compare the 2021 Nissan Altima SR VC-Turbo vs SL Trim Level. What is the difference?

The SL is actually cheaper than the SR VC-Turbo. It comes in at just under $30,000, while the other trim is priced right above that threshold. This is interesting, especially since the SL goes back to having the 2.5-liter engine with 188 horsepower. As alluded to earlier, this engine is totally sufficient if not as exciting as the other version.

In the SL, the wheels measure 17 inches. The dual chrome exhaust finishers carry over from the SR VC-Turbo, but the side mirrors revert back to being body-colored instead of black. Chrome on the SL's door handles is a nice touch, and it matches the front grille. The SL is enhanced with LED fog lights, too.

In general, the SL feels more luxurious than the lower trims. It has leather seats and a heated steering wheel. The wood-tone interior trim is classy, and it's convenient that the front passenger's seat is power-adjustable. If multiple people are riding in the Altima, passengers will appreciate that the SL has a dual-zone temperature control system and rear air vents. To speed up the process of making the cabin a comfortable temperature, the SL's remote engine start system has an Intelligent Climate Control function.

Technology plays a bigger role in the SL than in the SR VC-Turbo, starting with the safety package. The SL has all of the previously mentioned driver-assist systems and a few more. It can recognize traffic signs and communicate that information to the driver in case he/she didn't see a sign. It also has Intelligent Lane Intervention. The car can warn drivers when they're veering to one side, and it can gently correct the steering as appropriate.

One major benefit of getting the SL is that it has integrated navigation. Nissan's navigation system comes along with SiriusXM Traffic and Travel Link so that people can stay updated regarding traffic conditions. NissanConnect Services gives the Altima the ability to act as a Wi-Fi hotspot, and it gives a driver instant access to all kinds of resources. Music lovers will be happy to hear that the SL has a Bose premium sound system.

Compare the 2021 Nissan Altima SL vs Platinum Trims. What is the difference?

Like the SL, the Platinum has the same standard engine. The Platinum the only trim that's exclusively made with all-wheel drive. Nissan uses an Intelligent All-Wheel Drive system, and it can significantly improve traction when the roads are hard to grip due to ice or snow.

The Platinum has more safety features than any other Altima in the lineup. It has an all-around monitor that gives drivers a way to see what's around them. It's a huge improvement over the standard rearview monitor, which is helpful but somewhat limited in comparison to a system that can provide a 360-degree perspective.

On the Platinum, there are 19-inch wheels. Also, its rear-view mirror has a HomeLink Universal Transceiver. It can be used to open or close a garage door, and it may be able to communicate with certain residential security and lighting systems. Interior accent lighting contributes to the more elegant aesthetic of the Platinum.

Sometimes, multiple drivers will get behind the wheel of a car. When this occurs, it can take some time to get the driver's seat into an optimal position. To speed up this process, the Platinum has a memory system so that a driver has to touch one button in order for the seat to adjust itself. This memory system works for the positioning of the outside mirrors as well.

The first thing to think about with the 2021 Nissan Altima is whether one wants to have the turbocharged engine. It can make the car feel much more spirited, but as with anything, it comes at a price. It's likely that most people who are considering the Altima won't be that interested in paying extra for the turbocharged engine, but it was a smart move for Altima to provide the SR VC-Turbo as an option.

There are five other trims available. The S could feel a bit too basic for some consumers, as it doesn't have smartphone compatibility. The SV does has Apple CarPlay and Android Auto, but while the SV is comfortable, it doesn't have some of the higher-end features that are seen in the other trims.

The SL has several attractive amenities. People will be taken care of since the car has heated front seats, leather upholstery, and a heated steering wheel. Notably, the SL has built-in navigation. All of these components work together to create a very respectable package. The SL doesn't have the extra technology that the Platinum has, but it's not really needed, and going with the SL instead of the top-level trim can save people a few thousand dollars.