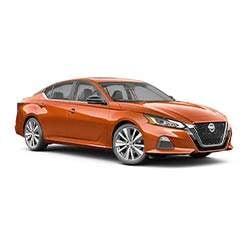 Price Tip:
To find the best possible price on a new Nissan Altima, shop prices online first. Get up front pricing before you walk into a dealership. We recommend the following free services; Car Clearance Deals,   Edmunds,   NADAguides,   Motortrend  &   CarsDirect
These services will offer you the lowest prices and supply you with multiple competing price quotes. You will know the best price before you visit the dealer.

How to Calculate The Dealer Cost of a Nissan Altima

The Nissan Altima is a great option for anyone looking for a stylish mid-size sedan that has advanced technology and numerous driver-assist systems. This car's affordable price has helped it be successful over the past several years.

For 2022, there's a new trim called the Midnight Edition. It has a dark color scheme and adds on what the SR trim offers. Another minor adjustment is that the Premium package that's available on the SV trim now comes with heated side mirrors that have integrated LED turn signals.

There are a lot of sedans in the market, but not all of them offer what the Altima does. While it has a standard engine that's pretty average for the class, it can also be powered by powered by a much stronger turbo engine, and it's available with all-wheel drive.

The basic engine is a fairly sizable 2.5-liter engine that can make up to 188 horsepower and 180 pound-feet of torque. This engine is available with front-wheel or all-wheel drive. The available turbo engine has a displacement of two liters and can pump out up to 248 horsepower and 273 pound-feet of torque. It might be disappointing to some that this turbo engine can only be paired with front-wheel drive.

With these numbers, the Altima can compete with some hybrids. It's actually not too far behind them in this regard.

Nissan gives every Altima trim a large touchscreen along with voice recognition, Bluetooth, and an additional screen that shows vehicle information. The base trim, which is the S, has Siri Eyes Free technology but is otherwise limited. It doesn't have Apple CarPlay or Android Auto. All of the other trims do, though, and they have SiriusXM and four total USB ports. In contrast, the S only has one USB port.

On the higher Altima trims, there could be integrated navigation and SiriusXM Traffic and Travel Link. Further, they could have Bose premium sound systems that give them nine total speakers, which is a big improvement over the six-speaker configuration found on the lower trims.

Nissan has focused a lot of its attention on integrating driver-assist systems into its lineup. The Altima benefits from having several of these advanced systems, including automatic emergency braking, pedestrian detection, and forward collision warning. These can all help prevent drivers from accidentally hitting vehicles or people in front of them.

Other driver-assist technologies are useful, too. For instance, lane departure warning can alert people when they're accidentally drifting to one side, and high beam assist can ensure that the high beams will turn on and off depending on whether other lights have been detected. Plus, there's a driver alertness program that can remind people to focus on the roads if their eyes seem to be drifting elsewhere.

Mid-level trims have more components, including rear sonar that assists with parking, reverse automatic braking, and blind-spot and rear cross-traffic monitoring. Not only do they have lane departure warning, but they also have a lane intervention function that can gently correct steering. Additionally, select trims have ProPILOT Assist, which is a type of semi-autonomous driving program that can control steering and speed in certain situations.

There are quite a few trims to consider. The S features a seven-inch touchscreen and a five-inch digital instrument cluster as well as 16-inch steel wheels and a convenient smart key entry system. Keep in mind that the S is the only trim with the 2.5-liter engine that can't be configured with all-wheel drive.

With the SV, the touchscreen measures eight inches and comes with Apple CarPlay and Android Auto. The digital instrument cluster is seven inches, and some other upgrades are 17-inch aluminum-alloy wheels, more driver-assist technologies, and LED headlights.

The SR is designed to be more athletic, coming with 19-inch wheels and a sport-tuned suspension. It provides paddle shifters in case someone wants to take control of shifting. It also gets to feature a leather-wrapped steering wheel and shift knob. The SR Midnight Edition is a bit more sleek with its LED fog lights, black badging, and black exterior accents. It's only available in Super Black, Gun Metallic, and Pearl White TriCoat.

Anyone who wants to maximize power should be pleased with the SR VC-Turbo, which uses the turbocharged engine. It's much more aggressive than the others, and it has heated front seats and a power moonroof.

The SL is more refined, though the nicest trim, the Platinum, is even more upscale. They both have ProPILOT Assist in addition to remote engine start, leather seats, and heated steering wheels. The Platinum is upgraded further with an auto-dimming rearview mirror and a memory system for the driver's seat and side mirrors.

The Nissan Altima is practical and stylish, and it's great that it comes in so many trims. Customers should be able to find something that works for them.

Note: All Nissan Altima MSRP, invoice and dealer cost dollar figures above are subject to change without notice.