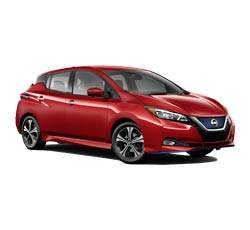 Nissan LEAF Pricing for the S, SV, S Plus, SV Plus and SL Plus Trims

Price Tip:
To find the best possible price on a new Nissan LEAF, shop prices online first. Get up front pricing before you walk into a dealership. We recommend the following free services; Car Clearance Deals,   Edmunds,   NADAguides,   Motortrend  &   CarsDirect
These services will offer you the lowest prices and supply you with multiple competing price quotes. You will know the best price before you visit the dealer.

How to Calculate The Dealer Cost of a Nissan LEAF

The LEAF is an all-electric hatchback that was one of the early pioneers in the field. It drives like a compact car but has extra cargo space since it has a taller cargo area, and this is one reason why it's appealing. As a bonus, it has pretty good range if one opts for the enhanced battery. Nissan has packed a lot of high-tech components into this model, making it feel modern.

There are a number of different charging mechanisms in the electric vehicle market. This year, Nissan has gone with the CHAdeMO quick charging system for the LEAF. Also, the SV Plus has gotten a semi-autonomous driving program called ProPILOT Assist.

Perhaps the most notable change for 2022 has to do with the the LEAF's cost. Its starting price has dropped by at least $4,200. Nothing has been taken away, other than that the top trims have a marginally lower range than they did previously. Therefore, this price decrease seems to be an aggressive move that will help the LEAF stand out in a market that's getting more crowded each year.

There are a few different trims of the Nissan LEAF, but more importantly, there are two versions when it comes to the electric motor and battery. The S and SV have 110 kW electric motors and 40 kWh batteries, and they have 147 horsepower and 236 pound-feet of torque.

The "Plus" designation on the S Plus, SV Plus, and SL Plus indicates that they have 62 kWh batteries and 160 kW electric motors. These components are stronger, giving the LEAF 214 horsepower and 250 pound-feet of torque.

Not only does the different system affect capability, but it also affects range. The S and SV have an estimated range of 149 miles, while the Plus trims can travel up to 226 miles before having to recharge.

There are three ways to charge the LEAF. First, it can be done at any regular outlet. This won't be fast, but it can add some additional range if needed.

There is one other method, and that's to use a 480-volt DC quick charging system, which can be found at many public charging stations. With this system, it takes 40 minutes to give the smaller battery an 80% charge. In about an hour with a 50 kW quick charge port, the larger battery can get to an 80% charge. If someone uses the 100 kW quick charge port on the LEAF instead, it could achieve this charge in about 45 minutes.

The LEAF may be preferred by some over electric sedans because of its hatchback design. Behind its rear seats, it has a dedicated cargo area that's relatively tall. It has a volume of 23.6 cubic feet. Lowering the rear seats expands total cargo capacity to 30 cubic feet. This isn't particularly huge, but it is more than what a sedan can offer in this department.

The trims were previously mentioned, but it's a good idea to go over them in greater detail. The lineup starts with the S and SV. They both have several driver-assist technologies, including blind-spot intervention, rear cross-traffic alert, and reverse automatic braking. These are in addition to the more standard driver-assist systems, like frontal collision warning and lane intervention, that are seen frequently on many entry-level trims.

Further, these trims have smart key entry and push-button start, as well as eight-inch touchscreens. Apple CarPlay, Android Auto, voice recognition, and SiriusXM are all standard, too, which is impressive.

The SV is enhanced with navigation and technology that allows the LEAF to monitor traffic and keep drivers updated on the most efficient routes to take. Instead of having four speakers like the S has, the SV has six speakers. Plus, it gets to have heated front seats, a heated steering wheel, and an adaptive cruise control system.

The S Plus is the first level at which the larger engine and more powerful motor become standard. This trim is basically the same as the regular S trim, with the exception of some small details. For example, its wheels are aluminum-alloy instead of steel.

With the SV Plus trim, there are some notable upgrades, including a power-adjustable driver's seat, LED headlights and LED daytime running lights. This trim has better technology in the form of an all-around camera, a driver alertness system, and an automatic-dimming rearview mirror.

The SL Plus is the nicest LEAF trim available. It features leather upholstery and a Bose speaker system, and its side mirrors have integrated turn signals.

The LEAF remains a good choice if anyone is looking forward to getting an all-electric hatchback. It really does have an impressive cabin in terms of its technology and practicality, and it's nice that there are several versions to consider.

Note: All Nissan LEAF MSRP, invoice and dealer cost dollar figures above are subject to change without notice.