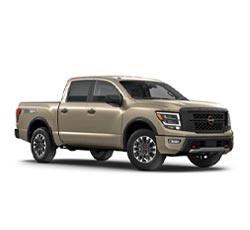 Price Tip:
To find the best possible price on a new Nissan Titan, shop prices online first. Get up front pricing before you walk into a dealership. We recommend the following free services; Car Clearance Deals,   Edmunds,   NADAguides,   Motortrend  &   CarsDirect
These services will offer you the lowest prices and supply you with multiple competing price quotes. You will know the best price before you visit the dealer.

How to Calculate The Dealer Cost of a Nissan Titan

The Nissan Titan is a powerful pickup truck that has a modern look and convenient features. Rugged and athletic, it's ready for hard work. Customers can choose from a variety of models, and this helps the Titan attract more attention.

There are two types of cabins that the Nissan Titan can have. One is a King Cab, while the other is a larger Crew Cab. The King Cab has a second row of seats, but it's tight back there. There's only 24.8 inches of rear-seat leg room, so it's not that ideal for those who plan on having a lot of passengers riding with them on a frequent basis. In contrast, the Crew Cab has 38.5 inches of leg room. This is quite a bit of space that's on par with what many SUVs have to offer.

The size of the cabin affects the length of the truck bed. The smaller cabin is paired with a longer bed that measures 78.7 inches. The bed length attached to a Crew Cab is 67 inches. This still provides a lot of cargo room, but just not as much as what the King Cab comes with. Customers will have to decide whether they need more interior or exterior space.

Nissan has decided to stick with one Titan engine, unlike some of its competitors that have given customers an array of choices. The Titan's engine is a 5.6-liter V8, and it can make 400 horsepower and 413 pound-feet of torque. With this amount of power, the truck feels strong and athletic.

The engine is paired with a nine-speed automatic transmission. Rear-wheel drive and all-wheel drive are both available. If an all-wheel-drive version is selected, there would be a switch-operated two-speed transfer case. One of the trims, the Pro-4X, comes standard with an electronic locking rear differential and off-road performance shocks. Every model has a multi-leaf rear suspension and an independent double-wishbone suspension in the front.

The truck can either have an eight- or nine-inch touchscreen. Either way, the touchscreen would be set up with Apple CarPlay, Android Auto, and Bluetooth. Voice recognition and a hands-free text messaging assistant are also standard; this can be considered a safety feature since it's so important for the driver to stay focused on the road. To keep people entertained, the Titan has SiriusXM Radio, and it can have an available Fender premium sound system.

Two USB ports are included with the truck. Some models have the addition of two extra USB ports for rear-seat passengers to use. The larger nine-inch touchscreen comes along with extra features. They include integrated navigation, SiriusXM Traffic and Travel Link, and Wi-Fi capability.

Behind the steering wheel, there's another screen for drivers to utilize. It measures seven inches, and it shows important vehicle information. Drivers can easily scroll through the menu to find the data they're looking for, such as remaining range or average fuel economy.

In regards to safety, the Nissan Titan is very well equipped. Every one of the trims has driver-assist technologies, such as lane departure warning, automatic emergency braking, blind spot monitoring, and rear automatic braking. Higher trims also come with the ability to read traffic signs, alert drivers when they're getting too close to objects when parking, and provide a 360-degree perspective of the vehicle's surroundings.

Customers can choose from four Titan trims. The S and SV are the first two in the lineup. They're both available with King Cabs or Crew Cabs. The top half of the lineup, which consists of the Pro-4X and Platinum Reserve, are only available as Crew Cabs.

The S has great technology and safety features, as already described. Its cabin has black inside door handles, along with cloth seats, remote keyless entry, and vinyl flooring. Honestly, in some ways, it feels kind of basic, but its powerful engine and advanced systems should win some customers over.

The SV has some key upgrades, such as heated side mirrors, carpeted flooring, and the nine-inch touchscreen with navigation. It can be enhanced with a leather-wrapped steering wheel and an auto-dimming rearview mirror.

If anyone wants a more athletic and durable model, there's the Pro-4X. It automatically comes with a 4x4 drivetrain. Hill descent control, skid plates, and all-terrain tires help it deal with tough conditions. Further, this trim looks more upscale with its LED signature headlights, interior LED lights, and the embroidered cloth seats with contrast stitching.

Lastly, there's the Platinum Reserve. Its the most sophisticated trim with running boards that have chrome accents, smart key entry, a power-adjustable steering column, and heated side mirrors with puddle lights and a reverse tilt-down feature. Some if its other amenities are heated and cooled front seats, heated rear seats, and premium leather upholstery.

Note: All Nissan Titan MSRP, invoice and dealer cost dollar figures above are subject to change without notice.