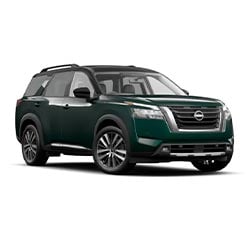 Price Tip:
To find the best possible price on a new Nissan Pathfinder, shop prices online first. Get up front pricing before you walk into a dealership. We recommend the following free services; Car Clearance Deals,   Edmunds,   NADAguides,   Motortrend  &   CarsDirect
These services will offer you the lowest prices and supply you with multiple competing price quotes. You will know the best price before you visit the dealer.

How to Calculate The Dealer Cost of a Nissan Pathfinder

The three-row Nissan Pathfinder has been around for awhile, but it took a brief hiatus in the 2021 model year. For 2022, it returns to the market with a bold new look. Nissan has equipped it with driver-assist technologies, an impressive infotainment system, convenient amenities, and comfortable seats.

Many things have been changed about the Pathfinder. While it retains the same engine, the company has swapped out the continuously variable automatic transmission with a nine-speed automatic.

Technology now plays a more major role in this Nissan SUV. It can have a head-up display and a 12.3-inch digital gauge cluster, and it can have a larger touchscreen that it did previously. In addition, more driver-assist systems are standard.

Perhaps the most noticeable difference about the new Pathfinder is that it looks a lot more rugged than it used to. It seems to be more boxy than it was previously, and its angled headlights and muscular features really stand out.

The 3.5-liter engine under the hood of the Nissan Pathfinder provides it with 284 horsepower and 259 pound-feet of torque. The SUV feels responsive, and people can drive it confidently even when it's weighed down with cargo and dealing with difficult conditions. This is especially true if the Nissan has four-wheel drive instead of two-wheel drive.

As mentioned, the Pathfinder uses a nine-speed automatic transmission. It has a manual mode in case anyone prefers having more control over shifting. Paddle shifters are located on the steering wheel. There are different driving modes that can be used to optimize performance in different situations.

Three-row SUVs are in high demand these days. Some of them can be hard to maneuver, but fortunately, the Pathfinder feels pretty agile.

It has plenty of space in the front row, so whoever gets to sit up front is in for a treat. In the second row, there is 35.5 inches of leg room, and in the third row, leg room is only 28 inches. Adults may be able to squeeze into the back in necessary, but it's likely that most people would use this as a space for children.

Some Pathfinder models have accommodations for eight people. In this case, they would have a bench seat in the middle row. Others are set up with a pair of captain's chairs, which would bring seating capacity down to seven.

Behind all of the seating, there's a dedicated cargo area. When the third row is upright, this area has a volume of 16.6 cubic feet. Lowering that third row increases cargo volume to 45 cubic feet. If no one needs to ride in the back and a large item has to be transported, all the rear seats can fold down. There would be over 80 cubic feet of cargo capacity in this scenario.

In many ways, the Pathfinder can feel very luxurious. It's available with a ten-way power-adjustable driver's seats with memory and lumbar support. It can have leather or semi-aniline leather upholstery on the seats, as well as heated and cooled front seats and heated seats in the middle row.

For extra warmth, the steering wheel can have a heating element, too. Passengers may have different preferences in terms of temperature, so it's great that the Pathfinder has tri-zone climate control.

Every model has smart key entry along with push button ignition. Many also have remote engine start so that the climate control system can start working before people get in. Little touches, like an auto-dimming rearview mirror, accent lighting, and a power-tilt and -telescoping steering column, add to the elegance of some trims.

Several things make it easier to keep the cabin organized. A standard feature is an under-floor storage compartment. Then, there are four tie-down hooks to keep items secured, and there are multiple pockets and cup holders in various places throughout the vehicle.

The Nissan Pathfinder can either have an eight- or nine-inch touchscreen. Navigation is standard on many trims, and voice recognition is included on all of them. Since Apple CarPlay and Android Auto are standard, it's simple to connect a smartphone with the vehicle's technology. Those who prefer maintaining fast connection to the internet should consider getting a Pathfinder with Wi-Fi hotspot capability.

Multiple USB ports are integrated into the cabin for convenience. The SUV has at least two USB-A ports and two additional USB-C ports. Some models could have a total of six USB ports as well as wireless charging.

Nissan definitely took advantage of technological advancements in putting together the Pathfinder's safety package. It includes forward collision warning, automatic emergency braking, blind spot monitoring, and more. It's so reassuring to know that the vehicle can look out for issues on its own. It can alert drivers to certain problems, and it can make adjustments to steering or braking if the situation calls for it.

The 2022 Nissan Pathfinder is quite stylish, and these good looks match its modern sensibility. Given its size and power, it's a good option for anyone interested in a three-row SUV. It has a reasonable price, so it shouldn't be too much of a stretch for some potential buyers.

Note: All Nissan Pathfinder MSRP, invoice and dealer cost dollar figures above are subject to change without notice.