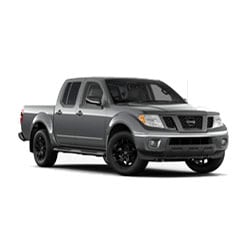 What 2021 Nissan Frontier Trim Level Should you Buy? What is the Difference Between Trims?

The 2021 Nissan Frontier is a capable mid-size truck that will appeal to many customers. It can handle itself well, even when the conditions are difficult, and it comes standard with some advanced technology. What will really stand out for many people is that it's reasonably priced.

Nissan makes several version of the Frontier. First, customers have to choose whether they'd like a King Cab or a Crew Cab. The King Cab is only available with the first two trims, while the Crew Cab is available on all four trims.

There's a pretty big distinction between these two cabin configurations. The King Cab has about 25 inches of leg room in its second row, while the Crew Cab has 33.6 inches of second-row leg room. If anyone is planning on transporting adults in the back seat, this is going to be very important.

Another important factor is the length of the truck bed. The King Cab comes standard with a truck bed that measure 73.3 inches long. In contrast, the Crew Cab comes with a bed that's 59.5 inches long. This makes sense since the two versions have the same wheelbase; people have to decide whether they'd like more space allocated to the truck be or cabin.

However, there is one trim that's different from the all the rest. It's the Crew Cab Long Bed SV. The long bed, which is 73.3 inches long, is exclusively available on this type of SV trim. It gives people the best of both worlds, and it increases the truck's overall length of 205.5 inches to 219.4 inches.

Before diving into the specifications regarding each trim, another thing to note is that every 2021 Nissan Frontier has the same powertrain. The truck runs on a fairly sizable V6 engine that has a displacement of 3.8 liters. With this engine, the truck has 310 horsepower and 281 pound-feet of torque. A 4x2 and 4x4 drivetrain are both available, and the engine is paired with a nine-speed automatic transmission.

The V6 engine gives the truck the ability to tow up to 6,620 pounds. If the truck bed is used to carry heavy loads, keep in mind that maximum payload is 1,460 pounds.

2021 Nissan Frontier S vs SV. What is the difference?

The S and SV ride on 16-inch wheels. The wheels on the S are steel, and those on the SV are aluminum-alloy, which is considered to be a higher quality material. Both trims have a chrome grille, though the SV has a body-color front bumper rather than a black one. In the back, its chrome rear bumper stands out. The dual power side mirrors and sliding rear window are convenient features to have, as are the SV's bed rail caps.

So far, many people would consider these to be minor differences. This is validated by the fact that the SV is only $900 more expensive than the S is. For that price difference, not much is to be expected. The S and SV have the same type of cloth upholstery and manually adjustable front seats. One higher end element is their leather-wrapped shift knobs. The SV, though, does have the option to get heated front seats and an automatic two-zone climate system.

Both Frontier trims have attractive safety and technology packages. Cruise control and a rearview monitor are standard, with the SV offering a rear sonar system as an add-on. It can be used to help with parking, providing an audible alert when the truck is getting too close to an object. Both trims have seven-inch touchscreens, Siri Eyes Free technology, Bluetooth, and six-speaker sound systems. People can use the controls mounted on the steering wheel, the touchscreen itself, or certain voice commands to make calls, change what's playing on the radio, and more.

Nissan has given the Frontier several convenient components. For example, the truck is automatically set up with remote keyless entry and push button start, regardless of what trim is selected. All trims have small storage compartments under their rear seats, and they have a seatback pocket behind the driver, an overhead console that's perfect for sunglasses, and numerous bottle and cup holders.

2021 Nissan Frontier SV vs Midnight Edition. What is the difference?

Overall, the Midnight Edition has a more aggressive look, thanks to its many dark features and bold details. The 18-inch wheels on the Midnight Edition are black, which really stands out. This trim has fog lights, splash guards, and a front tow hooks. These elements are obviously all functional, but even when they're not in use, they add to the aesthetic of this Frontier truck. Black painted mirrors, black step rails, black badging, and black side mirrors round out the dark color scheme and help this model make its presence known.

The Midnight Edition has a few extra exterior features that people will appreciate. Its sliding bed extender can come in handy with certain types of cargo, and its spray-on bedliner is very durable. The Utili-track channel system in the truck bed comes with four cleats that can be adjusted and used for securing equipment.

The cabin of the Midnight Edition is more refined than what's found in the lower trims. It's the level that starts to have heated front seats as a standard component. These can do a great job of keeping the driver and passenger more comfortable when the temperatures drop. The dual-zone climate control system that is available on the SV becomes standard on the Midnight Edition.

Plus, this trim has an auto-dimming rearview mirror. The mirror has a digital compass built into it as well as an outside temperature display. It's easy to glance up at the mirror to confirm the direction that someone is traveling in. The auto-dimming feature is quite useful at night. Many people understand how frustrating and distracting it can be to have super bright lights shining in that mirror. An auto-dimming mirror can make adjustments so those lights aren't as bothersome.

From a safety perspective, the Midnight Edition has a few more elements than the SV does. It has a rear sonar system that can alert the driver when he/she is getting too close to other objects while backing up. It also has hill start assist and hill descent control. Hill start assist holds pressure on the brakes when the driver moves his/her foot from the brake pedal to the gas pedal when stopped on a hill, and hill descent control can be used to keep speed at a reasonable level when traveling downhill.

2021 Nissan Frontier Midnight Edition vs PRO-4X. What is the difference?

At the PRO-4X level, there is no option to get a 4x2 drivetrain. Considering the name of this trim, this certainly makes sense.

The PRO-4X is designed to handle rugged terrain with ease. Nissan has given the PRO-4X 16-inch aluminum-alloy wheels along with all-terrain tires. It's the only trim to have an electronic locking rear differential and a Dana 44 rear axle. Further, it has Bilstein shock absorbers that can improve off-road performance. Like the other 4x4 versions of the Frontier, the PRO-4X has a two-speed transfer case that can be adjusted with the flip of a switch.

The PRO-4X has all the same safety features that are seen in the Midnight Edition. Unfortunately, driver-assist systems like automatic emergency braking and blind spot monitoring are not available on the 2021 version of this truck.

Other ways in which the PRO-4X looks different from the Midnight Edition are that it has skid plates and a roof rack with cross bars. Those skid plates can protect the oil pan and fuel tank from damage when driving over uneven terrain and/or loose rocks that may be kicked up by the tires. The satin chrome grille of the PRO-4X is more sophisticated than what the others have, and the PRO-4X is the only type of Frontier to have automatic headlights, heaters built into the side mirrors, and a power moonroof. That moonroof can be tilted or slid open to let in fresh air.

The cabin of the PRO-4X is much more upscale, thanks to leather seats and white contrast stitching. It has power-adjustable front seats, with the driver's seat being able to be adjusted in eight ways. The driver's seat has adjustable lumbar support, too. In the back seat of the PRO-4X, there's a center armrest that can be folded down. The leather-wrapped steering wheel, chrome vent accents, and chrome bezels on the instrument gauges are other small elements that contribute to the more luxurious nature of this trim.

People will likely be drawn to the PRO-4X because of its more advanced equipment. It comes standard with navigation and SiriusXM Traffic and Travel Link. This lets people quickly find directions to various destinations and/or avoid traffic congestion. They can look up directions by using the touchscreen or by using voice commands.

A CD player is included with the PRO-4X only, as is SiriusXM Satellite Radio. A Rockford Fosgate sound system enhances the audio quality in this top-level trim because it has ten speakers, one of which is a subwoofer.

The difference between the S and SV trims is very minimal, so if anyone needs to keep expenses down, he/she might as well get the SV trim. Its sliding rear window may be useful on occasion, and it has nicer wheels than the base model has.

On the other hand, if a potential customer wants a new truck that has more than just the basics, the other trims need to be considered. While the Midnight Edition has some very sleek elements to it, some people might not feel that its additional cost is justified. At the same time, the blackout appearance of the Midnight Edition won't necessarily appeal to everyone.

That leaves the PRO-4X. It's a great option for anyone who wants a truck that can handle the ups and downs of off-roading while also having high-end features. The PRO-4X can keep people happy with its moonroof, leather seats, and power-adjustable front seats.

Most notably, the PRO-4X has integrated navigation, SiriusXM, and a premium sound system. These three things can make a big impact. They can be enjoyed and utilized to their full extent on a daily basis. It can be so nice to have dozens of quality entertainment options when driving, whether on short or long trips, and having a navigation program that's always ready to assist can be very helpful. If someone interested in the 2021 Nissan Frontier has a budget that will allow for it, the PRO-4X would be the best trim to select.

Save Money on a 2021 Nissan Frontier:
Are you Shopping for a New Vehicle? Find the Best Deals with "Free - No Hassle" Prices Quotes.