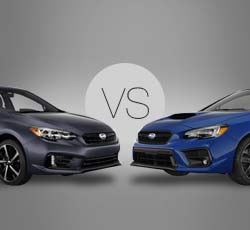 2020 Impreza vs WRX - How do they stack up? What are the differences?

Subaru has a history of making some of the best compact cars on the market. When shopping for a new ride, many people will be choosing between the 2020 Subaru Impreza and the 2020 Subaru WRX. While these two models are built on the same platform, they offer a completely different driving experience.

For years, the Subaru WRX has remained one of the most popular cars on the rally racing scene. It's specifically engineered to handle the rigors of the track. Many people are immediately drawn to the WRX's blistering performance and muscle-bound styling. Fortunately, drivers can still enjoy a comfortable morning commute in the new WRX.

Designed to compete against the likes of the Toyota Corolla and the Honda Civic, the 2020 Subaru Impreza is essentially a more practical version of the WRX. A standard AWD system gives it the edge over similarly priced cars. Here’s a closer look at how the Impreza compares to the WRX.

In terms of size, there’s virtually no difference between the 2020 Subaru Impreza and the 2020 Subaru WRX. They both offer the same amount of passenger room. Up to five people can fit inside. An adult-friendly backseat makes these compact cars great for families.

While the WRX is only available as a sedan, Subaru offers the Impreza in hatchback and sedan body styles. Drivers who need to haul extra gear will enjoy the Impreza hatchback. It provides 20.8 cubic feet of cargo space, which outclasses the sedan’s 12.3 cubic feet of trunk space.

When doing a side-by-side comparison of these models, there’s no overlooking their similar styling cues. However, the Subaru WRX has a noticeably more menacing presence. A performance-enhancing hood scoop and body kit give the WRX a serious intimidation factor. On the rear, quad exhaust finishers add to the WRX’s furious appearance. It looks ready to attack the track.

The high-output WRX STI has an even meaner attitude. It has a massive rear wing, which helps to stabilize the car at high speeds. Yellow brake calipers also help give the WRX STI an exotic look.

Keep mind that Subaru does offer a Subaru Impreza Sport trim. Although it doesn’t look as muscular as the WRX, it does have a sleek appearance. Subaru equips it with larger 18-inch aluminum wheels and a rear spoiler.

Like so many other Subaru vehicles, the Impreza and WRX offer good outward visibility. A low dash and hood enable drivers to enjoy a wide view of the road. When switching lanes, there are only a few blind spots from the rear.

Drivers who are simply looking for an economical car for daily commuting will like the Subaru Impreza. Its Boxer four-cylinder engine squeezes out a decent 152 horsepower. While many drivers will choose the Impreza’s automatic CVT transmission, the standard manual gearbox is better for performance. When accelerating from a stop, a manual-equipped Impreza takes around 8.6 seconds to hit 60 mph.

Folks who desire a true sports car will favor the WRX. It allows buyers to choose from two different engines. The standard WRX’s turbo four-cylinder engine cranks out 268 horsepower. This is enough muscle for you to dash to 60 mph in 5.6 seconds. Both a six-speed manual gearbox and an automatic CVT are offered. However, Subaru tunes the WRX’s CVT for performance as opposed to fuel savings.

For driving enthusiasts who seek maximum fun, Subaru offers the WRX STI. This version of the WRX features a turbo four-cylinder engine with 310 horsepower. Drivers can expect the WRX STI clock a 0-60 mph time in under 5.0 seconds.

The Subaru Impreza handles extremely well for a compact car. This is especially true for the Sport trim, which benefits from active torque vectoring. While the Impreza offers just enough driving fun for most car shoppers, expect the WRX to maneuver like a true sports car. Even the base WRX comes equipped with must-have performance upgrades, including a track-tuned suspension and stickier tires. An even more aggressive suspension is found on the WRX STI.

While the Subaru WRX clearly offers more performance, the Subaru Impreza is more practical. Its soft, quiet ride is perfect for daily commuting. Meanwhile, drivers can expect the performance-focused WRX’s ride to feel stiffer. Things can get a bit bumpy when traveling over rough pavement.

Aside from just a bit of wind noise at highway speeds, the Impreza is also relatively quiet on the inside. Because of the WRX’s high-performance design, it’s naturally a bit louder. Extra road noise is produced by the WRX’s performance tires.

Regardless of which one of these models a person chooses, they will benefit from Subaru’s full-time Symmetrical All-Wheel Drive system. It continuously feeds power to all four wheels, which promotes outstanding traction. This is one of the reasons why these cars are so popular in snow-prone states.

The 2020 Subaru Impreza delivers a solid braking performance. All-wheel drive aids its ability to stop quickly during emergencies. However, only the WRX can be equipped with beefier Brembo brakes. They are less likely to overheat on the track. Drivers who don’t need a capable track machine will be more than happy with the Impreza’s standard brakes.

When it comes to overall fuel economy, the Subaru Impreza is the hands-down winner. The federal government rates the Impreza to deliver up to 28 mpg town/ 36 mpg freeway. Furthermore, full power is developed using regular 87 octane.

Moving up to the more powerful WRX results in a loss of efficiency. When equipped with a manual gearbox, it can return up to 21 mpg town/27 mpg freeway. Opting for an automatic transmission further lowers economy to 18 mpg town/24 mpg freeway. Remember, all versions of the WRX are designed to run on premium gas.

The 2020 Subaru Impreza is high on comfort, especially for a car in its price class. Many drivers praise the Impreza for its supportive seats. Although ventilated seats aren’t offered, it doesn’t take long for the available heated seats to warm up on cold days. With the 2020 Subaru WRX being a performance model, Subaru designed it with a racier interior. While aluminum pedals and a flat-bottom steering wheel come standard, Recaro sport seats are offered as an option.

Drivers who’re trying to stick to a budget will like the Subaru Impreza’s affordability. It has a starting MSRP of less than $19,000. By comparison, Subaru lists the WRX with a starting price of more than $27,000. While the WRX is still a great bargain for a high-performance sports sedan, some car shoppers may still find it to be too big of an expense.

Neither car has a high reliability rating. Both received a 2.0 out of 5.0 rating in J.D Power’s dependability study. However, certain parts for the WRX are also more expensive to replace. Folks who want to avoid additional repair costs will favor the Subaru Impreza.

Although the WRX costs more than the Impreza, it’s not necessarily more luxurious. Both cars come equipped with Subaru’s easy-to-use Starlink infotainment unit, which features a standard 6.5-inch touchscreen. While the WRX comes standard with a six-speaker stereo, the Impreza receives a four-speaker stereo. Satellite radio is another one of the WRX’s exclusive standard features.

Many of the same options are available for these cars. While a Wi-Fi hotspot enables passengers to access the internet on their electronic devices, a Harman Kardon premium audio system brings a more entertaining sound. A larger 8.0-inch touch display with navigation is also available.

The 2020 Subaru Impreza has racked some impressive safety awards. It yet again scored a five-star rating in overall impact protection. A Top Safety Pick award from the IIHS also puts the Impreza among America’s most secure compact cars. WRX buyers will appreciate the fact that it was also named a Top Safety Pick. As expected, a reversing camera is standard throughout Subaru’s lineup.

Some valuable safety tech is available for these models. However, only the base Impreza can be equipped with Subaru’s EyeSight driving aids. Automatic versions of the base Impreza receive standard pre-collision braking, active lane control, and intelligent cruise control. To get these helpful safety features on the WRX, buyers must move up to a higher trim grade.

A person’s finances will ultimately play a role in their final decision. As discussed earlier, the 2020 Subaru Impreza is a lot more affordable. Not only is the Impreza cheaper to maintain, but it’s also significantly better on gas. While the 2020 Subaru WRX is the more expensive model, it still ranks among the best values in today’s sports sedan segment.

In regard to cargo space, an available hatchback body style gives the Impreza a leg up over the WRX. Students and adventure seekers will enjoy being able to pack more gear. When comparing the Impreza sedan and the WRX, shoppers will not notice any difference in passenger room.

Because of Subaru’s standard Symmetrical AWD system, traction is a non-issue for these cars. They are great for folks who need to stay on the go during the winter. When traveling on a snow-packed street, all-wheel drive gives the WRX a serious edge over a rear-wheel-drive sports sedan.

The Subaru Impreza’s 152-horsepower gets the job done. While acceleration is decent with the manual transmission, automatic versions of the Impreza feel a bit more sluggish. Although the Impreza isn’t as exhilarating to drive as the WRX, a smoother ride and better fuel economy make it a more practical choice.

Driving enthusiasts who desire a high level of performance will be disappointed with the Subaru Impreza. The WRX is a clear step ahead in the fun-to-drive department. Its punchy acceleration and surefooted handling could win over many people. Weekend warriors will especially enjoy taking the WRX STI model to the track. In many ways, the WRX is a high-octane variant of the Impreza.

When deciding which car to pick, it’s important for car shoppers to know what they desire the most. Although the Impreza is extremely practical, some drivers will ultimately want the WRX’s more exciting performance capabilities. Drivers who simply can’t afford the expense of a new WRX should consider the Impreza Sport. It receives a few upgrades for improved handling. A slightly more aggressive look also helps make the Impreza Sport a good alternative to the WRX.