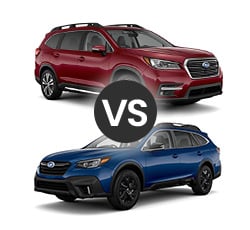 2021 Ascent vs Outback - How do they stack up? What are the differences?

Subaru is known for building reliable, high-quality vehicles that people can count on. With the Ascent and Outback, the company is giving the market two solid options for SUVs. In many ways, these models are very similar. They're both capable, durable, and safe. However, the Ascent has three rows of seats while the Outback only has two. There are other minor ways in which they differ as well, and this overview will go over this in detail.

They look nice, though there's nothing particularly unique about them. They can both have LED fog lights and chrome side mirrors, and LED steering responsive headlights are standard in the two models. The Ascent has slightly more refined exterior elements, as it can have chrome door handles and a panoramic glass moonroof. The Outback can have chrome inserts in its body-color door handles, and it can have a standard-sized moonroof.

Out of the two SUVs, the Ascent is the larger one. It has a length of 196.8 inches, compared with Outback's length of 191.3 inches. Also, the Ascent is three inches wider and about six inches taller than the Outback is. When parking, most people would be concerned about the length and width of a vehicle. While it is on the larger side, the Ascent should still be fairly easy to maneuver.

Both vehicles have a relatively high ground clearance of 8.7 inches. This can help them drive over various obstacles and bumps in the road without any issue. When it comes to wheel options, the Ascent has the nicer choices. It can either ride on 18- or 20-inch wheels. On the other hand, the Outback is limited to 17- or 18-inch wheels.

It makes sense that the Ascent has more interior room. Passengers in this SUV can enjoy a bit more head room and shoulder room than those in the Outback can. Leg room in the Ascent is 42.2, 38.6, and 31.7 in the first, second, and third rows, respectively. The Outback has a front-row leg room of 42.8 inches and a second-row leg room of 39.5 inches. Its passengers are a little better off than those in the Ascent are, at least in terms of the space they have to stretch their legs. Obviously, Subaru had to made some modifications in order to squeeze in a third row.

In the Ascent, eight passengers could ride together. The standard set-up would have a bench seat in the middle row and another bench in the third row. Each bench can fit three people across. Some of the higher trims have captain's chairs in their middle rows to create more interior space. This would bring total seating accommodations down to seven, but it would make it easier to access the third row. The traditional two-row configuration in the Outback allows for five people to sit together.

Given the additional size of the Ascent, it's a given that it's the model with more cargo space. When all of its rear seats have been folded down, it has 86.5 cubic feet of cargo capacity. Maximum cargo capacity in the Outback is generous, too, at 75.5 cubic feet.

Two engines are available with the Outback, while only one is offered with the Ascent. In the Ascent, there's a 2.4-liter turbocharged engine. It can make 260 horsepower and 277 pound-feet of torque, and it has a maximum towing capacity of 5,000 pounds.

That same engine can be found in the Outback, but only in the three XT trims at the top of the lineup. Note that even though they have the same engine as the Ascent, their towing capacity isn't as high. They can tow up to 3,500 pounds, which is still a respectable amount.

In each of the four other Outback trims, there's a 2.5-liter engine. It doesn't have the boost from a turbocharger. It's still pretty capable, though, as it has 182 horsepower and 176 pound-feet of torque. With this engine, the Outback can tow 2,700 pounds.

As expected from Subarus, the Ascent and Outback have symmetrical all-wheel drive. They also have X-MODE and Hill Descent Control. X-MODE can enhance performance when using the all-wheel-drive system, and it can come in handy when dealing with low friction surfaces. The Outback Onyx Edition XT has an X-MODE program that has a Deep Snow/Mud setting. Hill Descent Control can be used to limit speed when traveling downhill. This frees up the driver to simply focus on steering rather than having to deal with riding the brakes.

Both SUVs have the same type of braking and suspension systems. These are pretty standard. The Outback, though, does have something called Auto Vehicle Hold. It can hold pressure on the brakes after the vehicle has been stopped and before the driver is ready to move again. It's particularly helpful on inclines. In addition, both models have standard paddle shifters to give drivers the option of manually shifting whenever they'd like to.

One difference is in regards to the available upholstery. In the Outback, mid-level trims can have leather or StarTex seats, with the most premium models having Nappa leather seats. StarTex is a urethane, water-repellent upholstery that's easy to clean. In the Ascent, the first trim has cloth, the second trim has stain-resistant cloth, and the top two trims have leather. No Ascent trim has Nappa leather. The Ascent can have an Ivory leather trim on its dashboard and doors, and it can also have a woodgrain-patterned accent trim to enhance its sophistication level.

The available amenities in either of these models should please most customers. These vehicles can come with keyless access with push-button start and an auto-dimming rearview mirror, though these aren't standard across the lineups. A power rear gate that is height-programmable is standard in the Ascent. The Outback's higher trims have a hands-free power rear gate that has the height memory function, too. The Outback starts out with automatic climate control, but every trim except the base model has a dual-zone automatic climate control. In the Ascent, there's a tri-zone climate control system, and most trims have second-row climate controls.

STARLINK technology is used in Subaru's vehicles. The Ascent's base trim has a 6.5-inch touchscreen with Apple CarPlay, Android Auto, Bluetooth, HD Radio, and SiriusXM Satellite Radio. The other trims have eight-inch touchscreens. Optional on the mid-level trims and standard on the Touring are integrated navigation and a Harman Kardon Quantum Surround Sound audio system with 14 speakers. Wi-Fi capability is included with the three out of the four Ascent trims.

Comparable systems are found in the Outback. Its base model has a seven-inch touchscreen with smartphone compatibility, Bluetooth, HD Radio, and SiriusXM. The other trims have much larger 11.6-inch touchscreens. Three out of the seven trims come standard with built-in navigation, and this program is available on three others. The Harman Kardon sound system included with the more premium Outbacks has 12 speakers, and Wi-Fi capability is found on almost all of the Outbacks.

It's fortunate that Subaru has decided to equip the Ascent and Outback SUVs with many advanced safety components. As mentioned earlier, both vehicles have standard symmetrical all-wheel drive to keep them moving forward safely when the conditions are poor. They have automatic high beams to better light up dark roads, and they have rear-vision cameras to assist with driving in reverse. Available on both models is an 180-degree front-view monitor that may be useful when parking in a smaller space.

Subaru has given each model a full suite of driver-assist technologies. They're part of the package called EyeSight Driver Assist Technology. It has adaptive cruise control so that the vehicle can adjust its speed if the leading vehicle has changed its pace, pre-collision braking to prevent frontal collisions, and lane departure warning with lane keep assist, which can help the driver stay centered.

Higher trims have blind spot and rear cross-traffic alert. Along with this component, they could have reverse automatic braking. The Outback has one available element that the Ascent does not, and that's a DriverFocus Distraction Mitigation System. It can detect when a driver is not paying close attention to the road, and if so, it can issue an alert to get the driver re-focused on what's important.

These vehicles are quite comparable to each other in many ways. One way in which they aren't similar is in regards to price. With the Ascent, Subaru is asking consumers to pay extra for the larger cabin and the third row of seats. The Ascent's base trim costs $32,295, while the Outback's base trim only costs $26,795.

Modest price jumps are associated with the move to higher trims of each model. The Ascent Premium is priced at $34,795, the Limited costs $39,595, and the Touring is fairly expensive with a cost of $45,445. Remember that they all run on the same turbocharged engine, so the price increases are related to non-mechanical features.

With the Outback, the most expensive trim that has the standard engine is the Outback Touring, which costs $37,495. This is more expensive than two Subaru Ascent trims. The three Outback XT models have the same type of engine that the Ascent has, and they're priced at $35,145, $37,995, and $39,945. These numbers are in line with what the Ascent's trims cost, though they don't hit the high mark that has been sent by the Ascent Touring.

It's clear that the Ascent is going to be more appealing to people who need more passenger space. The Ascent is actually the only three-row SUV that Subaru makes. Some consumers know that they need the third row because they have more than five people to transport, while others might consider getting the Ascent for the occasional instances in which they can have people sitting in the third row.

The Outback makes more sense for people who don't need the additional seating. Since there are a range of Outbacks and two powertrain options, this vehicle is likely to have broad appeal. People on limited budgets can stick with the first or second trims, and those with more refined tastes or a need for more power can choose from the higher-end models.