2021 Subaru Ascent Pros vs Cons. Should You Buy? 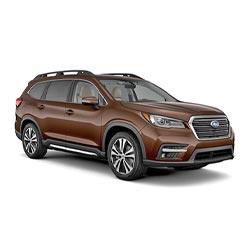 Should You Buy a 2021 Subaru Ascent? Here Are Some Reasons For and Against

The 2021 Subaru Ascent has a great combination of features. It has three rows of seating, good handling, advanced safety components, and modern technology. It's a relatively new addition to the market, as it became available to the public in 2018. In just a few years, it has proven why it's a popular choice amongst people who want practical, versatile, and reliable vehicles.

There haven't been any radical changes to the Subaru Ascent for the 2021 model year. What has been changed has been related to safety and aesthetics. First, the Touring model gets a new seat trim option, which is a sleek Slate Black that has silver stitching to help it stand out. Also, there are new adaptive LED headlights that can change their angle depending on what direction the SUV is facing. Automatic high beams and a seat belt reminder for the second- and third-row passengers are some other upgrades.

All four trims of the Subaru Ascent are powered by the same 2.4-liter engine. It's a turbocharged version with direct injection, and it can churn out 260 horsepower and 277 pound-feet of torque. This will provide people with enough power to get through a variety of challenges. Acceleration is smooth, thanks to the Lineartronic continuously variable transmission. For those people who are nostalgic for the feeling of driving a manual (or for drivers who sometimes want to change things up), Subaru has put in an eight-speed manual mode that can be used at any time.

3. Off the Beaten Path

For those times in which the conditions make driving more difficult, the 2021 Subaru Ascent has symmetrical all-wheel drive. This type of drivetrain sends power to all four wheels simultaneously in regular conditions, and it can continually make adjustments to how the power is delivered when the situation changes. With its balanced design of the engine and the drivetrain, the Ascent handles very well and is quite stable.

All trims of the Ascent also come with X-Mode. When X-Mode is engaged, the vehicle is even better prepared to take steep descents, climb hills, and traverse over slippery terrain. This is because it can use lower gear rations to create more power, make the traction control system better primed to take immediate action, and apply and adjust brake pressure as needed. On top of all of this, the Ascent has a ground clearance of 8.7 inches.

4. Room for Friends and Family

Of course, a main attraction of the Subaru Ascent is its size. It can fit eight or seven people, depending on whether one gets a bench seat or captain's chairs in the middle row. For some, having seating capacity over five is a must. With the Ascent, people can pile in and enjoy spending time together. Middle-row passengers will be comfortable, with there being 38.6 inches of leg room. Up front, there is 42.2 inches of leg room, and the third row has almost 32 inches of leg room.

If a bench is chosen for the second row, there would be two 60/40 split-benches in the vehicle. If captain's chairs are chosen, there can be some extra interior space in the center of the cabin. Some people prefer this configuration because it makes it easier for people to climb in and out of the third row.

There are multiple ways to change how the seating is arranged. The Ascent can carry skis and passengers at the same time just as well as it can carry furniture when all of the rear seats are lowered.

The Ascent starts out with cloth seats, but it's upgraded to stain-resistant cloth seats on the Ascent Premium trim. The top two trims feature leather upholstery to make them feel more sophisticated. All three of the higher trims have heated front seats to make wintry days and nights feel a little more cozy. The Limited and Touring have heated second-row seats, and the Touring has the addition of ventilation in the front seats.

7. Looking Out For People

With the 2021 Subaru Ascent, drivers will get a full suite of technologies that have been designed to protect them. EyeSight Driver Assist Technology consists of various sensors and warning systems that can alert people to potential issues. These issues may be related to potentially rear-ending another vehicle and veering out of a lane. There's also a standard adaptive cruise control system that can adjust speed according to the changing traffic patterns.

In addition, the Ascent comes with automatic high beams to make the road more visible when it's particularly dark out. Starting with the Premium trim, the Subaru has blind spot and rear cross traffic monitoring.

The Ascent comes standard with smartphone compatibility, Bluetooth, HD Radio, and SiriusXM Radio. On the base trim, there's a 6.5-inch touchscreen. All of the other versions of the Ascent have eight-inch touchscreens, and navigation is available. Plus, the top three trims have the ability to act as Wi-Fi hotspots. These features are sure to be appreciated by modern consumers who are used to doing so much with their phones and tablets.

Many people who drive the Ascent are always on the go, shuttling passengers and/or cargo around town. Subaru knows this, and it has built the Ascent with the busy customer in mind. Each trim of the Ascent has a power rear gate. It can open and close with the touch of a button, and its height can be adjusted so that there won't be any problems in garages with low clearance.

Appearances aren't everything, but they are very important. The Subaru Ascent has rugged good looks that are appealing to a wide range of buyers. It can come with either 18- or 20-inch wheels, and there are available LED fog lights. Other available exterior features include chrome door handles and satin chrome side mirrors.

Reasons Not to Buy a 2021 Subaru Ascent – The Cons

It's certainly a major advantage to have a third row of seats. It gives people flexibility and more freedom when it comes to carrying a lot of passengers. Keep in mind, though, that the third row of the Subaru Ascent is pretty cramped. There's only 31.7 inches of leg room back there, so most adults probably won't enjoy the ride if they have to stay in the third row for a long ride. Kids are a completely different story, and many will be delighted to hang out so far from the front of the vehicle.

2. No Other Engine Option

There are many vehicles out there that come with more than one powertrain option. Even Subaru itself makes models that have multiple engine options, which may include efficient hybrid systems. An unfortunate thing about the Subaru Ascent is that it only has one engine. People will be limited to the 260-horsepower engine even they have a preference for something more capable.

The Subaru Ascent won't be the vehicle to get if customers are trying to significantly cut their carbon footprints. The Ascent is estimated to have a fuel economy of 21/27 (city/highway) miles per gallon. Considering that there are plenty of hybrid SUVs that can earn approximately 40 miles per gallon, there is quite a bit of room for improvement in this department.

For the most part, Subaru isn't known for its flair. It's more of a brand that people can count on for practical purposes. While there are some exciting features on the higher trims of the Subaru Ascent, most components are nice but far from what anyone would consider unique or amazing.

The SUV market is a crowded one, and the popularity of three-row SUVs seems to be growing.

One of the things that jumps out with the Honda Pilot is that all-wheel drive is an add-on in contrast to being standard. Other elements that are standard on the Ascent but only available on the Pilot are a power tailgate, touchscreen, and smartphone compatibility. In other words, the base model of the Pilot lacks a lot of what the base Ascent has, and to many bargain shoppers, this is significant.

The small third row in the Ascent has been previously discussed, and if anyone was concerned about its size, there's even more reason to be concerned about the third row in the CX-9. Many people will have some trouble fitting in the back of the CX-9, so for this reason, the Mazda isn't as practical as the Ascent. Another major distinction between the Ascent and CX-9 is the seating arrangement. The CX-9 only has two seats in the back, giving it a seating capacity of six or seven, depending on whether captain's chairs are in the middle row.

The 2021 Subaru Ascent has a lot of attractive features. Price is a major selling point, as it starts at less than $33,000. At the other end of the spectrum, the Touring is reserved for those with the most premium tastes, as it costs a touch over $45,000. Still, in comparison with other models in the class, the Ascent has a competitive pricing structure.

Because the Ascent is so safe and durable, it's made a name for itself in the industry. The new Ascent feels modern in so many ways, as it has advanced connectivity, plentiful entertainment options, and driver-assist systems.


Save Money on a 2021 Subaru Ascent:
Are you Shopping for a New Vehicle? Find the Best Deals with "Free - No Hassle" Prices Quotes.