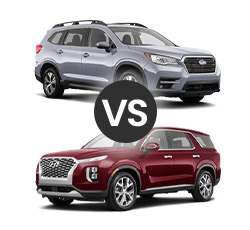 2022 Ascent vs Palisade - How Do They Stack Up? Which is Better?

The Ascent and Palisade are newer three-row SUVs that have already enjoyed a lot of success in their relatively short time in the market. For 2022, these vehicles are packed with high-tech equipment and powerful engines. They have many amenities that make them very attractive to a wide range of buyers. This guide will highlight how they might differ so that prospective customers can have an easier time of narrowing down their options.

Subaru and Hyundai have taken slightly different approaches to the powertrains of these vehicles. While the Ascent utilizes a turbocharged engine to give it more capability, the Palisade runs on a fairly large V6 engine. Another distinction between the two models is that the Ascent comes standard with all-wheel drive. As one would expect, the Palisade can come with all-wheel drive, but unfortunately, it's not a standard component. The default configuration is to have front-wheel drive.

Under the hood of the Subaru Ascent, there's a 2.4-liter turbocharged engine. It's able to generate 260 horsepower and 277 pound-feet of torque. The first trim out of the five trim options has a towing capacity of 2,000 pounds, and all the rest can tow up to 5,000 pounds. Subaru has paired the engine with a Lineartronic continuously variable transmission. A side note is that this type of transmission is found in almost all of its vehicles.

The V6 engine in the Palisade has a displacement of 3.8 liters. It can deliver 291 horsepower and 262 pound-feet of torque, so it's in the same general range as the Ascent. Hyundai has chosen to go with an eight-speed automatic transmission for the Palisade. This transmission has a manual mode in case someone wants to have more control over this aspect of driving. Like the Ascent, the Palisade comes with paddle shifters that have been mounted onto the steering wheel.

An all-wheel-drive version of the Palisade would be enhanced with a few extra systems. The first is Downhill Brake Control, which is also found on the Ascent. This program can be used to limit acceleration when traveling down hills and mountains. Another is Hillstart Assist Control. This feature can be used to hold pressure on the brakes after being stopped on a hill. That pressure is maintained until the driver presses on the gas pedal.

An all-wheel-drive Palisade also has Snow mode and a way to lock the vehicle into AWD mode. Standard drive modes that all Palisades have include Comfort, Eco, Sport, and Smart. Smart mode adapts to an individual's driving patterns and makes adjustments to shifting accordingly.

The Ascent doesn't have all of those driving modes, but it does have X-MODE. X-MODE can be engaged when the conditions prove to be very challenging. As necessary, it uses lower gear ratios to give extra power to certain wheels, and it can improve the responsiveness of the traction control system.

Out of the two models, the Ascent is the one that sits higher off the ground. Some people prefer having a high perch when they're behind the wheel. The Ascent's ground clearance is 8.7 inches, while the Palisade is situated 7.9 inches off the ground.

These models might be a bit larger than some people are used to, especially if they've been driving around sedans or two-row SUVs. From front to back, the Ascent measures 196.8 inches. This makes it about half an inch longer than the Palisade is. The Palisade, on the other hand, is slightly wider and taller than the Ascent is. The differences in both of these dimensions is about two or three inches.

How does this affect interior space? Well, given the similar sizes of the frames of these vehicles, it makes sense that they offer about the same amount of passenger space. People in the first two rows of the Palisade should be pleased with how much space they have. Leg room is 44.1 and 42.4 inches in the first- and second-rows, respectively. The third row only offers 31.4 inches of leg room, but it does accommodate three passengers.

In the Ascent, first-row leg room is comparable to what the Palisade offers. The Ascent's second row isn't as large, having 38.6 inches of leg room. This is perfectly fine; this just means that it doesn't feel over-sized like the Palisade's second row might seem. The third row of the Ascent can fit three people and has 31.7 inches of leg room. It does have a small advantage in size over the back seat of the Palisade, but the reality is that these rows are best left for smaller riders.

Cargo space is nearly identical in these two models. Behind their third rows, they have approximately 18 cubic feet of space. Lowering the back row can increase that volume to about 45 cubic feet, and folding down the two rows of rear seatbacks can maximize cargo capacity. This would result in having around 86 cubic feet of storage space.

One thing that can make the cabins of the Ascent and Palisade feel more spacious is a pair of captain's chairs. These chairs would replace the bench seat in the middle row. Yes, one seating position would be taken away, but the middle of the cabin would open up and people could spread out a bit more.

In the Palisade, a one-touch second-row seat slide makes it easier to push that seat forward. This gives third-row passengers more space as they get in and out of the vehicle. The third row of the Palisade can have a power-folding and -unfolding function, which can be convenient.

Most consumers these days want to find new vehicles that are equipped with technology that can make so many things easier. Thanks to standard Apple CarPlay and Android Auto, Ascent and Palisade drivers can play their favorite music, safely text other people, and make phone calls while keeping their hands on their steering wheels. Both vehicles have Bluetooth and large touchscreens.

The touchscreen in the base trim of the Ascent measures 6.5 inches. It comes with SiriusXM, and it's connected to a six-speaker sound system. The other trims have eight-inch touchscreens and Wi-Fi capability. Higher trims can be set up with integrated navigation and Harman Kardon sound systems that have 14 speakers.

The Palisade's first two trims have eight-inch touchscreens. Trims in the top half of the lineup gets to have 10.25-inch touchscreens with integrated navigation, and they have 12-speaker Harman Kardon audio systems. Hyundai has given these higher trims an in-cabin intercom system, in which a driver's voice can be broadcast through the rear speaker.

To keep mobile devices charged, it's always nice to have multiple USB ports that are accessible. The Palisade has more options than the Ascent does when it comes to this area. It's available with wireless charging, and it can have three USB ports in the first row along with a pair of USB ports in each of the second and third rows. The Ascent can have a total of six USB ports, two in each row. This is totally adequate, but it's not quite as impressive as what the Palisade offers.

The Palisade, though, has nicer features in terms of seating. Like the Ascent, it can have heated and ventilated front seats and heated rear seats. It takes it a step further, with available heated and ventilated rear seats and a memory system for the driver's seat and side mirrors. The driver's seat can even have a leg cushion extension for added comfort.

Plus, the Palisade can have a fully digitized instrument cluster. Its two higher trims can have 12.3-inch displays that show a variety of information, and this screen, right next to the 10.25-inch touchscreen in the center console, makes the Palisade feel really modern.

Customers can benefit from the amount of attention that the Subaru and Hyundai companies have placed on safety. The Ascent and Palisade are equipped with several advanced monitoring and mitigation systems. As a result, drivers can be more aware when they're behind the wheel, and some kinds of accidents are less likely to occur.

Both SUVs have automatic high beams to better light up dark roads. They have forward collision warning and can hit the brakes if it seems necessary to avoid hitting an object. They can alert drivers when they're veering out of position, and they come standard with adaptive cruise control.

The Palisade has a few extra systems, such as Driver Attention Warning and Safe Exit Assist. In addition, if a rear occupant has been left in the Palisade and it seems like the driver is about to leave, an alert would be issued.

More notably, the Palisade comes standard with blind-spot collision-avoidance assist and rear cross-traffic collision-avoidance assist. The Ascent can have blind-spot and rear cross-traffic alert, as well as reverse automatic braking, but these features are not found on every trim in the lineup. Finally, the Palisade can have a surround view monitor and a blind-spot view monitor, in addition to a heads-up display, so it does an excellent job of providing drivers with useful information.

The Hyundai Palisade starts out as the more expensive vehicle. Its entry-level trim, called the SE, has a cost of $33,600, and that's without the additional expense of all-wheel drive. The base trim of the Ascent costs about $32,800, and remember that the cost of a Subaru already takes all-wheel drive into account. However, since there are more standard safety features in the Palisade than the Ascent, many will feel that this higher price is justified.

At the other end of the lineup, there's the Palisade Calligraphy, which costs $47,290, and the Ascent Touring, coming in at $45,945. If the Palisade were to have all-wheel drive, this would increase the price to around $49,000.

For close to $50,000, a Hyundai customer would get to be treated to a dual-panel sunroof, premium Nappa leather seats, quilted leather door panels, and a heads-up display. This would be in addition to ambient lighting and heated and ventilated first- and second-row seats. The Touring trim of the Ascent is cheaper by a not-insignificant amount, but does it match up? It's set up with a panoramic moonroof and leather seats, as well as a leather accent trim on its doors, but it lacks ventilated rear seats and customizable ambient lighting. Also, its touchscreen is not as large as that of the Palisade Calligraphy.

Though they are similar in size and capability, the Ascent and Palisade will likely attract different types of buyers. The Palisade feels really modern and sleek, thanks to all of its high-tech components, so it should catch the eye of people with more refined tastes and higher expectations.

The Subaru Ascent seems like it's the more practical out of these two models. It's more budget-friendly than the Palisade is, and it comes with enough advanced technology to keep people satisfied. It lacks a bit of the luxury that the Palisade has, but it should serve its purpose just fine and can keep everyone safe and comfortable.