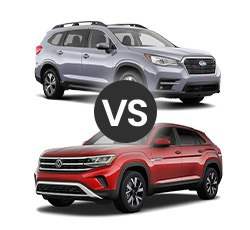 There are many reasons that drivers turn to midsize three-row SUVs for their day-to-day drives. They are spacious enough to be practical, but they are also typically more enjoyable to drive than full-size SUVs or minivans. Due to the popularity of this vehicle type, there are more options than ever out there.

The 2022 Subaru Ascent and the 2022 Volkswagen Atlas are both popular three-row SUVs. They both also happen to be the biggest offering from their respective brand. These vehicles are similar in size, but they are very different when looked at closer. To help buyers choose between these two potential purchases, the following guide highlights the differences.

Both of the available Atlas engines are mated to an eight-speed automatic transmission. The SE and SE with Technology trim levels come standard with front-wheel drive while giving buyers the option to upgrade. All other trim levels of the 2022 Atlas come exclusively with all-wheel drive.

Since there is only one setup for the new Ascent, buyers can expect 21mpg in the city and 27mpg on the highway from any model they choose. These are very respectable numbers for a midsize SUV with standard all-wheel drive.

The Subaru Ascent comes with the standard three years or 36,000 miles limited warranty and five years or 60,000 miles for the powertrain. Volkswagen has a somewhat unique warranty coverage period, on the other hand. The Atlas is covered for four years or 50,000 miles.

J.D. Power helps consumers out with a predicted reliability score for new vehicles. The 2022 Ascent does not have a score yet, but the very similar 2021 model got 80 out of 100. That would be considered average. The new Atlas received a score of only 70, which is also considered average, but just barely.

The final factor when comparing powertrain performance is towing capability. Those who choose the Ascent can tow up to 5,000 pounds when the SUV is properly equipped. Atlas models with the V6 and towing package can also handle 5,000 pounds. If the Atlas does not have the towing package, or if it has the four-cylinder engine, it can only handle 2,000 pounds.

Buyers should keep in mind that the Ascent comes standard with seating for eight. Many models go with second-row captain's chairs, which reduces that number to seven. The Atlas, on the other hand, has a maximum seating capacity of seven, with many models dropping down to six. Like most midsize SUVs, the Ascent and Atlas offer a nice amount of room in the first two rows while having slightly cramped third rows.

Both of these SUVs have a 6.5-inch touchscreen on their standard equipment list. Upper trim levels go up to 8-inch for the Ascent as well as the Atlas. Android Auto and Apple CarPlay are found in either SUV, plus Bluetooth. There are two USB ports located in the entry-level Atlas. The Ascent is a bit more family-friendly with its four standard USB ports, two of which are located in the second row.

A six-speaker sound system is standard for the Ascent as well as the Atlas, although the Subaru SUV comes with satellite radio on all models. This is optional for the Volkswagen SUV. It is not all bad news for the Atlas, however, which comes with a digital gauge cluster for a modern look inside the cabin.

The Atlas can be equipped with three additional USB ports, bringing the total to five. As for the Ascent, it can have two USB ports added to the third row, bringing the total up to six. The available stereo upgrade for the Ascent is a 14-speaker setup from Harman Kardon. A 12-speaker premium sound system is available for the 2022 Atlas. Either can be equipped with an integrated navigation system.

It can be argued that the Atlas goes further to keep people comfortable. This SUV comes standard with heated front seats and synthetic leather upholstery. There is also a power-adjustable driver's seat to enjoy. The Ascent has cloth upholstery and manually-adjustable front seats. On the other hand, the Ascent comes standard with tri-zone automatic climate control, which is missing on the entry-level Atlas.

When it comes to the most sophisticated versions of these two SUVs, buyers will find that they come with similar luxury features. They both have ventilated front seats, for example, and heated rear seats. Subaru gives the Ascent genuine leather on its top two trims, while the Atlas reserves this feature for only its top model.

When comparing safety between two vehicles, buyers should consider the standard equipment along with the test scores. Testing of the 2022 Ascent and 2022 Atlas was done by the National Highway Traffic Safety Administration. Both of the vehicles received an overall score of five out of five, which should be reassuring for consumers.

What the 2022 Ascent does come standard with, however, are driver favorites such as adaptive cruise control, lane-keeping assist, and automatic high beams. This SUV also has a rear-seat reminder, plus sophisticated steering-responsive LED headlights. Select models of the Ascent add blind-spot monitoring, reverse automatic emergency braking, rain-sensing windshield wipers, and a rear-vision mirror camera. A front-view camera is also an option.

The 2022 Atlas also has several available driver aids, depending on the trim level. Buyers can get front and rear parking sensors, a surround-vision camera system, and adaptive cruise control. Adaptive headlights with automatic high beams are also available. Unlike the Ascent, the Atlas offers a sophisticated hands-free park assist feature as well.

The entry-level model of the 2022 Ascent will start at around $33,470. Slightly more expensive is the entry-level 2022 Atlas, which starts at around $33,854. Both of these numbers are just slightly above average for the class. Savvy buyers know, however, that a vehicle's true cost depends on far more than just the initial price tag. That is why it is important to compare the five-year cost-to-own estimates for both vehicles.

In this case, the comparison is being made between the Ascent Base and the Atlas SE. It is assumed that both vehicles are driven around $15,000 miles for the sake of this comparison. Estimates are not yet out for the 2022 Atlas, but the numbers from the similar 2021 model will provide a useful comparison.

Which will be more expensive to drive on a day-to-day basis? The Ascent is considerably more fuel-efficient. That is why it is no surprise that it is estimated to cost $9,900 in gas, while the Atlas will cost $10,385. Keep in mind that the comparison is between an all-wheel-drive Ascent and a front-wheel-drive Atlas.

There is a lot to think about when comparing the 2022 Ascent to the 2022 Atlas. Both of them are considered well-made three-row midsize SUVs. They have different sets of strengths and weaknesses, however.

The 2022 Subaru Ascent comes standard with all-wheel drive. It is more efficient, and it has more horsepower than the standard engine for the Atlas. It also has a long list of driver assistance features, plus extra USB ports. The Ascent is also estimated to be more reliable than the Atlas. Throw in the fact that it is slightly less expensive, and a lot of families will be sold on the Ascent.

On the other hand, the 2022 Volkswagen Atlas has more cargo space. Unlike the Ascent, the Atlas also comes standard with blind-spot monitoring. Buyers may also like the standard digital instrument panel and the overall more modern look of the Atlas. The standard heated front seats, plus the power-adjustable driver's seat, makes the Atlas seem more upscale overall.

If having as much cargo space as possible is the priority, drivers should choose the 2022 Volkswagen Atlas. That said, most families will be happier with the 2022 Subaru Ascent.