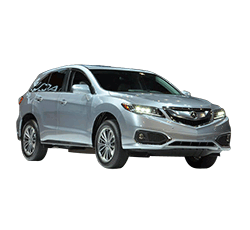 Should You Buy a 2016 Acura RDX? Here Are Some Reasons For and Against

Over the last few years, the crossover SUV segment has become very competitive. Despite the stiff competition, the Acura RDX still remains one of the best choices. Although the crossover SUV features a powerful engine, it still rewards the driver with good gas mileage. Due to the arrival of new safety features, the 2016 Acura RDX is an even more secure vehicle. During the winter time, drivers can rely on the SUV’s improved AWD system to provide the necessary traction.

Acura/Honda has a reputation for developing extremely reliability vehicles. The 2016 Acura RDX should continue that tradition. In the event that the crossover SUV does experience a mechanical problem, Acura’s 70,000-mile powertrain warranty will cover the repair costs. Drivers who are seeking long-term ownership should definitely consider the 2016 Acura RDX.

In terms of power, the 2016 Acura RDX is far from a weakling. The 3.5-liter, V-6 engine produces an exhilarating 279 horsepower and 252 pound-feet of torque. Based on last year’s performance numbers, the 2016 Acura RDX should accelerate to 60 mph in only six seconds. Drivers will love blasting past slow-moving traffic on the freeway. A six-speed automatic gearbox comes standard.

The SUV’s solid gas mileage is one of its best qualities. The RDX is rated at 20 mpg in the city and 29 mpg on the highway. The Acura RDX’s fuel efficiency actually surpasses some of the luxury sedans on today’s car market. When cruising on the open road, the RDX’s fuel management system can actually shut down three of the engine’s cylinders.

A front-wheel-drive system comes standard on the new RDX. However, prospective buyers can also upgrade to Acura’s improved AWD system. Due to the fact that more power is routed to the rear wheels, the AWD version will handle better than ever before. The RDX can tackle light snow with no difficulty. This is a key advantage for the drivers who live in cold climates.

The RDX’s spacious interior makes it a great family hauler. For the car shoppers who do not want a full-size SUV, the Acura RDX is a great mid-size option. Everyone will be able to ride in comfort. The new RDX also provides ample cargo space. Travelers should find the RDX to be a great long-distance touring vehicle.

The new Acura RDX has a noticeably more aggressive appearance. LED headlights give the SUV a show-stopping road presence. When equipped with the optional diamond-cut alloy wheels, the crossover SUV looks even more stunning. Muscular body lines help to accentuate the RDX’s sportiness. Some of the beautiful paint colors include Basque Red, Fathom Blue, and Crystal Black.

With a starting price of $35,270, the 2016 Acura RDX is a outstanding value. Although there are less expensive alternatives on the market, they simply cannot match the RDX’s outstanding craftsmanship. Even the base model comes standard with a multi-angle rear-view camera system and a power tailgate. The RDX can actually compete with SUV’s that cost more than $60,000.

Acura tweaked the suspension system to deliver an extremely smooth ride. Passengers will not have to worry about being bounced around on bumpy roads. Although the RDX is not a sports car, it still handles significantly better than most SUVs. A new electronic steering system alters its firmness according to the driving speed. The well-insulated cabin keeps road noise to a minimum.

Acura offers a lot of safety equipment for the new RDX. Conveniences such as the tire pressure monitoring system provide drivers with critical information. Some of the other standard safety features include a rear-view camera system and a sophisticated anti-lock braking system. Some of the optional safety enhancements include blind-spot monitoring, adaptive cruise control, and parking sensors.

There are several upgraded features available for the new RDX. Featuring a powerful subwoofer, the ELS audio system transforms the SUV into a party on wheels. Meanwhile, the rain-sensing wipers further enhance the SUV’s luxuriousness. Some of the other options include navigation, remote engine start, and a GPS-linked climate control system.

The Acura RDX does not offer an optional engine. The potent V-6 engine is the only available power source.

While the Acura RDX does offer an AWD system, a off-road package is not available. The crossover SUV is not designed to travel on extremely rugged terrain.

The Acura RDX is only rated to tow about 1,500 pounds. The SUV is most suitable for towing motorcycles and small boats.

Some of the competition includes the BMW X3, the Lexus NX 200t, and the Audi Q5. The Acura RDX is arguably the best all-around performer. While the Range Rover Evoque is a capable crossover SUV, it fails to match the reliability of the RDX.

In the world of crossover vehicles, the 2016 Acura RDX remains a solid choice. Its proven reliability and high-quality features will win over plenty of drivers. The powerful V-6 engine packs a punch while still delivering good gas mileage. Although the crossover SUV is not a rugged off-road machine, it does perform like a dream on the street.