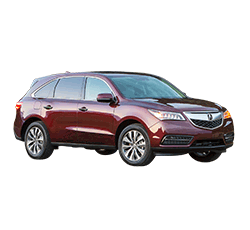 Should You Buy a 2016 Acura MDX? Here Are Some Reasons For and Against

The 2016 Acura MDX is a beautiful crossover SUV that excels in virtually every category. Although there are other options on the market, only a few can compete with the Acura MDX. Due to Acura’s proven record of reliability, buyers can expect the SUV to be extremely dependable. While the 2016 Acura MDX only offers one power source, it is one of the best-designed engines in the automotive world. Like the outgoing version, the new model will be available with several active safety features.

While the Acura MDX cannot match the handling of a pure sports sedan, it is far more athletic than the average SUV. Curvy back roads can be tackled with ease. Acura’s Integrated Dynamics System gives the MDX a remarkably sharp steering response. Despite the crossover SUV’s poised performance on the road, it still retains a plush ride quality.

The 2016 Acura MDX is recommended for the drivers who need to haul around their loved ones. Designed with three rows of seats, the crossover SUV provides plenty of room for families. While the third-row seat offers a tad less legroom, it is still very usable. When the rear seats are folded down, the MDX transforms into a capable hauling machine.

A potent 3.5-liter, V-6 engine comes standard in the new MDX. The popular engine is able to push out an imposing 290 horsepower and 267 pound-feet of torque. Over the last few years, this engine has developed a reputation for its durability. This is a key advantage for the drivers who are making a long-term investment.

Fitted with a nine-speed automatic transmission, the MDX keeps fuel consumption to a minimum. With a gas mileage rating of 27 mpg on the highway, the MDX is great alternative to a full-size SUV. If desired, buyers can also boost the SUV’s efficiency by opting for the automatic stop-start system.

With a towing capacity of 5,000 ponds, the Acura MDX is a very capable vehicle. From ATVs to campers, the crossover SUV can tow a variety of different things. After installing the required towing equipment, drivers will be able to quickly hook up a trailer. Due to its strong towing capacity, the MDX becomes an even more versatile vehicle.

Acura’s Super Handling All-Wheel Drive system is a major asset. While the front-wheel-drive models perform great in most weather conditions, the SH-AWD package gives the MDX all-weather capabilities. Drivers will be able to easily churn through deep snow during the winter. Not only does this innovative AWD system enhance traction, but it also improves the SUV’s cornering.

The 2016 Acura MDX showcased its excellent build quality at the governmental crash testing facility. Laced with a perfect five-star safety rating, the crossover SUV provides a high level security on the road. All models also come standard with a rear-view camera and a convenient tire pressure monitoring system. Available as an option, the Road Departure Mitigation system can actually detect objects on the side of the road.

Designed with Acura’s signature “Jewel Eye” headlights, the new MDX looks stunning even without the addition of a sporty body kit. The crossover’s refined character gives it a leg up on the competition. When equipped with the optional 19-inch wheels, the MDX has an even muscular appearance. Some of the available exterior colors include Fathom Blue, Dark Cherry, and Lunar Silver.

Acura made sure that every buyer will be treated to a luxurious driving experience. While the power lift-gate provides easy access to the cargo area, the eight-speaker audio system amps up the cabin’s mood. Some of the other standard items include a multi-angle backup camera, key-less ignition, a sunroof, and a seven-inch touch-screen display.

The base price for a new 2016 Acura MDX is around $44,000. While some buyers may opt for some of the expensive options, the base model may prove to be the best value. Most of the must-have features come standard. The overall fit and finish of the MDX rivals vehicles that are far more expensive.

1) Not an Extremely Rugged SUV

The Acura MDX is not the best option for off-road excursions. Drivers who plan to travel on extremely challenging terrains will have to shop for a more capable SUV.

2) There Are Cheaper Alternatives

While the MDX is one of the best values in its class, there are less expensive alternatives on the market. Some car shoppers simply do not demand a high degree of luxuriousness.

Very few buyers will complain about this crossover’s performance. However, some driving enthusiasts may desire a high-performance upgrade.

Some of the direct competition includes the BMW X5, the Volvo XC90, and the Audi Q7. While crossover SUVS such as the BMW X5 offer a more powerful engine, the Acura MDX shines due to its roomy interior. Although the Volvo XC90 has been creating a lot of buzz lately, it is still hard to overlook Acura’s longstanding history of producing reliable automobiles.

The 2016 Acura MDX does not have many shortcomings. In fact, it excels in the most important areas. The strong V-6 engine provides ample performance. When equipped with the Super Handling AWD system, the MDX is a fantastic performer in bad weather. Meanwhile, the crossover SUV’s outstanding crash protection pushes it to the top of the class.