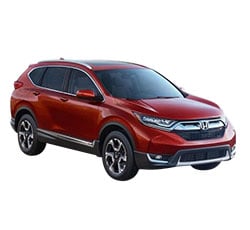 Should You Buy a 2017 Honda CR-V? Here Are Some Reasons For and Against

Over the years, the Honda CR-V has remained one of the most popular small SUVs on the market. Its dependability and excellent safety scores have helped keep it to stay on top. The all-new 2017 model benefits from several improvements, including a bigger interior and sharper styling. While all versions of the 2017 Honda CR-V offer a lot of value, the luxurious Touring model sits atop the lineup.

Honda chose to completely redesign the new CR-V. For the first time, the top-selling crossover can be equipped with a turbocharged engine.

Current and previous CR-V owners can attest to the SUV's bulletproof reliability. It is the type of vehicle that easily can last for more than 300,000 miles. Although the dependability of the new turbocharged engine has yet to be proven, Honda did spend a lot of time testing the engine’s durability. All trims are protected by a 60,000-mile powertrain warranty.

You can count on the base four-cylinder engine to withstand the test of time. Aside from the familiar engine’s sturdy design, it also delivers enough pep for most people. Honda tuned it to push out a competitive 184 horsepower and 180 pound-feet of torque. All versions of the 2017 Honda CR-V come equipped with a CVT automatic transmission.

Aside from the base LX model, all of the other CR-V models come equipped with a new turbocharged engine. Drivers will like its extra punch. It develops a fulfilling 190 horsepower and 179 pound-feet of torque. The turbocharged CR-V also gets better gas mileage. You can expect to get about 28 mpg in the city and up to 34 mpg on the highway.

The 2017 Honda HR-V provides an additional amount of ground clearance. When equipped with the optional AWD system, the crossover becomes an even better winter vehicle than before. The extra 1.5 inches of ground clearance helps drivers to push through deep snow. Because the new CR-V doesn’t sit as close to the turf, it is now more suitable for off-road adventures.

Although the CR-V has always been an easy vehicle to drive, it did not offer the most engaging driving experience. However, the 2017 model now delivers an extra dose of fun. It has one of the best electric steering systems in the class, which makes for a sportier driving experience. You will also like the CR-V’s composed handling.

You can expect the 2017 Honda CR-V to deliver a soft ride. Featuring upgraded suspension bushings, the all-new CR-V quickly absorbs bumps in the road. While most people will use the crossover as a daily-driver, it is also a great choice for taking an out-of-town journey. Honda did a great job of keeping wind and road noise out of the cabin.

Some car shoppers found the previous CR-V to be a bit on the bland side. To make the 2017 Honda CR-V more appealing, Honda installed a more aggressive-looking front fascia. A wide stance also gives the crossover a more athletic character. Aside from the base model, all of the other trims flaunt a rear spoiler. Meanwhile, chrome exhaust tips and LED headlamps are featured on the upscale Touring model.

On the inside, the 2017 Honda CR-V has a more modern appearance than the previous generation. A digital gauge cluster makes the cockpit look especially exciting. Of course, everyone in your family can take advantage of the crossover’s roomy dimensions. The available rear-seat legroom has increased dramatically.

In terms of pricing, the EX model is a step above the base LX model. It costs around $26,700, which is actually a great bargain. Not only does the EX model benefit from the new turbocharged engine, but it also comes standard with a rear spoiler and 18-inch alloy wheels. Some of the key features include smartphone integration, an upgraded backup camera, and extra safety technologies.

Like the outgoing model, the new 2017 Honda CR-V is expected to earn a five-star safety rating. Several high-tech driving aids are offered, including automatic braking technology and adaptive cruise control. If you happen to lose focus while at the wheel, Road Departure Mitigation technology can steer you back onto the pavement.

1. Not Good for Hardcore Off-Road Excursions

The 2017 Honda CR-V is now a more formidable SUV for tackling off-road trails. However, it is still not able to handle extremely rough terrain. If you intend to travel on challenging terrain, consider the Jeep Cherokee Trailhawk.

2. Not Great for Towing

With a maximum towing capacity of only 1,500 pounds, the new CR-V is not a good choice for towing a load. Some of its V6-powered rivals can tow a lot more weight.

Although the CR-V’s infotainment system offers Apple CarPlay and Android Auto, it is a bit complicated to use. The touch-screen display does not always respond to the user’s tap. Some people have also complained about the system’s menu layout.

The Ford Escape and the Nissan Rouge compete against the 2017 Honda CR-V. While these small crossovers have a high rating, the CR-V’s reputation for being reliable gives it the upper hand. The CR-V also packs significantly more power than the Nissan Rogue.

With so many notable improvements, the 2017 Honda CR-V proves to be one of today’s best small crossovers. In contrast to previous generations, the new CR-V has a sporty character on the road. An all-new turbo engine makes the CR-V even more tempting. If you want the premium Touring model, expect to shell out more than $33,000.