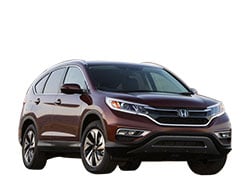 Should You Buy a 2016 Honda CR-V? Here are the Pros and Cons

Over the course of its previous three generations, the Honda CR-V has been changing from the softer, yet basic alternative to the more rugged and ‘truckier’ vehicles such as the Jeep Wrangler and Suzuki Sidekick. It has turned into what can only be described as a vehicle that is now more family-oriented.

Over that transition, the CR-V has witnessed great success, helping towards kick-starting the small SUV crossover auto segment that is seeing tremendous growth every day. The 2016 Honda CR-V is a modern and compact crossover SUV that seats 5 and is among the best-selling cars in this class.

The current version of the Honda CR-V debuted during the 2012 model year. In 2015, it was given a thorough update. For 2016, it's essentially unchanged, except for a few retouches and the inclusion into the group of a Special Edition model.

According to critics, the 2016 CR-V is a very able performer that brings with it very precise steering.

Test drivers note that when in the city, your CR-V’s 4-cylinder engine will display decent acceleration even when packed with cargo and a full passengers complement. The reviewers concur that the CR-V delivers a quiet, smooth ride, decent acceleration and has sufficient power for your day-to-day commuting.

Test drivers have reported that the Honda CR-V’s steering is responsive, secure, and predictable, and brings poised handling.

Reviewers observe that the 2016 Honda CR-V is also among the quietest small SUV crossovers available regarding wind and road noise.

The five-passenger 2016 CR-V crossover SUV comes in 5 trim levels: SE, EX, LX, the EX-L plus the Touring. Each trim level comes with its own set of unique features. The CR-V received a major 2015 makeover, so there are few changes for the 2016 model year.

According to auto critics, the interior of the 2016 Honda CR-V looks contemporary.

Test drivers have appreciated the abundant tech features on the CR-V helping to make it stand out.

Reviewers have noted that the front seats of the 2016 Honda SR-Vare comfortable, spacious, supportive and adjustable.

A sizeable storage bin in the center console provides ample space for small personal items like a purse.

Although the 2016 Honda CR-V has not undergone government testing, the 2015 model did get:

For IIHS testing, the crossover received the best rating, getting "Good" for moderate overlap frontal-offset and the small-overlap impact tests.

The new 2016 Honda CR-V brings a 36,000-mile three-year limited warranty as well as a 60,000-mile five-year powertrain limited warranty. The C-V has not been the subject of NHSTA recalls.
Buying Tip: To avoid overpaying on a new car, shop prices online first. Get up front pricing before you walk into a dealership. We recommend the following free services; Car Clearance Deals,   Edmunds,   CarsDirect,   NADAguides  &  Motortrend. These free services will offer you the lowest prices and supply you with multiple competing price quotes. You will know the best price before you visit the dealer.

The automatic transmissions of the 2016 CR-V gives less output than what you will get in several rival engines. Test drivers and critics note that the CR-V’s power won’t really wow anyone.

Although the rear seats are easy to fold down, auto writers says they don’t lay down completely flat, hence limiting what could have been more ample cargo space.

Critics note that the 2016 Honda CR-V is not really silent, although it is quieter. Although in general there isn’t much road noise, you are going to hear every bump when the road surface is bad.

The 2016 Honda CR-V steering feedback feels numb, and you will experience lots of body roll as you take corners which reduces driver excitement.

The 2016 Honda CR-V has been compared with the Mazda CX-5 and the Hyundai Tucson.

While they may not necessarily be the most thrilling of vehicles in the world, small crossovers are offering lots of functionality at prices that are quite attractive. Their engines are characteristically powered and small but quite fuel-efficient. The Honda CR-V will give you precisely that: plenty of interior space, reliability, and fuel efficiency.

• 2018 Honda CR-V trim levels. What you get with each trim configuration.