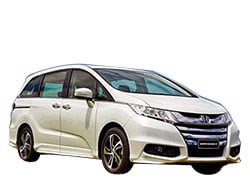 Should You Buy a 2016 Honda Odyssey? Here are the Pros and Cons

From what the test drives say, the 2016 Honda Odyssey is set to be the number one family car beating several of its rivals. It picks up well on speed for a family car, thanks to the V6 engine and 6-speed auto transmission under the hood. While we can’t account for everyone’s height, on the average critics promise the 2016 Honda Odyssey to have all the space required for a family of seven.

As a contesting mate, Toyota is releasing their 2016 Sienna as well, voted to have top notch specs as well. It’s going to be a tight fight convincing the buyer though the 2016 Honda Odyssey already has a head start going by the performance ratings.

The first thing to notice is the change in exterior hues, which is a switch of two of the five available options. Modern steel, obsidian blue, and white diamond pearls have been maintained in the new model. The new arrival hues include dark cherry and alabaster silver, a switch from the previous deep scarlet and lunar silver.

The 2016 Honda Odyssey will spot high-quality cloth seats with the option of leather on request. Both driver and passenger seats are powered while the quad bucket seats at the back add in more sitting space. The windows are power controlled and enough doors on the family van—at the front, mid-section, and the back.

Placing both 2016 Honda Odyssey and the 2016 Toyota Sienna side by side, the former wins on efficient fuel utilization. It comfortably maintains mpg rating of 19 in city cruising and 28 while accelerating on highways. It’s the same fuel economy found in the 2015 Honda Odyssey; nonetheless, it’s way above the Toyota Sienna’s 18mpg for city and 25mpg on the highway.

For a family car, a V6 cylinder engine under the hood is a commendable move as it deters the buyer from going for a luxury SUV. Thus, it scores full points for that driver who wants a spacious car that also picks well on the road while ferrying more than five passengers. To fuel power to the V6 engine is a responsive six-speed automatic transmission—same traits provided by the 2016 Toyota Sienna though the Toyota packs more horsepower on the road.

Not only does the 2016 Honda Odyssey beat the Toyota Sienna on fuel economy, but it also carries a bigger gasoline tank. It fills up to 21 gallons of gasoline, which is a gallon more compared to the Sienna’s 20 gal capacity. It may not seem much, but that extra gallon does matter on the road if it gives you a great fuelling interval.

Critics say one of the best updates inside the 2016 Honda Odyssey is the highly responsive 8-inch infotainment system and plenty of conveniently placed function buttons. The sliding door automatically opens and shuts by the push of a button, and a keyless entry button as well to power the engine on. The rear has a camera for aiding on the reverse or packing and an adjustable steering for better handling on the road. Additionally, there is a built-in cruise control option ensuring the family car maintains a steady speed where required.

Nothing has been changed on the entertainment lineup, so the consumer is getting the same dose of fun like in 2015. The 2016 Honda Odyssey packs a high-end AM-FM stereo box with both CD and MP3 player. There is an internal hard drive for extra music options and an auxiliary audio input to plug in a smartphone or iPod. If no auxiliary cable is available, the driver can still link their playlist via the inbuilt Bluetooth support.

As it’s going to be a family car, the 2016 Honda Odyssey comes prepared in all the right specs to protect the entire family. There is a surround airbag setup covering the driver’s, passengers, side head and read head areas. The brake setup is the industry standard 4-wheel ABS applied on all wheel Discs. For further safety, the vehicle has inbuilt:

Test drivers were impressed by how large both cargo and passenger space is on the 2016 Honda Odyssey. It seats a maximum of 7 passengers with the option of adding one extra seat to accommodate a maximum eight. The second row can be detached to create an even bigger cargo space when the need arises.

10) Affordable for the Family

Both starting prices for both the 2016 Honda Odyssey and the 2016 Sienna are quite close, around $29,000 on the market. For such a pocket-friendly price tag, one gets many of the tweaks expected on a modern SUV. Critics even vote this new family van as the ultimate choice when considering both performance and price.
Buying Tip:

Reasons Not to Buy a 2016 Honda Odyssey – The Cons

It can get quite tedious moving the second-row seats to create more cargo space on the car. One may need to call additional help while traveling alone in the van.

For anyone expecting more tweaks to boost entertainment, this will be a major let down, especially for those who wanted to see a CD changer or Satellite radio when off-road.

It may not be the family van to go for if the driver is looking for a different look altogether. Pretty match the same exterior design and tweaks have been maintained unless the buyer requests for customizing.

Despite the few drawbacks that can be overlooked, the 2016 Honda Odyssey is the top ranking choice for frequently traveling families. It packs immense power thanks to the V6 engine and six speed auto-transmission drive train. There are two new additions to the exterior color palette that is refreshing.
2018 Honda Odyssey Buying Guide:

• 2018 Honda Odyssey trim levels. What you get with each trim configuration.

Compare Local Dealer Prices
Find the Best Deal
Save Thousands on a 2016 Honda Odyssey! Start Your Own Online Price War