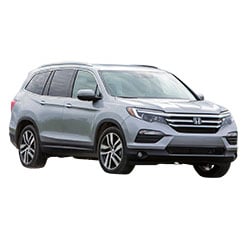 Should You Buy a 2017 Honda Pilot? Here Are Some Reasons For and Against

The 2017 Honda Pilot is definitely worthy of a test drive. It remains one of the most rewarding three-row crossover’s on the market. Families will like its roomy interior and quiet ride. Although the Pilot is rather large, it handles the road like a much smaller vehicle. Outstanding reliability gives the Pilot yet another advantage over some of today’s other SUVs.

This year, the Pilot’s infotainment system is now compatible with Apple CarPlay and Android Auto. No other significant changes were made to the new model.

All versions of the 2017 Honda Pilot are powered by a strong V-6 engine. It develops a competitive 280 horsepower and 262 pound-feet of torque. You can stick with the standard six-speed automatic transmission or upgrade to a nine-speed transmission. When accelerating from a standstill, the crossover hustles to 60 mph in a brisk 6.8 seconds.

The 2017 Honda Pilot returns very good gas mileage for an eight-passenger vehicle. Honda’s famous i-VTEC engine technology and direct injection enhance the SUV’s overall efficiency. Drivers can anticipate getting a solid 20 mpg in the city and 27 mpg on the highway. Because of the Pilot’s fuel savings, it is a great choice for daily commuting.

While driving the 2017 Honda Pilot, you are bound to like its responsive steering system. Unlike some modern steering systems, the Pilot’s system has a natural feel. You will also appreciate the Pilot’s sharp handling. It drives more like a Honda Accord opposed to a traditional SUV. You will be able to quickly shift lanes with confidence.

4. Can Be Used for Towing

When equipped with the available AWD system, the 2017 Honda Pilot can tow up to 5,000 pounds. This is about 1,500 pounds more than the front-wheel-drive version. This means that you can easily tow pop-up campers and 18-foot fishing boats. The six-speed automatic transmission does a great job of selecting the most appropriate gear in hilly areas.

5. Performs Well in the Snow and Mud

The Pilot is not just a street-only SUV. An optional AWD package enables you to travel off the beaten path. Although drivers should not attempt to tackle extremely rough terrain, the Pilot will perform well on a typical off-road trail. However, keep in mind that the even the FWD Pilot can be equipped with a convenient Snow mode for traveling in wintry weather.

In the past, some people considered the Pilot to be a rather plain-looking SUV. Fortunately, the new Honda Pilot packs plenty of style. It looks noticeably sportier than the previous generation. A handsome, three-bar chrome grille helps accentuate its refined appearance. Flaunting LED headlamps and a striking set of 20-inch wheels, the Pilot Elite has an additional degree of flair.

Honda designed this SUV to accommodate up to eight passengers. However, the top-of-the-line Elite model only seats seven people. The first two rows of seats are especially spacious. When attempting to climb into the third-row seat, the second-row seat slides forward at the touch of a button. You can also make use of the SUV’s flexible cargo area.

Honda priced the base LX model at $30,600. This is not a bad deal for such a family-friendly SUV. It is stylish and provides just enough creature comforts to keep most drivers happy. Some of the notable standard features include a seven-speaker sound system, a backup camera, and Bluetooth technology.

You can always rely on the 2017 Honda Pilot to keep your loved ones safe. It scored an outstanding, five-star safety rating. While every trim benefits from a backup camera, the optional Honda Sensing safety package will appeal to a lot of drivers. Lane departure prevention helps keep you on track at all times. Automatic braking technology and Road Departure Mitigation also come with the safety package.

The 2017 Honda Pilot Elite is for the drivers who demand a luxurious ride. It is the only trim that provides blind-spot monitoring and rear cross-traffic alert. Features, such as ventilated seats and a noise-reducing glass, make the Elite model even more tempting.
Buying Tip: To avoid overpaying on a new car, shop prices online first. Get up front pricing before you walk into a dealership. We recommend the following free services; Car Clearance Deals,   Edmunds,   CarsDirect,   NADAguides  &  Motortrend. These free services will offer you the lowest prices and supply you with multiple competing price quotes. You will know the best price before you visit the dealer.

The top trims come standard with a nine-speed automatic transmission. Unfortunately, this transmission often has trouble choosing between gears. The standard transmission actually performs better in real-world driving conditions. If you can forgo the extra features, the lower trim levels may be a bit more enjoyable to drive.

Honda’s touch-screen infotainment system is a step below the competition. It does not always respond immediately to the user’s touch. This problem can become extremely annoying over time. Some drivers will also have trouble navigating through the system’s menu layout.

Although the 2017 Honda Pilot offers a number of safety technologies, some of them are a bit too sensitive. When traveling on the highway, the available adaptive cruise control system does not always perform smoothly. The forward collision warning system suffers from the same issue.

Some of the direct competitors include the Chevrolet Traverse and the Ford Explorer. When it comes to long-term reliability, the 2017 Honda Pilot has an advantage over these rivals.

Like last year’s model, the 2017 Honda Pilot remains one of the highest-rated family vehicles on the road. Good fuel economy makes the Pilot perfect for hauling your family around on a daily basis. Although an optional engine is unavailable, very few people will complain about the Pilot’s overall performance. Expect to shell out roughly $48,000 for the top-of-the-line Elite model.