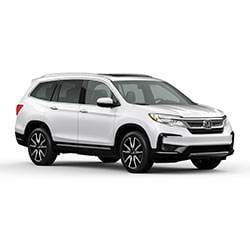 Price Tip:
To find the best possible price on a new Honda Pilot, shop prices online first. Get up front pricing before you walk into a dealership. We recommend the following free services; Car Clearance Deals,   Edmunds,   NADAguides,   Motortrend  &   CarsDirect
These services will offer you the lowest prices and supply you with multiple competing price quotes. You will know the best price before you visit the dealer.

How to Calculate The Dealer Cost of a Honda Pilot

The 2022 Honda Pilot remains a popular choice amongst drivers who like the idea of having an extra row of seats but might not necessarily want something too big. The Pilot is a solidly built SUV that has nice amenities, advanced technology, and a V6 engine that gives it a good amount of power.

The 2022 lineup has been tweaked. Last year, it started off with the LX and EX. Those have been taken off the list for 2022, so now the Sport is the first option. This results in the Pilot having more standard components than it did previously, primarily in terms of convenience and technology. This also means that the starting price has increased, fairly significantly.

There are quite a few trims to choose from. The Sport is followed by the EX-L. The EX-L's notable upgrades include leather seats, a power moonroof, and a power tailgate.

The middle of the lineup consists of the Special Edition, TrailSport, and Touring. On the Special Edition, there is wireless charging, and the liftgate is enhanced with hands-free operation. The TrailSport's name gives a hint as to what this SUV is designed for. It comes standard with all-wheel drive, which would otherwise cost about an extra $2,000. It also has navigation, fender flares, and exclusive 18-inch gloss black alloy wheels.

The Touring is more refined with 20-inch wheels, heated second-row seats, and available captain's chairs. It features blue LED ambient lighting, and it actually has a number of technological upgrades. They include a premium speakers, Wi-Fi capability, an in-cabin intercom system, and a rear-seat entertainment system. With that system, passengers would get to enjoy watching BluRay discs, interacting with certain apps, and using a 10.2-inch high-resolution screen. To keep the audio separate from what the people in front may be listening to, Honda provides a pair of wireless headphones.

At the top of the lineup, the Elite and Black Edition are pretty close to each other in terms of what they have to offer, and they're considerably more upscale than the others. They both have perforated leather seats, panoramic roofs, LED map lights, and floor mats in every row that are easy to clean. Their steering wheels are heated to offer some additional warmth, and in the summer, people will appreciate the ventilation in the front seats. Like the TrailSport, they come with standard all-wheel drive. The main difference between the two is that the Black Edition has black accents and a dark color scheme.

All of the trims run on the same type of V6 engine. It has a displacement of 3.5 liters, and it can crank out 280 horsepower and 262 pound-feet of torque. This is more than a decent amount of power. The Pilot should be able to handle what most drivers have planned.

If a trim doesn't automatically come with all-wheel drive, that type of drivetrain would be an option. Two-wheel-drive models do come with a snow mode as part of the intelligent traction management system. This would be helpful, if not as useful as all-wheel drive, in case anyone ever gets stuck dealing with snowy conditions. All-wheel-drive models have snow, sand, and mud modes.

All trims have active noise cancellation to keep their cabins a little quieter, hill start assist to help them get started on slopes, and remote engine start for convenience. They also have eco assist programs to enhance fuel efficiency. That being said, this SUV isn't extremely efficient, as it can earn 20 miles per gallon in the city and 27 miles per gallon on the highway. With all-wheel drive, the Pilot would have slightly reduced fuel efficiency.

Honda gives every trim LED headlights, rear privacy glass, LED fog lights,and LED lights in the rear. The smart entry system makes it easy to unlock the doors; all it takes is to simply touch the door handle with the key fob being in close proximity. When someone has parked the car, he/she just has to walk away from the SUV and the doors will lock automatically.

The side mirrors on the entry-level Sport have integrated turn signals. On all of the other trims, they have a memory function and can tilt-down when the Pilot is in reverse to help the driver see any parking guidelines. On higher trims, they have the addition of auto-dimming and power-folding functions.

Captain's chairs are found on the higher trims. Some people prefer this configuration because it makes it easier to access the third row and gives everyone in the back a bit more space. The other trims have bench seats in their second rows and have seating capacities of eight. Either way, there would be about 38 inches of second-row leg room and approximately 32 inches of third-row leg room.

Every Honda Pilot has Bluetooth, Apple CarPlay, Android Auto, and an eight-inch touchscreen. SiriusXM and HD Radio are other standard components, and navigation and the rear-seat entertainment system detailed above are found on higher trims. Unfortunately, there aren't tons of USB charging ports like some competitors have; the best that the Pilot can do is to offer two in the second row and two in the first row.

The 2022 Honda Pilot is practical, capable, and packed with technology, so it should please a lot of potential buyers.
Honda Prices:

Note: All Honda Pilot MSRP, invoice and dealer cost dollar figures above are subject to change without notice.