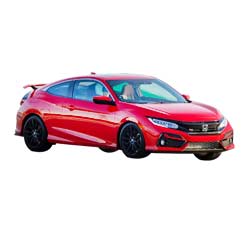 Buyers in the market for something sporty but affordable should take a peek at what the 2020 Honda Si has to offer. Its design is contemporary and utilitarian, not to mention cozy. It exists within a dying market, sure, but the Civic leads the pack of remaining sedans. It is also available as a hatchback, which adds some diversity to the line-up.

The Civic's current generation emerged back in 2016, and it was a huge change from the underwhelming Civic from the prior ten years. For 2020, the hatchbacks get even more updates. The Civic's front and rear fascia have been restyled to include blacked-out front trim and new housings for the fog lights.

A lot of automakers are chucking the stick shifts, but Honda is going the reverse route by adding the 6-speed manual transmission option to more variants. There is a standard continuously variable transmission (CVT) that gets paired with the 4-cylinder engine. The two lowest trim levels have a 4-cylinder that gets 158 hp and 138 lb-ft of torque, but the upper trim levels get a turbocharged boost that generates 174 hp and 162 lb-ft of torque.

With that being said, let's get into more of the details.

A few things are new on the 2020 Honda Civic line-up. First, the Civic Si models get restyled front and rear fascia. The front fascia has new trim and housing for the fog lights. Second, more insulation has been added to the Hatchback in order to reduce the amount of road noise that enters the cabin. Finally, the Si gets revisions to the transmission gearing and new interior trim.

There are multiple styles to choose from on the 2020 Honda Si. There is the regular sedan, the Civic Si, the Type R, the Hatchback, the Coupe, and the Si Coupe.

The LX comes equipped with Honda Sensing technology, a rearview camera, and a 4-speaker sound system. Bluetooth comes standard, but you will not be able to integrate your smartphone with this trim level. The security system comes with a remote entry feature as well as trunk release. Power side mirrors and taillights with integrated LED bars are also part of the whole package.

The Sport has quite a few nice upgrades, though it is quite similar to the LX. It has dynamic guidelines on the rearview camera, an 8-speaker audio system, a hi-res 7-inch touchscreen display, and smartphone app integration through Apple CarPlay and Android Auto. The Sport does get treated to flashier elements like the sport pedals, leather-wrapped gear shift knob and steering wheel, and fog lights.

Of course, the EX has even more. On this trim, buyers will get the turbocharged engine with 16.5 psi boost pressure. A shark fin antenna, one-touch tilting power moonroof, and body-colored decklid spoiler adorn the exterior. On the inside, there is an 8-way power-adjustable driver's seat, heated front seats, dual-zone automatic climate control, SiriusXM Satellite Radio, and HD Radio. Honda Lane Watch gets added to the list of standard driver aids, which is a nice bonus.

The EX-L takes all of that and equips even more features. There is an auto-dimming rearview mirror and HomeLink system for remote operation of your garage door and home security system. This trim also gains chic leather seats.

Finally, the line-topping Touring trim adds a 10-speaker 450-watt premium sound system and built-in navigation with voice recognition to the list of infotainment features. Like the Sport, the Touring gets sport pedals for a fancy touch. The rear outboard seats gain the heating capability, and the front passenger's seat becomes 4-way power-adjustable. The exterior looks flashier with its chrome door handles, heated side mirrors with integrated LED turn indicators, rain-sensing windshield wipers, and auto-on/off LED headlights.

The 2020 Honda Si has a driving performance that trumps many of its competitors. The 1.5-L turbocharged engine that comes on the higher trim levels generates a ton of power - enough to get the Civic from 0 to 60 mph in just 6.7 seconds. This is not a performance vehicle, but it sure could fool a person.

All other driving aspects are phenomenal too. The brakes are appropriately firm, and putting your foot down on them feels totally natural. The steering feels appropriately weighted as well and provides a good amount of feedback. Meanwhile, the handling is precise enough to make taking sharp turns fun. Overall, the Civic is an exciting vehicle to drive when you have the turbo engine equipped.

Fuel economy is normally a strong point for Honda, and the 2020 Honda Si is no exception to this rule. The Civic sedan is rated for 36 mpg combined on the turbo/CVT versions, and real-world tests match the EPA's ratings pretty closely. This is a smart option for those looking to save more at the pump.

The 2020 Honda Si has many practical elements, especially when it comes to safety and comfort. However, it is a spunky sedan with a well-rounded performance. It excites buyers and auto gurus alike and is certainly worth at least a test drive.

How to Calculate The Dealer Cost of a Honda Civic Si

Note: All Honda Civic Si MSRP, invoice and dealer cost dollar figures above are approximate amounts. Prices are subject to change without notice.