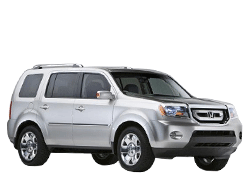 Should You Buy a 2015 Honda Pilot? Here Are Some Reasons For and Against

The 2015 Honda Pilot is a midsize crossover that plays carlike without sacrificing any of the room that buyers have come to expect from the best SUVs. It not only seats 8, but it does so comfortably, with 4 passenger doors and, of course, the back hatch to access whatever (or whoever) owners want to stash back there.

The Pilot features a 3.5 liter, 6-cylinder engine with a 5-speed automatic transmission and front wheel drive. Its fuel efficiency is rated at 21 miles per gallon. According to U.S. News and World Report, the 2015 Honda Pilot earned a 4-star safety rating by the National Highway Traffic Safety Administration (NHTSA).

What Two experts had this to say about the 2015 Honda Pilot:
AutoTrader reports that the Pilot is praised for its exterior and interior design, which it characterizes as family-focused. It also explains that as a crossover it still offers all of the features that have always made it popular, including the third row seating, a strong interior look, comfortable seating, and of course all of the other equipment.

Likewise, Kelley Blue Book also offered its praises of the Pilot for its efficient and sleek exterior that makes maneuvering through traffic and in tight spaces smooth and simple. Furthermore, with seating for as many as eight passengers, the vehicle can holds the same number of people as many full-size SUVs. Additionally, KBB points out that Honda's have a high resale value, so the Pilot can be counted on as a good buy.

Safety Rating--The 2015 Honda Pilot earned a 4-star overall safety rating out of 5 possible from the NHTSA. The Pilot achieved a 5 star rating in the side crash test, a 4 star in the roll-over test, and also 4 stars in the front crash test. Notable safety features include:

The Pilot has been ranked 19 out of 23 for all midsized SUVs. Unfortunately, most drivers rate it low in terms of quality and overall experience when compared to other vehicles of its type.

Reviewers give mixed opinions when it comes to the interior of the Honda Pilot. Some call it “quiet at highway speeds,” others say that the noise of other vehicles in its class are “less intrusive” than the Pilot.

The Pilot features a number of extras that are nice in making this a pleasant drive. These include a navigation system that includes a voice recognition feature, a multi-information display, rear DVD entertainment system, USB audio interface, Bluetooth connectivity, home remote system, tri-zone climate control, rearview camera, and more.

Just as is the case with any car with a high seat, it takes a little getting used to, but once the driver does, it’s kind of nice. Anyone who needs convincing should try it the next time they go to the bank drive up or a mailbox. Sitting high is a lot more convenient than feeling like a driver is on their knees in a smaller vehicle.

Many reviewers are rough on the Honda Pilot when it comes to the back cargo space, but when compared with other similar vehicles, it ranks favorably. The layout of the cargo compartment is good, without a lot of molding that would get in the way for small or large items that so many owners would like to carry. Further, the boxy design of the vehicle has the same advantages in terms of its ability to carry more cargo just like the old Jeeps did.

Most reviewers call the styling of the Pilot comparable to other vehicles of its type. Many add, however, that it tends to be a little “overly macho” in its design.

The Pilot delivers a firm ride that is smooth and responsive, probably more so than many competitors, which might be a surprise to most.

If there are a lot of good reasons to buy a 2015 Hondo Pilot, they don’t include some of the standard features that many car buyers have come to expect from a new car. And anyone who needs all-weather capability should opt for the 4-wheel drive system, which comes on several other Honda models, most notably the Touring Pilot. And even though the Touring model starts at about $3000 more than the Pilot, it might be worth the investment to get everything it adds.

The 2015 Honda Pilot Compared to its Competition
There are several vehicles that compare favorably with the Honda Pilot. These include other members of the small SUV category such as, most notably, the 2015 Ford Explorer. The pilot does list for about $2000 less than the Explorer, and although there are some favorable advantages that the Pilot has over this competition, in terms of overall ride, the Explorer is considered superior. In fact, some interior features of the Pilot were described as “cheap” by several reviewers.

Some reviewers also criticize the “overwrought chrome” on the exterior, which might end up scaring off some buyers as not conservative enough for a lesser priced vehicle. On the interior, reviewers also come down hard on the control panel, which is not only “rendered in lots of hard plastic,” but is also described as “busy and chunky.” The only extra that is included is the rear camera.