2020 Honda Accord vs Toyota Camry 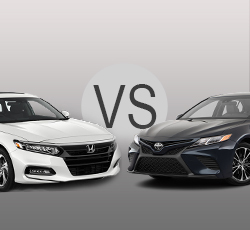 The Honda Accord and Toyota Camry have both been heavy hitters in the midsize sedan market for a long time. In fact, the Accord is in its tenth generation, while the Camry is in its eighth. They have both built reputations based on being reliable and offering consumers great value. Moving into 2020, both of these vehicles are still trying to outdo the other.

It is very likely that anyone in the market for a sedan will at least consider these two options. Ultimately, the better option is going to depend on personal priorities when it comes to vehicle features. That said, the following guide breaks down the similarities and differences between the 2020 Accord and 2020 Camry in great detail.

Both of the powertrains available for the 2020 Accord are appealing. The standard for much of the lineup is a turbocharged 1.5L four-cylinder that generates 192-horsepower and 192 lb-ft of torque. For this engine, Honda has gone with a continuously variable transmission.

The optional engine for the Accord is a turbocharged 2.0L four-cylinder. With this, drivers can expect 252-horsepower and 273 lb-ft of torque. A ten-speed automatic comes along with this engine. Buyers who go with the Sport trim level have the option of going with a six-speed manual transmission at no extra cost.

Moving onto the 2020 Camry, there are once again two strong engine choices to consider. The first is a 2.5L four-cylinder that is good for 203-horsepower and 184 lb-ft of torque. When underneath the hood of the XSE trim, it manages to put out 206-horsepower and 186 lb-ft of torque instead. An eight-speed automatic transmission is standard across the line.

For upper trim levels, Toyota has gone with a 3.5L V6 engine. It produces an impressive 301-horsepower and 267 lb-ft of torque. As a result, the Camry definitely offers more power than the Accord and is the obvious choice for anyone who wants the muscle that comes with a V6.

It is worth noting that select models of the Camry are also available with all-wheel drive. Unfortunately, it is not an option on versions with the more powerful engine. Buyers who prioritize AWD will have to go with the Camry and stick with the base engine.

Surprisingly, the Camry also wins when comparing upgraded engines, although just slightly. Accords with the 2.0L engine get 22mpg in the city and 32mpg on the highway. The Camry gets great numbers for a V6, with a rating of 22mpg city and 33mpg on the highway.

For even greater fuel efficiency, there are hybrid versions of both the Accord and the Camry. For the Accord, Honda went with an inline four-cylinder along with two electric motors. They combine to make 212-horsepower and come with a continuously variable transmission. For the Camry, Toyota went with a 2.5L four-cylinder engine and a single electric motor. It delivers 208-horsepower to drivers.

Going with the Camry hybrid will mean getting 51mpg in the city and 53mpg on the highway. The slightly more powerful Accord will give drivers 48mpg city and 47mpg highway. Both sets of numbers are impressive but fall behind other hybrid options, such as the Prius.

The Accord and Camry give drivers identical warranties. They both go with three years or 36,000 miles overall along with five years or 60,000 miles for the powertrain. Predicted reliability is where the Camry gets a significant edge, however. J.D. Power awarded the Accord with just 2.5 stars out of five, which is considered slightly below average. On the other hand, the Toyota Camry got 3.5 out of five, which is a bit above average.

The 2020 Accord and Camry both seat up to five people. For the Accord, the overall passenger volume is 102.7 cubic feet. Legroom is impressive in both rows of seating, with the front having 42.3-inches and the back having 40.4-inches. Headroom is also respectable, with 37.5-inches in the front and 37.2-inches in the back.

Going onto the Camry, it has 42.1-inches of front legroom and 38-inches of rear legroom. As a result, taller passengers are likely to prefer the Accord. The amount of headroom is similar between the two sedans, with the Camry giving front passengers up to 38.3-inches in the front 38-inches in the back. It is important to know that adding a moonroof to the Camry reduces the front headroom to 37.5-inches.

Cargo space is also a top priority for many shoppers. The Accord claims another victory in this category, offering up 16.7 cubic feet. While this is merely average for the class, it is more than the 14.1 cubic feet found in the trunk of the entry-level Camry. Upper trims get a little more room to work with, going up to 15.1 cubic feet instead.

Maneuverability is not much of an issue for sedans. It is definitely not a deciding factor between the Accord and Camry, which have nearly identical exterior measurements. They are both approximately 192-inches in length and 57-inches tall. The only somewhat noteworthy difference is in the width, with the Accord being 73.3-inches and the Camry being either 72.4-inches or 73.1-inches, depending on the model.

When it comes to tech features, both the Accord and Camry come standard with a 7-inch touchscreen. While the Camry has smartphone integration standard across its trim lineup, the Accord does not even offer it on its entry-level trim. Both Apple CarPlay and Android Auto are standard on the Accord Sport and up, however.

Drivers should not have trouble using the infotainment system found in either vehicle. Both of them offer a mixture of physical and touch controls, making it easy to navigate through menus. The Accord's system, in particular, responds to touch commands quickly.

Overall, the Camry wins the tech wars, coming with significantly more standard features. Its standard stereo system has six speakers, two more than is found in the entry-level Accord. The Camry also comes standard with a WiFi hotspot, something that is once again only available for the option from Honda.

Consumers hoping to use safety test results to help them choose between the Accord and Camry are out of luck. The National Highway Traffic Safety Administration awarded both of these vehicles with five out of five stars overall. They both also got five stars in the three main forms of crash testing performed by the NHTSA.

At the same time, the Insurance Institue for Highway Safety named the Honda Accord as a Top Safety Pick. It received a 'good' rating in the six major forms of crash testing performed as well as a 'superior' rating in frontal crash prevention. While the Touring trim level received only a 'marginal' rating for its headlights, all other trims were considered 'acceptable'.

The IIHS actually awarded the Toyota Camry with the Top Safety Pick Plus award. It received the same scores in crash testing and prevention as the Accord. What likely gave it an edge, however, was the fact that the headlights were rated 'acceptable' for all trim levels.

Both the Accord and the Camry come with an impressive list of standard driver aids. For the Accord, buyers get the Honda Sensing Suite. It includes adaptive cruise control, lane keep assist, forward collision warning, automatic emergency braking, traffic sign recognition, lane departure warning, and a road departure mitigation system. Also standard for the Accord is a rearview camera as well as automatic high beams.

The Camry has what is known as the Toyota Safety Sense-P bundle of features. It has many of the same things as the Honda Sensing Suite but is missing traffic sign recognition and road departure mitigation. The Camry does add pedestrian detection, something that is not even available on the Accord.

Available driver aids are similar between the two sedans. Drivers can get blind-spot monitoring and rear cross-traffic alert on either option. The same is true of a head-up display. While the Accord offers front and rear parking sensors on select models, the Camry has a full-blown surround-view camera system available.

The Accord has a lower suggested price than the Camry, but not by much. The entry-level Accord will set drivers back about $23,870, while the entry-level Camry is going to cost them around $24,295. At the same time, the Accord gets much more expensive as buyers go up the trim ladder. The top trim costs around $36,100 for the Accord, as opposed to just $31,040 for the trim-topping Camry.

A good argument can be made for the Camry having a higher starting price. Features like Android Auto, Apple CarPlay, and a WiFi hotspot more than justify the extra four hundred dollars or so. Drivers also get satellite radio standard when going with the Camry.

The "true cost to own" number of a new car factors in things such as maintenance, fuel consumption, and insurance for a vehicle. Savvy buyers often take these numbers into consideration when making their final choice. For this guide, a comparison is made between the Sport trim of the Accord and the SE trim of the Camry. Both of these fall in the middle of their respective ranges.

Of course, these numbers will change depending on many factors, including how much the vehicle is driven and the driving conditions. For the above estimates, it was assumed that the vehicle was driven 15,000 miles a year for all five years. Since the numbers are so similar between the Accord and the Camry, it is safe to say that they will cost roughly the same to own, no matter how and how much they are driven.

Looking at both the 2020 Honda Accord and 2020 Toyota Camry in detail makes it easy to see why these two sedans have had such enduring popularity. Neither vehicle is going to be a bad choice. Buyers will ultimately have to decide what they are looking for the most out of their new car.

Anyone who lives where there is bad weather or who drives rough back roads will want the Camry for its available all-wheel drive. This vehicle also has a good deal of safety and tech features, as well as a highly-fuel efficient engine.

On the other hand, drivers who do not need an all-wheel-drive vehicle may find that the Accord is the more practical choice. It offers a larger trunk as well as a few extra standard driver aids. Buyers can also get an Accord for less than the Camry, making it the obvious choice for anyone who is looking to spend as little as possible on their new sedan.

Save Money on a 2020 Honda Accord:
Are you Shopping for a New Vehicle? Find the Best Deals with "Free - No Hassle" Prices Quotes.

In Depth 2020 Honda Accord Comparison Guides: