2018 Toyota Sienna Pros vs Cons. Should You Buy? 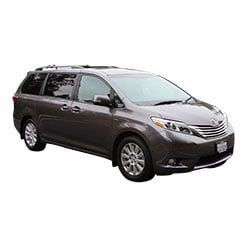 Should You Buy a 2018 Toyota Sienna? Here Are Some Reasons For and Against

The Toyota Sienna has long been one of the nation's best-selling and highest-rated minivans, and it's getting a brand new look and plenty of new features for 2018. This mid-cycle refresh is an exciting step for the most popular vehicle in this category for two years in a row. Here's what minivan shoppers need to know about the 2018 Toyota Sienna.

The 2018 Toyota Sienna shares the same basic layout, platform, and dimensions as the 2017 model. It still seats up to eight, with the option to swap out the second-row bench for captain's chairs. Both the Entune infotainment and optional rear-seat entertainment systems have been updated with new software and interfaces for 2018.

In the Toyota Sienna, cargo space measures up to 39.1 cubic feet behind the third row, 87.1 behind the second row, and 150 behind the first row. You can opt for a power liftgate to make it easier to load groceries, luggage, or equipment.

Perhaps the biggest update for the 2018 Toyota Sienna, the Toyota Safety Sense package of features is now standard at all trim levels (previously an option only on higher trims). Drivers will benefit from assistance features that include automatic emergency braking with pedestrian detection, adaptive cruise control, Lane-Departure warning with steering assist, and automatic high-beam headlights.

All 2018 Toyota Siennas come equipped with the brand's intuitive, highly-rated Entune audio system that includes navigation and Siri Eyes Free integrated with a 6.1-inch touch screen. When you opt for an upper trim of the Sienna, you and your passengers can connect to a 4G wireless hotspot that accommodates up to four devices. Android devices can stream media directly to the optional rear-seat entertainment screens. And when you need a charge, there are five USB ports spread throughout the cabin.

Want a minivan with all-wheel drive? The 2018 Toyota Sienna is the only one on the market. This makes it the only true alternative to three-row SUVs in the minivan sector. Keep in mind that all-wheel drive is currently an option only on the seven-passenger Sienna.

Last year, the Toyota Sienna was upgraded with a new engine that provides 296 horsepower--more power than any other minivan in this class. The eight-speed automatic transmission also carries over from its introduction in 2017.

Despite its potent powertrain, the 2018 Toyota Sienna also has some of the best fuel efficiency numbers among the competition. You'll get an EPA-estimated 19 city/27 highway miles per gallon.

The interior of the 2018 Toyota Sienna feels more like a Lexus, especially when you opt for upper trims featuring leather upholstery and real wood accents. The refresh includes laminated windshield and window glass in the front row for a hushed, serene cockpit. Reviewers praise the modern, attractive design and driver-focused, easily accessible layout. Tri-zone automatic climate control means those in all three rows will be comfortable regardless of the outside weather. Keyless entry also comes standard. Drivers who want even more comfort and convenience have an extensive range of features to choose from, including HID headlights, a JBL premium audio system, heated steering wheel and front seats, and a 360-degree camera system.

Another element that sets the 2018 Toyota Sienna apart from other minivans is the inclusion of a sports-oriented trim. The SE edition features distinctive front fascias, grilles, and taillight motifs. Last year, it also included special aerodynamic side skirts; these have been added to all Sienna trims for 2018. The SE also has firmer suspension than the rest of lineup for control of body roll and increased steering precision.

The 2017 Toyota Sienna received a five-star overall safety rating from the National Highway and Traffic Safety Administration and the highest rating in four out of five crash test categories from the Insurance Institute on Highway Safety. While the new model year has not yet been tested, it is expected to meet or exceed these numbers.

With more than 160 cubic feet of passenger space, the Sienna has one of the largest interiors in the minivan class. Not only does the second-row bench seat slide and recline to improve access to child safety seats, it can also be removed and stowed completely when not in use. With four LATCH child seat installation locations, this is the ideal vehicle for large families.

Reasons Not to Buy a 2018 Toyota Sienna – The Cons

Unlike most of the competition, the 2018 Toyota Sienna supports neither Apple CarPlay nor Android Auto functionality. These systems allow drivers and passengers to use smartphone apps directly on the infotainment interface.

Eco-conscious families who prefer a hybrid minivan will have to look elsewhere, as Toyota does not currently offer this option on the Sienna.

Although the Sienna is the only minivan with all-wheel drive, those who want true towing capacity and off-roading ability will likely be happier with a rugged SUV.

While the 2018 Toyota Sienna has tough competition from the likes of the Chrysler Pacifica, Honda Odyssey, and Kia Sedona, the inclusion of so many class-exclusive features makes it a unique option that will appeal to many families with SUV fatigue. The Chrysler Pacifica has a plug-in hybrid model, one of the few minivan options more efficient than the Sienna. Because the Sienna hasn't seen a full redesign since 2011, some drivers may prefer a more modern vehicle, such as the all-new Odyssey.

Overall, though, the 2018 Toyota Sienna is an outstanding minivan at an excellent value, named one of the best in the class for the money by U.S. News and World Report. Kelley Blue Book noted that it has one of the best resale values among minivans and it was named a Most Wanted Vehicle by Edmund's and a Best Overall Value by Intellichoice. Drivers are impressed by the safety, tech, and features the Sienna packs into an affordable package.

Save Money on a 2018 Toyota Sienna:
Are you Shopping for a New Vehicle? Find the Best Deals with "Free - No Hassle" Prices Quotes.