2018 Toyota Prius Pros vs Cons. Should You Buy? 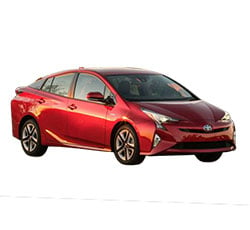 Should You Buy a 2018 Toyota Prius? Here Are Some Reasons For and Against

The Toyota Prius has, since its inception, been one of the best-selling hybrid vehicles on the market. Even though other automakers try to mimic the Prius's success, Toyota maintains its hold over the hybrid industry. The 2018 Toyota Prius, which is now in its fourth generation, has a lot of excellent qualities to offer, including its plug-in variant, the Prius Prime, which was added to the line-up in 2017.

Don't expect too many changes to be made to the Prius until 2019 since it was just revamped in 2016. Many features and specs carry over from the 2017 models to the 2018 Toyota Prius. Toyota is now building the Prius under its new platform, TNGA. This year, the biggest change is that alloy wheels now come standard across the entire line-up.

The 2018 Toyota Prius gets a fantastic fuel economy. Regardless of which trim level you choose, you will get approximately 54 mpg city and 50 mpg highway. It is hard to find something else that gets this good of a fuel economy, which, naturally, makes this a huge selling point for the Prius.

For being such a small vehicle, the interior of the 2018 Toyota Prius is surprisingly spacious. Although rear seat passengers might feel slightly cramped, anyone sitting up front will have more than enough head, shoulder, and leg space.

Since Toyota places a huge emphasis on safety, it is no wonder that the Prius has a long list of standard and optional active safety features. The Toyota Safety Sense suite comes standard on each model and includes a Pre-Collision warning, pedestrian detection, automatic high beams, and Lane-Departure alert.

All of the controls on the 2018 Toyota Prius are clearly marked and easy for any driver to use. There is no having to guess what a knob or button might do. All controls are easy to access from the driver's seat, and several important controls are mounted on the steering wheel.

Getting in and out of the vehicle is easy, especially up front. Doors swing out pretty wide, and there is enough height for people of any size to swing their legs out. Also, you won't have to worry about bumping your head on the doorframe while getting out.

6. Good Front and Side Visibility

Although rear visibility is obstructed, the roof pillars up front are slender enough to allow for a good amount of front and side visibility. The front windshield is nice and broad, and drivers won't have a problem figuring out how close their front bumper is to another car or the sidewalk.

Toyota's infotainment system is one of the better systems out there. The base Prius comes with a 6.1-inch touchscreen infotainment display, Bluetooth, USB port, voice commands, and a four-speak stereo system. Moving up in trim levels, you can get navigation, the Etune app suite, and satellite radio added into the mix, all for a rather reasonable price.

Steering on the Prius feels natural and responsive. Any driver will notice that they get a good amount of feedback, especially as to how the steering system handles difficult turns and winding roads. The smaller the tires you get, the better you will feel about making these kinds of turns.

Handling feels secure, and the Prius is quite a nimble little vehicle. While the tires lack a little bit of grip, the vehicle itself feels very balanced and steady while driving in most weather conditions.

Unfortunately, the biggest drawback to driving the 2018 Toyota Prius is that it has a rather stiff ride quality. The tires are definitely designed for getting good mileage, not for absorbing every shock in the road. Even the Prius c hatchback feels a bit more comfortable than the regular Prius, which can feel pretty rough while going over even minutely difficult road terrain.

Acceleration is not the Prius's strong point. While other vehicles in its class are able to get relatively good acceleration, the Prius is built for fuel economy, not for getting up-to-speed on the highway. If you are looking for something with a bit more get-up-and-go power, you will have to consider buying a completely different vehicle.

The Toyota Prius suffers the same issue as some of Toyota's other vehicles currently on the market. The interior looks like it was crafted from subpar materials. While nothing seems ready to break at any moment, the cloth upholstery looks like it won't hold up well over the long-run, and some of the knobs and buttons look prone to wear-and-tear as well.

Make no mistake about it, this vehicle is not quiet! Along with its stiff ride quality, you will have to endure a ton of road, wind, and engine noise when trying to get the Toyota Prius going over 55 miles per hour on the highway. The cabin seems to lack the proper insulation needed to keep some of the exterior noise out, and the engine tends to throw a fit when the vehicle is pushed to go fast.

The 2018 Hyundai Inoiq Hybrid is a top-notch competitor for the Prius with its 58 mpg fuel economy, which is absolutely best-in-class for this year. However, the Ioniq isn't as spacious and doesn't have a big plug-in range.

The 2018 Honda Civic Hybrid gets a smaller fuel economy but is a strong performer on the highway or in the city. The Civic is surprisingly spacious and is loaded with safety features.

Overall, the 2018 Toyota Prius is a very fuel-efficient car with a good amount of space. While it is going to have to amp it up in 2019 to keep competing with newer hybrid models from other automakers, the Prius is still holding onto one of the top spots for hybrid sales due to its emphasis on fuel efficiency.

Save Money on a 2018 Toyota Prius:
Are you Shopping for a New Vehicle? Find the Best Deals with "Free - No Hassle" Prices Quotes.