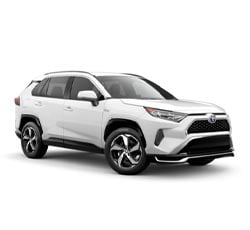 Should You Buy a 2021 Toyota RAV4 Prime? Here Are Some Reasons For and Against

The 2021 Toyota RAV4 Prime almost seems like it was brought here from the future. It's a plug-in hybrid that can run on electric or gas power, or both. It's fast, capable, and fun to drive, and on top of all that, it has convenient amenities and high-tech components. It's definitely something to consider if anyone is in the market for a high-performing hybrid vehicle that has a versatile cabin. The Prime is available in two trims, which are the SE and the higher-end XSE.

As a brand new vehicle that's part of the the 2021 Toyota lineup, the RAV4 Prime is poised to make its mark in the industry. It can be compared to the 2020 Toyota RAV4 Hybrid because they're both very efficient. However, a main difference is that the Prime can be plugged in to get some power to use for later. The Prime is faster than the Hybrid, and it has a standard eight-inch touchscreen. The Hybrid only has a standard seven-inch touchscreen and an available eight-inch one.

1. Saves Money at the Pump

With the Prime, the RAV4 has entered a new era. This SUV can run for 42 miles while exclusively using electric power. This could potentially be enough range to cover a round trip to and from work or running errands. If it's not, there's no need to worry, since the SUV can just as easily run on gasoline power.

Its estimated mileage is impressive. The RAV4 Prime gets 94 MPGe, and in the hybrid mode, it can achieve up to 40 miles per hour in the city and 36 miles per hour on the highway. With this vehicle, people will definitely be visiting the gas station a lot less.

2. Most Powerful RAV4 Ever Made

It may be hard to believe, but it took a plug-in hybrid to take the RAV4's capability to the next level. The Prime uses a 2.5-liter four-cylinder engine as well as an electric motor to send power to the wheels. Together, the two components can create 302 horsepower. Surpassing the 300-horsepower mark is a feat on its own, and to do so efficiently is just that much better.

3. Capability Is a Strength

This SUV has been built with an electronic on-demand all-wheel drive system so that it can handle tough conditions. With this type of drivetrain, power can be immediately shifted in order to maintain good traction. To put it another way, the RAV4 Prime will send power to the wheels that can use it the most. If anyone is heading out on a rugged path, there's the opportunity to switch the driving mode to "Trail." This allows the vehicle to optimize its performance given the situation.

With a ground clearance of eight inches, the Prime can clear many obstacles. The suspension system is ready to work hard, and the towing capacity is 2,500 pounds.

When people first hear the words "plug-in hybrid", they might start thinking about where and how they can charge their vehicles. Fortunately, things have become a lot more straightforward in this department. The RAV4 Prime comes with a 3.3kW onboard charger, and the accompanying charge cable can simply be plugged into a 120V or 240V outlet.

To get a full charge, it takes 12 hours. If the charging station has been upgraded with a 240V outlet, charging time is cut to 4.5 hours. The XSE comes with the option to upgrade to a 6.6kW onboard charger that can take charging time down to 2.5 hours. Many plug-in hybrid owners charge their vehicles at home each night, and others have access to public charging stations. As a sign of the times, these have been growing in number in recent years.

The RAV4 Prime has a good-sized cabin. Behind the rear seat, there is 33.5 cubic feet of storage space. Folding down the second row of seats increases cargo capacity to 69.8 cubic feet. Also remember that the rear seat is a 60/40 split bench, which means that one side can be folded down at a time if one or two rear passengers need to be accommodated.

An eight-inch touchscreen is standard on the 2021 RAV4 Prime. Thanks to Bluetooth and smartphone connectivity, people can easily access certain apps, stored files, and contact information. In addition to having one USB media port, there are four USB charge ports. The XSE is enhanced with a nine-inch touchscreen and JBL speakers, and its infotainment package can be upgraded with navigation.

7. An Extra Pair of Eyes

It can be reassuring to have someone looking out for potential problems on another person's behalf. In this case, it's not someone, but something. The RAV4 Prime has multiple sensors on its exterior, giving it the ability to watch out for other vehicles or objects. It has automated emergency braking, pedestrian detection, blind spot monitoring, and various systems designed to keep the SUV centered in a lane. Available on the XSE trim is a 360-degree camera.

In the RAV4 Prime, people will feel right at home. The dual zone automatic climate system is simple to use, and there are rear-sent vents and a dust and pollen filter. A heating element has been built into the front seats. Ventilation and rear heated seats are both options on the XSE.

9. Even the Key is Smart

This Toyota SUV has a Smart Key System. The key fob can stay in one's pocket/bag, and all it takes to unlock the doors is a touch of the door handle. Since there's push button start, the key can stay securely stored for the remainder of the trip.

18-inch, five-spoke wheels are standard on the RAV4 Prime, and 19-inch versions are found on the XSE. There are other exterior elements that stand out, such as LED projector headlights, LED daytime running lights and taillights, a bold front grille, and an available two-tone color design for the exterior paint.

1. Premium Features Come With a Cost

Everyone can agree that the RAV4 Prime has a lot of advantages. For all of its benefits, though, it does have a relatively steep price tag. The Prime SE has a starting price of $38,100, and the XSE costs over $41,000. While these numbers aren't quite as high as the costs associated with some luxury brands, the reality is that some people might have trouble with them. Toyota is a brand known, in part, for its practicality. Many customers won't feel that paying such a significant sum for a new vehicle is practical at all.

While the RAV4 comes in more than a handful of trims, the Prime only has two available trims. This can be seen as a limitation. On the one hand, the budget-conscious buyer will probably looking for a cheaper model than the Prime SE, and on the opposite side of things, the buyer with more refined tastes and a larger budget might want something even more sophisticated than the XSE.

3. Towing Capacity Could Be Improved

There are some SUVs that can tow up to 5,000 pounds, but the RAV4 Prime only has a capacity that's half of that amount. For most average drivers, this shouldn't be a problem at all, but it might matter to some people. It could be an important factor for those who want to use their SUVs to tow boats or other types of heavy cargo as they travel for work or pleasure.

If a new vehicle costs approximately $40,000, it might be assumed that it has premium materials inside its cabin, like leather seats. Notably, the RAV4 Prime doesn't even offer leather as an option. The SE has fabric seats, and the XSE's seats are covered in SofTex, which is a synthetic material. This goes along with the sporty vibe of the RAV4, but it might not satisfy some potential customers.

There aren't that many plug-in hybrid SUVs in the market, though this may change in the future. The Kia Niro PHEV and the Mitsubishi Outlander PHEV are some competitors to the RAV4 Prime.

The Kia Niro PHEV has some similar features to the Prime, but it doesn't stack up in a few ways. First, it can only travel an estimated 26 miles on electric power. Second, it has about 55 cubic feet of storage space, which is much less than what the RAV4 Prime has to offer. Finally, and perhaps most importantly, it only has a combined horsepower of 139. This really pales in comparison to the RAV4 Prime's capability, and it just puts the Niro in a completely different category than the RAV4 Prime.

It's a similar story with the Mitsubishi Outlander PHEV. Its electric-only driving range is a little over half of the Prime's range. For some commuters, a one-way trip to work would use up all the electric power. Like the Niro, the horsepower on the Outlander doesn't come close to what the Prime comes with. The Outlander is kind of like a junior version of the Prime, and when it comes to performance, a lot of people don't want to take any chances.

Taking everything into consideration, it's clear that the 2021 Toyota RAV4 Prime is going to be a hit amongst eco-conscious consumers who value performance. It's a leader in its field in terms of efficiency and practicality, and in many cases, it far surpasses other plug-in hybrids in capability. The Prime is a stylish SUV that's also rugged, and it can handle itself well no matter where it's going. The new RAV4 Prime would be a smart investment for anyone who's interested in taking advantage of new innovation in the automotive industry.


Save Money on a 2021 Toyota RAV4 Prime:
Are you Shopping for a New Vehicle? Find the Best Deals with "Free - No Hassle" Prices Quotes.