2021 Toyota GR Supra Pros vs Cons. Should You Buy? 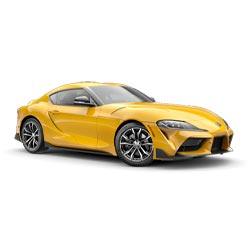 Should You Buy a 2021 Toyota GR Supra? Here Are Some Reasons For and Against

The 2021 Toyota GR Supra remains a viable option for drivers looking for a new sports car. While the new GR Supra is certainly entertaining to drive, it also gets high marks in the comfort category. While there are some premium features available, budget-minded buyers will be more than happy with what the base GR Supra brings to the table.

The arrival of a new turbo four-cylinder engine should excite many GR Supra fans. Its total output of 255 horsepower ensures a gutsy performance. When accelerating from a stop, you can race to 60 mph in roughly 5.0 seconds. Not only does this BMW-built engine improve fuel economy to a combined 28 mpg, but it also lowers the car’s MSRP. This is a key advantage for sports car lovers who’re looking to keep their expenses below $45,000.

Last year’s turbo inline-six engine was already quite potent. However, developers tweaked the 2021 model to squeeze out even more power. It now churns out a stimulating 382 horsepower, which results in quicker acceleration off the line. Whether you’re having fun on a back road or decide to hit the track, expect performance to be strong. Luckily, fuel economy does not take a dip. According to the latest EPA ratings, drivers can anticipate getting a combined 25 mpg on premium fuel.

The 2020 model was often criticized for its mediocre handling. Toyota listened to the complaints from automotive reviewers. Drivers will find a revised suspension on the 2021 Toyota GR Supra. Along with the updated suspension comes new aluminum braces for enhanced structural integrity. When you’re attacking corners at high speeds, no longer does the car feel unsettled. There’s no overlooking the latest model’s more balanced handling. An updated electric steering system also arrives for 2021. It does a better job of connecting the driver to the road.

Although the 2021 Toyota GR Supra is designed to offer affordability, it drives and feels more like a sports car that costs $100,000. Its interior quality and level of performance is superior for the class. An upgraded list of standard equipment also helps make the 2021 model an even better bang for the buck. Prices for the base GR Supra start at a reasonable $43,000. However, the more powerful six-cylinder model is priced at little more than $50,000.

When designing the new GR Supra, Toyota made sure it didn’t resemble none of its competitors. The 2021 Toyota GR Supra looks exotic. Among the car’s most striking styling cues is its double-bubble roof. Many people will also be drawn to this coupe’s aggressive front fascia. Large air vents in the grille and a six-lens headlight design help create an exciting look. On the rear, a sporty trunk lid further highlights the car’s sleek profile. Some cool paint colors are also offered, including Renaissance Red 2.0 and Refraction Blue.

To bolster the GR Supra lineup, Toyota has added a limited-production A91 Edition model. It will likely be a future collector’s item. A set of 19-inch matte black wheels help it to stand out. Designers also outfitted the GR Supra A91 Edition with a carbon fiber rear lip spoiler and carbon fiber side mirrors. The inside features a few special touches as well. Alcantara seats with blue accents give the entire cabin a more enthusiastic atmosphere.

Despite being a small sports car, the 2021 Toyota GR Supra doesn’t feel cramped on the inside. Most tall drivers won’t have any big complaints about head- and legroom. Among the car’s best attributes is its cushy seats. They maintain a plush feel throughout the day. When traveling on twisty roads, these sport seats also do a good job of keeping passengers buttoned down. Many test drivers are surprised by the quietness of the GR Supra’s cabin. This is a testament to this sports car’s build quality.

When the GR Supra was first introduced in 2020, it came standard with a 6.5-inch infotainment display. Fans of the GR Supra will be happy to learn that the 2021 model comes standard with a bigger 8.8-inch display. Drivers will love this infotainment system’s sharp graphics. It’s also easy to operate while driving. Upgraded versions of the interface feature a touchscreen with built-in navigation. Despite being called “Supra Command” by Toyota, the interface is actually a near-identical version of BMW’s top-rated iDrive infotainment system.

Some valuable driver-assist safety technologies come standard on the GR Supra. When approaching unnoticed pedestrians and vehicles, the forward collision system can automatically apply pressure to the brakes. Meanwhile, lane-keep assist helps prevent the car from drifting out of its lane. While parking sensors also come standard, blind-spot warning is optional.

It’s a good idea to invest in the GR Supra’s available blind-spot warning system. This sports car does not offer great rearward visibility. The combination of the car’s low roof and tiny windows make it difficult for drivers to see other motorists. On the interstate, drivers need to check every angle before changing lanes.

3. Not Good for the Snow

The 2021 Toyota GR Supra is strictly a rear-wheel-drive coupe. Folks who live in a snow-prone area will have trouble maintaining traction. Because the GR Supra sits so low to the ground, drivers will also be more prone to getting stuck. A good alternative to the GR Supra is the Audi TT, which features standard all-wheel drive.

4. Not a True Toyota Sports Car

Although the new GR Supra has a Toyota badge, much of the car was designed by BMW. This includes the engine, transmission, and infotainment system. In the past, the Supra was completely built by Toyota. Although the BMW Z4 is a convertible as opposed to a coupe, it shares many of the GR Supra’s mechanical parts. BMW vehicles are traditionally more expensive to maintain in the long run.

5. Could Use a Bit More Interior Storage Space

The Supra GR’s trunk provides a little more than 10.0 cubic feet of cargo space. This means drivers can easily stuff a couple of suitcases in the rear. However, there’s not much storage space inside the cabin. Even small items will be difficult to store.


How It Stacks Up Against the Competition

The new Corvette is faster than the GR Supra. However, drivers seeking more fuel savings will prefer the GR Supra. A lower MSRP gives the GR Supra yet another advantage over the Corvette. Also, keep in mind that only the GR Supra offers automatic emergency braking.

The 2021 Toyota 86 costs thousands of dollars less than the 2021 Toyota GR Supra. Some people will also appreciate the Toyota 86’s available manual transmission. However, it isn’t nearly as fast. Drivers can also expect the GR Supra to offer a more luxurious feel.

There are many upsides to the Ford Mustang GT350. A larger trunk also helps the Mustang GT350 to stand out. However, it does not offer great fuel economy. Most car shoppers also agree that the Supra has a nicer interior.

Drivers looking for a thrilling sports cars should definitely take the new 2021 Toyota GR Supra for a spin. Its all-new turbo four-cylinder engine is expected to be a popular pick. However, the more potent turbo six-cylinder engine enables the GR Supra to play with the big boys. While the GR Supra is a blast to drive in fair weather, think twice before attempting to drive on a snowy road.


Save Money on a 2021 Toyota GR Supra:
Are you Shopping for a New Vehicle? Find the Best Deals with "Free - No Hassle" Prices Quotes.