2021 Toyota Tundra Pros vs Cons. Should You Buy? 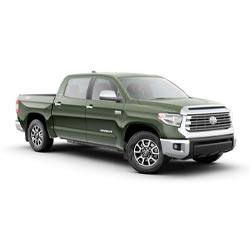 Should You Buy a 2021 Toyota Tundra? Here Are Some Reasons For and Against

Toyota has made a name for itself by building reliable, practical vehicles. With the Tundra, the company has given a solid option to its customers looking for full-size trucks. The 2021 Toyota Tundra can do quite a lot, from hauling cargo and driving over tough terrain to keeping people entertained and comfortable.

There are a few notable changes to the Tundra for the 2021 model year. As seen with several other Toyota vehicles, the Tundra now can come with the Nightshade appearance package. With this package, the Tundra gets decked out with black rims, black seats, and black exterior accents. Nightshade is only available with the Limited trim. If anyone likes the idea of enhancing the style of the Tundra but prefers the SR5 trim, there's the Trail Special Edition. This is a limited version of the SR5 that has black badging on the outside of the truck, black seats, all-terrain tires, and a storage compartment in the cargo area.

Every trim of the Toyota Tundra runs on the same engine. It's a massive, 5.7-liter V8 that packs a punch. It can provide drivers with 381 horsepower and a touch over 400 pound-feet of torque. Considering the Tundra is a pretty sizable vehicle that people are going to expect a lot out of, it's great that Toyota went with such a powerful engine. It can really give the Tundra the capability that may consumers want.

The engine that powers the Tundra, along with other high-quality components, allows it to have a towing capacity of up to 10,200 pounds. This is ideal for customers who haul trailers for either work or pleasure. Boats, animal trailers, ATVs, and more can easily be taken with people as they go on their adventures. The tow package on the Tundra comes with a hitch receiver and an integrated trailer brake controller, and there's a special Tow/Haul switch that can be activated to optimize performance while hauling heavy loads. Plus, the truck has heavy-duty brakes that can safely slow things down when needed.

Standard on the Toyota Tundra is a rear-wheel-drive system. It comes with a limited-slip differential that can increase control and stability when dealing with tricky conditions. If anyone has plans to go off-roading or knows that the truck will be used in wintry weather, it would be a smart idea to opt for the four-wheel-drive system. Power can be instantly redirected to the wheels that can use it most. 4WD comes with Active Traction Control, which can be especially useful on the roughest of roads. Having a ground clearance of 10.2 inches helps as well.

4. TRD Pro is a Bold Choice

While the standard Tundra is a force to be reckoned with, the TRD Pro trim is even more fierce. It was designed for people who take things to the extreme and want a truck with a personality that matches theirs. The truck has large FOX shocks that can handle a lot, aluminum skid plates that not only look cool but add some extra protection to the vehicle, and fog lights that enhance visibility. Even the wheels have been upgraded to BBS forged-aluminum versions. Some aesthetic features are leather-seating with TRD Pro badging and black chrome exhaust tips.

As mentioned earlier, there are few trims that really stand out. The Nightshade Edition is a new option for 2021, and the 1794 Edition is also unique. With a lot of black elements, the Nightshade Edition feels like it has a lot of attitude. It can come in a white, black, or gray metallic color, and it's sure to capture a lot of attention on the roads. The 1794 Edition takes things in a different direction, as it has a western flair. Leather seats, suede inserts, exclusive badging, and chrome highlights will certainly appeal to a certain type of buyer.

Consumers will be pleased to hear that the Tundra comes standard with Apple CarPlay and Android Auto. In addition, it's outfitted with SiriusXM Satellite Radio, Bluetooth, and Amazon Alexa. Having the ability to accept voice commands makes the infotainment system far from basic, and the truck can even act as a Wi-Fi hotspot. A seven-inch touchscreen is found on the lower trims.

Higher trims feature eight-inch touchscreens, and they can have JBL speakers to improve the sound quality. Built-in navigation can prove to be very useful, especially if people are trying to avoid any traffic congestion.

Safety has clearly been one of Toyota's priorities in recent years. Every Tundra comes with Toyota Safety Sense P. It consists of advanced cruise control so that the truck can independently adjust its speed according to how fast the vehicle in front is traveling, high beams that can automatically turn on or off, lane departure alert, and a pre-collision system that warns drivers about imminent frontal collisions and can hit the brakes if necessary. Most of the trims also come with blinds spot monitoring as well as a parking assist function that greatly reduces the likelihood of hitting objects in front of or behind the truck.

Customers will have the choice of a double cab or a CrewMax cab, with the CrewMax being the larger of the two. Second-row leg room in the double cab is 34.7 inches, and it's a much more generous 42.3 inches in the CrewMax. However, not everyone needs all of that space, so it's nice that Toyota provided some options. Depending on the trim and style of cabin selected, the Tundra can hold either five or six passengers. Note that the SR is only available with a double cab and the Platinum and 1794 Edition are only available with CrewMax cabs; all the rest of the trims can be configured in both ways.

The Tundra looks tough, thanks to an imposing front grille and its large stature. When people see the truck pull up, they'll likely have a positive impression of it, thanks to all of the stylistic details that work together. There are many available exterior elements that enhance its appearance, such as LED headlights, LED fog lights, black or chrome accents and trim, and special badging.

Just because the Tundra is meant to be be a workhorse doesn't mean it can't feel sophisticated. Certain trims of the Toyota truck have some refined elements in the cabin. The front seats can be covered in perforated leather, and they can be both heated and ventilated. Likewise, the steering wheel can be trimmed in leather. Further, a power moonroof can be fun to use when the weather allows, and the auto-dimming rearview mirror can be more useful than people might think.

Reasons Not to Buy a 2021 Toyota Tundra – The Cons

The engine on the Tundra is paired with a six-speed automatic transmission. It can get the job done, but it doesn't necessarily make the drive as fun as it could be. There are many competitors that pair their engines with ten-speed transmissions that do a noticeably better job.

15 miles per gallon is the estimated (combined) fuel efficiency of the Tundra. This is rather disappointing, especially in an industry in which innovations are being made all the time. Sure, no one would expect this truck to have excellent mileage, but having a little bit better fuel efficiency would have been great.

There are some trucks out there that have cameras placed all around the truck so that they can give the driver a full perspective of what's going on. The Tundra does have a backup camera, but so do most other vehicles being sold today. What it doesn't have is camera that lets driver see exactly what they're doing when connecting to a trailer, nor does it have a camera that can give a live feed of what's behind the truck while it's in motion.

The Tundra has been around for a long time, and in recent years, the full-size truck category has gotten pretty crowded. While the Tundra won't win in every category, it still does pretty well in certain ways.

These two trucks do pretty well against each other in a head-to-head competition, but the standard version of the Silverado doesn't compare where it matters the most. The Tundra has more horsepower and torque than its Chevy counterpart, and depending on the exact model, it may have a higher towing capacity. People shopping for full-size trucks will definitely pay attention to these factors.

If comparing the CrewMax cabin of the Tundra to the Nissan Titan with a crew cab, the Toyota has the edge in second-row leg room. For those customers who plan on carrying adults in the back seat, this could be important. Also, the Tundra has a few more trim options than the Titan does, including the amped-up TRD Pro and a few unique models that can make their presence known.

Toyota has done a really good job of inspiring brand loyalty. The 2021 Tundra will appeal to those who are familiar with how Toyota's feel, from their infotainment interface to how their cabins are organized. As a full-size truck, the Tundra can draw in a lot of customers who want to be in control of a capable, rugged, and reliable vehicle. The truck is ready to do so much, and it can do while keeping passengers safe and happy.


Save Money on a 2021 Toyota Tundra:
Are you Shopping for a New Vehicle? Find the Best Deals with "Free - No Hassle" Prices Quotes.