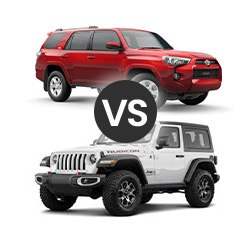 In the world of adventure-ready SUVs, few models are more suitable than the 2022 Toyota 4Runner and the 2022 Jeep Wrangler. Both of these rugged models feature a body-on-frame design, which enables drivers to confidently venture off the beaten path. Meanwhile, five-passenger seating allows the entire family to join the fun.

Only a few changes were made to the 2022 Jeep Wrangler’s lineup. Hardcore off-roaders will be interested in the SUV’s new Xtreme Recon package. It adds a suspension lift, 35-inch all-terrain tires, and a few more rugged upgrades.

Although these two SUVs may have some similar characteristics, there are some clearance differences that set them apart. For starters, only the Wrangler features a removable roof and detachable doors. In this head-to-head comparison, we’ll take a closer look at what each model brings to the table.

In contrast to the 2022 Toyota 4Runner, the 2022 Jeep Wrangler gives buyers a wide range of powertrains to pick from. Most people tend to choose the Wrangler’s standard V6 engine, which kicks out 285 horsepower. Both a six-speed manual gearbox and an eight-speed automatic transmission are offered. While the four-door Wrangler takes 7.0 seconds to hit 60 mph, the lighter two-door model clocks a 0-60 mph time of around 6.4 seconds.

Another option is the Wrangler’s turbo four-cylinder engine, which is only offered with an automatic transmission. It puts out 270 hp and a noteworthy 295 lb-ft of torque. Expect the turbo-boosted Wrangler to accelerate just a tad quicker.

A diesel engine is also available for the Wrangler, which develops a muscular 442 lb-ft of torque. Drivers can enjoy the lineup’s best efficiency without having to sacrifice much performance. Road tests show the diesel-powered Wrangler sprints to 60 mph in 7.5 seconds.

A big V8 engine is exclusively available in the limited-edition Wrangler Rubicon 392. Jeeps tunes it to push out 470 hp. This surplus of muscle translates to an especially swift 0-60 mph time of 4.2 seconds. Along with the extra muscle comes a more aggressive exhaust note.

Eco-friendly drivers will be interested in the Wrangler’s 4xe hybrid powertrain. It develops a staggering 370 hp. Owners can anticipate a 0-60 mph time of 6.1 seconds. An electric driving mode enables the SUV to be driven up to 22 miles on solely battery power.

While the 4Runner’s V6 engine has been around for quite some time, it has proven to be extremely reliable. Toyota tunes it to crank out 270 hp, which enables the 4Runner to accelerate to 60 mph in about 7.5 seconds. Like the engine, the SUV’s five-speed automatic transmission performs smoothly in all situations.

Drivers who need to tow will find the 4Runner to be more appealing. It has the ability to pull up to a 5,000-pound load. By comparison, the four-door Wrangler’s towing capacity maxes out at 3,500 pounds. Furthermore, Jeep rates the two-door Wrangler to tow only 2,000 pounds.

The 4Runner loses to the Wrangler in the fuel economy department. Don’t expect the 4Runner to deliver much better than its EPA rating of 16 mpg town/19 mpg freeway. Luckily, owners can use regular unleaded gas.

When equipped with a V6 engine, the two-door Wrangler has a top fuel economy rating of 20 mpg town/24 mpg freeway. Expect the larger 4-door version to be just a tad less efficient. Opting for the Wrangler’s turbo four-cylinder engine results in a rating of 22 mpg town/24 mpg freeway. With the ability to return up to 29 mpg on the open road, the diesel-powered Wrangler is the lineup’s most frugal option.

To no surprise, effciieny drops to 13 mpg town/17 mpg freeway with the Wrangler Rubicon 392’s mighty V8 engine. Folks who choose the 4xe hybrid powertrain can expect to average a combined 20 mpg. However, it’s important to also factor in the hybrid model’s 22-mile electric driving range.

In terms of off-road capabilities, these powerfully built SUVs are a close match. While all versions of the Wrangler come standard with a robust 4WD system, the 4Runner can be equipped with this traction-enhancing feature. Both SUVs feature a truck-based frame.

Most adventure lovers will have no complaints about the 4Runner’s ability to conquer America’s rural backcountry. Adventurous technologies, such as Crawl Control, give drivers greater confidence when traveling on challenging trails. Although the 4Runner’s TRD Off-Road trim can handle most conditions, special shock absorbers and a beefy front skid plate are found on the range-topping 4Runner TRD Pro.

At the end of the day, the Wrangler proves to be a slightly more skilled off-road performer. Its legendary Rubicon trim features heavy-duty front and rear axles. Rock rails made of high-strength steel also found on the wrangler Rubicon, which ultimately help better shield the underside from damage.

Neither SUV has a clear-cut advantage when it comes to braking. When slamming on the brakes, the 4Runner’s front end can nosedive. Although the Wrangler’s long brake pedal travel is great for off-roading, it’s not the best choice for driving on the street. However, high-performance brakes do help the powerful Wrangler Rubicon 392 to stop quicker.

The most reliable of these two SUVs is hands-down the Toyota 4Runner. For years now, it has been praised by mechanics for being extremely durable and trouble-free. When serviced regularly, this vehicle can easily last for more than 250,000 miles. Unfortunately, researchers give the Jeep Wrangler a low dependability rating. Over the past few years, there have been quite a few issues encountered by Wrangler owners.

While both SUVs come standard with a 60,000-mile powertrain warranty and a 36,000-mile bumper-to-bumper warranty, the diesel-powered Wrangler’s powertrain is protected by a 100,000-mile warranty. On the other hand, only the 4Runner receives two years of no-cost scheduled maintenance.

Although the 2022 Toyota 4Runner isn’t as nimble as a modern crossover, it still feels quite stable for a truck-based SUV. It’s especially easy to guide on the open road. Drivers who desire a greater sense of control will prefer either the 4Runner's new TRD Sport trim or the more luxurious Limited trim. Both of these 4Runner trims come equipped with a street-tuned suspension with adaptive dampers.

Don’t expect the 2022 Jeep Wrangler’s everyday handling to be as good. While the two-door Wrangler’s shorter wheelbase may come in handy when parking, this SUV begins to feel a bit clumsy on winding roads. Jeep clearly designed the Wrangler to deliver its best performance when traveling off the beaten path.

The edge in ride comfort also goes to the 4Runner. This is especially true for the previously mentioned TRD Sport and Limited trims. They do a better job of softening bumps in the road. While the Wrangler feels fine on smooth pavement, its ride turns rougher on bumpier roads. Folks who wish to improve the Wrangler’s on-road comfort should avoid trims equipped with more aggressive off-road tires.

Both of these rugged SUVs have a boxy shape, which leads to more wind noise. Nevertheless, the 4Runner’s interior still feels a bit more hushed. It does not allow as much road noise to enter the cabin. Wrangler trims equipped with a soft top are naturally louder on the inside.

While the new Wrangler provides better outward visibility than previous generations, it still ranks near the bottom of the pack in rear visibility. The 4runner’s overall visibility is a bit better. However, drivers will encounter some blind spots when looking behind.

Only the Jeep Wrangler comes equipped with a removable roof and detachable doors. These features create a more exciting drive. Passengers will love the open-air experience when traveling on a nice day. Keep in mind that removing the SUV’s doors does lower its safety profile on the street. Drivers won’t have any side mirrors to view.

The two-door Wrangler isn’t as practical for drivers who have a family. They will find the four-door Unlimited model to be a better fit. It provides 38.3 inches of rear legroom, which is actually more space than you’ll find in the back of the 4Runner.

Despite not providing as much rear head- and legroom, the 4Runner offers greater overall comfort for most families. Its cushier seats provide more under-thigh support. Some reviewers have found the Wrangler’s seats to have a rather flimsy feel, which equates to less comfort on long trips. While both SUVs can be equipped with heated front seats, only the 4Runner offers ventilated front seats.

When it comes to cargo space, the 4Runner leaps ahead of the Wrangler. There’s a whopping 47.2 cubic feet of storage space behind its second-row seats. Travelers will be able to pack the 4Runner with a lot of gear when taking an out-of-town adventure. The four-door Wrangler provides around 31.7 cubic feet of cargo space.

The 4Runner features Toyota’s straightforward Entune entertainment system, which scores points for its ease of use. Shortcut buttons further simplify the system’s operation. However, Jeep’s Uconnect infotainment system proves to be one of the best in the class. Users rave about its quick-responding touchscreen and sharp graphics.

The 2022 Toyota 4Runner earned a decent, four-star overall safety rating from the NHTSA. While most crash scores were good, it only received a three-star rating in the federal government’s front passenger-side test. Car shoppers should also be mindful of the 4Runner’s three-star rollover rating.

Although NHTSA crash scores aren’t available for the Wrangler, this SUV was evaluated by the IIHS. It only received a “Marginal” overall safety rating from this organization. According to the IIHS, the Wrangler is prone to tipping over upon striking a barrier.

Both vehicles can be equipped with a blind-spot monitor and parking sensors. However, the 4Runner goes a step further by offering a 360-degree camera system.

Prices for the 2022 Toyota 4Runner a bit steeper. Toyota lists the base 4Runner SR5 with a starting MSRP of $37,600. By comparison, the two-door Wrangler Sport starts at $29,700. Stepping up to the Wrangler's four-door body style increases the cost to around $33,200. Remember, only the Wrangler receives a standard 4WD system.

While the 4Runner SR5 may be more expensive, it does come loaded with a greater number of modern features. The two-door Wrangler features a much smaller touchscreen, which does not provide Apple CarPlay and Android Auto smartphone integration. Furthermore, manual windows and locks are found in both the two-door Wrangler and the four-door Wrangler. A standard Wi-Fi hotspot gives the base 4Runner another advantage.

When choosing between the 2022 Toyota 4Runner and the 2022 Jeep Wrangler, it boils down to what drivers desire the most. There’s no overlooking the Wrangler’s coolness factor. Its removable roof and doors will appeal to many people. Many people consider the Wrangler to be a great alternative to a convertible sports car.

The 4Runner ultimately offers a better blend of on-road comfort and ruggedness. Superior long-term reliability also gives the 4Runner a big edge over the Wrangler. However, one glaring weakness is the 4Runner's subpar fuel economy.