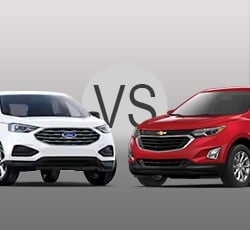 Ford versus Chevrolet is a pretty iconic rivalry in the vehicle world, particularly when it comes to pickup trucks. They both also have several offerings in the SUV segment that go head-to-head. When it comes to compact crossovers, Ford has the Escape while Chevrolet has the Equinox.

The 2020 Ford Escape is completely redesigned and has more power than in years past. Buyers can also now get a hybrid powertrain once again, an option that has been missing for a few years. The 2020 Escape, which is kicking off the vehicle's fourth generation, offers a comfortable cabin and is a very practical option.

Chevrolet redesigned the Equinox in 2018. In 2020, the diesel engine has been dropped from the lineup. On the plus side, several more driver aids now come standard on the entry-level trim. This crossover SUV has a smooth ride and a powerful engine available, making it appealing to driving enthusiasts and families alike.

At first, both SUVs may seem nearly perfect. Taking a closer look at them reveals several flaws, however. So which one is the smarter buy? This guide aims to help answer that very question.

Ford gives consumers plenty of options when it comes to the powertrain for the 2020 Escape. Standard for the entry-level S trim is a turbo 1.5L four-cylinder that generates 181-horsepower and 190 lb-ft of torque. It is paired with an eight-speed automatic transmission. The SE Sport trim goes with a hybrid setup that includes a 2.5L four-cylinder engine. These models can make 200-horsepower and go with a continuously variable transmission instead.

Both the SEL and Titanium trim levels are available with a turbo 2.0L four-cylinder engine as well. With this, drivers are looking at 250-horsepower and 280 lb-ft of torque. This engine goes back to the eight-speed automatic transmission. Ford also offers an Escape PHEV, which is a plug-in hybrid and available in three of the five trim levels.

Chevrolet keeps things a little simpler by offering only two engines for the 2020 Equinox. Like the Escape, the Equinox has a turbo 1.5L four-cylinder as its base engine. This one produces 170-horsepower and 203 lb-ft of torque. It gets a six-speed automatic transmission. The optional engine is a turbo 2.0L four-cylinder making 252-horsepower and 260 lb-ft of torque and works with a nine-speed automatic.

All-wheel drive is standard on any model of the Escape with the turbo 2.0L engine. The Equinox, on the other hand, can have AWD on any trim except the entry-level one, no matter which one of the engines it has. When properly equipped, both of these SUVs are capable of towing up to 3,500 pounds.

Fuel economy numbers for the Ford Escape look excellent. The base engine will have drivers getting approximately 27mpg in the city and 33mpg on the highway. Any model with the 2.0L engine and AWD is estimated to get 23mpg city and 31mpg highway, which is still pretty impressive. As for the SE Sport, it provides 44mpg city and 37mpg highway for drivers.

The Equinox offers similar numbers when it comes to fuel efficiency for its base engine. Drivers can expect 26mp while in the city and 31mpg on the highway. The turbocharged 2.0L option for the Equinox lags behind the Escape, getting only 22mpg city and 29mpg highway. There is no hybrid version of the 2020 Equinox.

J.D. Power estimates how reliable a vehicle will be going forward. Out of five stars, 2.5 would be considered average. The 2020 Escape gets an astounding 4.5 stars. Believe it or not, the Equinox does manage to beat that, getting a perfect score of five out of five stars.

The warranties for both of these vehicles are nothing to get excited over. This is unlikely to deter anyone, however, thanks to the great predicted reliability scores. Both give buyers three years or 36,000 miles for basic coverage along with five years or 60,000 miles for the powertrain.

Both of these SUVs have two rows and are designed to seat up to five. Taller drivers and passengers may prefer the Escape over the Equinox due to its more generous legroom. In the front row, the Escape has 42.4-inches while the Equinox has just 40.9. The Escape also has an extra inch of legroom in the back, with 39.9-inches compared to the Equinox's 38.9-inches.

The Escape also wins when it comes to the head, shoulder, and hip room. This is true for both rows of seating. The only exception is the front headroom, with both vehicles measuring in at exactly 40-inches. Visibility will be no issue for the driver in either of these crossover SUVs.

Cargo area is another category that the newly redesigned Escape excels in. Behind the second-row of seats, there are 33.5 cubic feet. Folding down that row means having 65.4 cubic feet. These are great numbers for the compact SUV class.

Unfortunately, the Equinox cannot keep up. It offers only 29.9 cubic feet with the second-row up. Its maximum cargo capacity looks a little better, sitting at 63.9 cubic feet. Any families that plan on taking a road trip with a decent amount of luggage will prefer the Escape for that extra room when the second-row is up.

When it comes to parking and maneuvering, both the Equinox and the Escape have their perks. The Equinox is the longer of the two, measuring in at 183.1-inches while the Escape is only 180.5-inches. At the same time, the Escape is about two inches wider and an inch taller than the Equinox.

Technology features help the Equinox get back into the running as the better compact crossover SUV. The Escape's standard equipment list only consists of a 4.2-inch touchscreen, one USB port, and the basic SYNC infotainment system. Drivers do not need to go far up the trim ladder to get more, however. The SE model and up have an 8-inch touchscreen and the SYNC 3 system, which includes both Apple CarPlay and Android Auto.

The Equinox, on the other hand, comes standard with smartphone integration capability as well as a 7-inch touchscreen. It also has two USB ports and a WiFi hotspot. An 8-inch touchscreen is available on the LT as part of a package and standard for the Premier trim.

Both of these vehicles offer similar available tech upgrades. Either can be had with HD and satellite radio, for example. The Equinox's upgraded audio system is a 7-speaker setup from Bose. For the Escape, Ford goes with a 10-speaker system by Bang & Olufsen.

The Escape and Equinox both offer a sporty experience when behind the wheel. Drivers should be aware that the turning radius for the Equinox is quite wide, however. While they both do a good job of insulating the cabin, the Escape does a particularly good job of absorbing impacts.

Safety features and scores are not going to be very helpful when deciding between the 2020 Escape and Equinox. Both received five out of five stars in crash testing conducted by the National Highway Traffic Safety Administration. They both got five stars for front and side crashes and four stars in rollover testing.

Similarly, they were both named top safety picks by the Insurance Institute for Highway Safety. They test vehicles in six main areas. Both the Escape and Equinox got a score of "Good" across the board.

The IIHS also evaluates how well a vehicle's crash avoidance technology works. Both vehicles got the top "Superior" score when it came to vehicle-to-vehicle crashes. The Escape also got "Superior" for frontal vehicle-to-pedestrian crashes. As for the Equinox, it got a score of "Advanced."

The list for the Equinox is very similar when it comes to standard driver aids. It adds lane departure warning and a rear-seat reminder. What it lacks, however, is the blind-spot monitoring with rear cross-traffic alert. This is an available feature for the Equinox rather than standard.

Speaking of available features, both the Escape and the Equinox offer rear parking sensors and adaptive cruise control. The Escape is also available with evasive steering assist, a head-up display, and a sophisticated parallel and perpendicular park assist system. For the Equinox, available features include a surround-view camera system and a safety alert seat.

Buyers can bring home the 2020 Equinox for less than the 2020 Escape. The starting price for the entry-level Equinox is $23,800, a number that would be considered average for the class. As for the Escape, it is going to cost buyers at least $24,885, a number that is slightly higher than many rivals.

Those who are looking for a fully-loaded vehicle will also prefer an Equinox. It's top trim, known as the Premier, starts at $31,400. The top-of-the-line Titanium trim level of the Escape starts out at $33,400.

So the Equinox costs less upfront, but is the same true as time goes on? To determine this, buyers need to consider both depreciation and out-of-pocket expenses for both SUVs. These expenses cover things such as fuel, taxes, repairs, maintenance, and more.

Now for the Equinox. It is estimated to cost drivers just over $19,000 in out-of-pocket expenses. This higher number is partially due to the Escape offering better fuel efficiency. It is also estimated to lose just over $17,000 in value. In total, the 2020 Equinox will cost buyers about $36,000 in their first five years of ownership.

When looking at both initial price and cost-to-own numbers, the Escape and Equinox actually appear quite equal. When it comes to the best value, however, the Equinox has the edge, mostly due to it coming standard with Android Auto and Apple CarPlay as well as a larger touchscreen.

In many ways, the 2020 Ford Escape and 2020 Chevrolet Equinox are evenly matched. Unless one has their heart set on a hybrid, the engine options are not useful when picking. They both also have amazing predicted reliability and crash testing scores.

Buyers who are interested in sticking with the entry-level trims and are more concerned about upfront costs will likely prefer the Equinox. Although it lags behind the Escape in many ways, it is not by much. Families, however, may find themselves more comfortable in the Escape. It has more passenger and cargo space and is slightly more fuel-efficient. Buyers should be sure to skip over the entry-level S trim if they go with this route, however, to get the upgraded tech features.

Save Money on a 2020 Ford Escape:
Are you Shopping for a New Vehicle? Find the Best Deals with "Free - No Hassle" Prices Quotes.