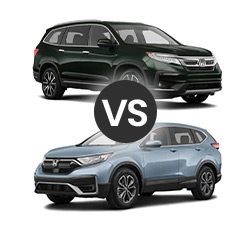 The Honda Pilot and CR-V are two reliable, capable SUVs. They can be perfect for those looking for models with versatile cabins and spacious interiors. The 2021 versions of these SUVs have great amenities, to include modern infotainment systems and driver-assist technology.

People might have a hard time choosing between these vehicles since they do have many things in common. After reading this detailed overview, though, potential customers should have a much better idea of which Honda SUV would be the more strategic choice.

First of all, customers need to know that the Pilot is a three-row SUV. The Honda CR-V only has two rows. This is probably going to be the biggest factor as potential buyers choose their SUVs.

Of course, the reason why the Pilot needs so much interior room is so that it can accommodate all of those seats. It can fit up to eight passengers if equipped with a bench seat in the middle row. Some versions of the Pilot have captain's chairs instead of that bench, and in this case, there would be accommodations for seven people.

The CR-V has a generous amount of leg room for a two-row SUV, which is probably one reason why it's so popular. It gives its driver and front passenger 41.3 inches of leg room, and in the back row, there is 40.4 inches of leg room. Adults would definitely be comfortable riding in the back of this SUV, even if there were three of them sitting together.

In the Pilot, there's still a lot of space, but there are more people to share all of that room. Leg room in the first, second, and third rows of the Honda Pilot is 40.9, 38.4, and 31.9 inches, respectively. Since that third row is kind of cramped, it's not going to be a place where taller passengers are going to want to spend a lot of time.

Cargo capacity in both vehicles is impressive. The Honda CR-V has a rear cargo area that has a volume of 39.2 cubic feet, and that can expand to about 75 cubic feet by lowering the second row.

In the Pilot, the dedicated cargo area behind the third row of seats is somewhat small, having a volume of 16.5 cubic feet. Since the second and third rows can both be quickly folded down, it's easy to create more storage space. Total cargo capacity is 83.9 cubic feet.

The Honda Pilot and CR-V share many stylistic details. They have the same rounded edges and similar front grilles. LED headlights and rear privacy glass are standard on the Pilot, whereas they're standard on all trims of the CR-V expect for the entry-level trim. Both trims can have power tailgates, power moonroofs, LED fog lights, and heated side mirrors. Those side mirrors on the Pilot have a reverse tilt-down function that can be useful when backing up into parking spots.

Those looking for capable SUVs will probably be happy with either SUV. They're both athletic, though the Pilot is significantly stronger than the CR-V is. In the Pilot, there's a V6 engine with a displacement of 3.5 liters. With this amount of size, it's able to make a respectable amount of power. It comes with 280 horsepower and 262 pound-feet of torque, and it can tow up to 5,000 pounds.

Two engines are available with the Honda CR-V, and neither one is at the same level as the Pilot's engine. They give the CR-V a towing capacity of only 1,500 pounds.

The first CR-V engine is part of a traditional powertrain. It's a 1.5-liter turbocharged engine. It'll give drivers 190 horsepower and 179 pound-feet of torque.

The other option is to get a hybrid CR-V. The hybrid powertrain uses an electric motor in conjunction with a 2.0-liter engine. Together, they make 212 horsepower. The hybrid CR-V comes standard with all-wheel drive, and traditional CR-Vs can have either all-wheel or front-wheel drive.

With the Pilot, the first five trims can have all-wheel or front-wheel drivetrains. The top two trims, which are the Elite and Black Edition, are only available as all-wheel-drive SUVs.

If a Pilot has all-wheel drive, it'll have Intelligent Traction Management and three different settings. Drivers can select from Snow, Sand, or Mud modes in order to optimize their performance as they deal with tough conditions. Even most of the front-wheel-drive Pilots have a Snow mode, just in case someone ever has to handle slippery roads in the winter.

Honda has given the two SUVs different types of transmissions. The CR-V has a continuously variable transmission. This transmission has sport mode, which can make the vehicle feel much more aggressive.

In the Pilot, there's a nine-speed automatic transmission. It comes with paddle shifters to give people manual control over shifting. Some people use these shifters frequently, others may use them only on occasion to try something different, and quite honestly, many drivers may never use them.

As one would expect, the hybrid version of the CR-V does very well in this regard. It's able to achieve 40/35 (city/highway) miles per gallon. This makes it an enticing choice that will result in long-term savings at the gas station.

There can be plenty of features in the cabin of these SUVS that make them more comfortable. Most Pilots and CR-Vs have heated front seats to keep people cozy in the colder months. The Pilot has a trim with heated and ventilated front seats, and it has two trims with heated second-row seats. On cold days and nights, this is something that's sure to be appreciated by passengers. In the CR-V, there isn't an option to get ventilated seats, nor can this vehicle have heated second-row seats.

In both models, leather upholstery is available, as is a memory system for the driver's seat and side mirrors. The memory function can be useful if multiple people will be driving the same vehicle.

In several ways, the Pilot has more to offer than the CR-V does. For instance, it comes standard with dual-zone automatic climate control and push-button start. Many of its trims have leather-wrapped steering wheels, sunshades that have been integrated into the second-row doors, and automatic-dimming rearview mirrors that can do a great job of reducing distracting glare at night. These features can be found in the CR-V, with the exception of the sunshades, but only on the higher trims. Plus, the Pilot has ambient LED lighting and illuminated drink holders as available features. Sure, these elements might not be very important in the overall picture, but they can play a role in making the Pilot feel more sophisticated.

With both SUVs, the entry-level trims lack smartphone compatibility. For some reason, Honda has left Apple CarPlay and Android Auto out of the list of standard features for the Pilot LX and CR-V LX. These trims do, however, have five-inch LCD screens and Bluetooth. The CR-V LX has Pandora radio compatibility, too.

The Touring trim of the CR-V has navigation, wireless charging, and a sound system with nine speakers. This is a definite upgrade over the four-, six-, or eight-speaker sound systems found in the other trims.

With the Pilot, many trims have seven speakers. Select trims have wireless charging to make it much more convenient to keep devices fully charged while traveling. The top three trims of the Pilot all have integrated navigation, Wi-Fi capability, and ten-speaker sound systems. With multi-zone audio, certain passengers can choose to lower their volume in case they would prefer to have a quiet ride or want to listen to something other than what the driver has chosen. As a bonus, these trims have an in-vehicle PA system through which the driver can broadcast his/her voice through the speakers in order for people in the back to hear.

The top three trims of the Pilot also have rear entertainment systems. This comes with a 10.2-inch screen through which TV shows and videos can be played. A Blu-Ray player is included with this package, and the screen is advanced enough to allow the use of certain streaming apps. This technology feature is something that households don't necessarily need but can certainly appreciate, especially if they have young children who they want to keep entertained on long road trips.

These vehicles have very similar safety packages. They both have Honda Sensing Technologies, which means that they can keep an eye out for potential problems and be proactive about keeping people safe. This involves warning drivers about various issues as well as taking corrective measures on their own.

For example, the Pilot and CR-V come standard with forward collision warning and automatic emergency braking. If it seems like one of the Honda SUVs is about to hit the object in front of it, it'll send out an alert and help a driver slow down. It can do something similar if it's veering out of a lane. In this case, it would correct its steering in a gentle, controlled manner. It uses sensors that can "see" the lane markings so that it knows where to position itself.

Further, these SUVs have adaptive cruise control and automatic high beams. Blind spot and rear cross-traffic monitoring are two components found on all of the trims except the entry-level ones. Unfortunately, neither model has a 360-degree camera or a head-up display.

Overall, the Honda Pilot is the more premium model. Helping it stand out as a sophisticated SUV is the fact that it has seven total trims, three of which are quite upscale. In contrast, the Honda CR-V has a more practical feel to it. It does have four available trims, the highest of which is the Touring. With the Pilot, the Touring is topped by the Elite and Black Edition trims which have even more stylistic and luxurious features.

Customers will have to be prepared to pay more for the Pilot. Its base trim costs $32,550. In comparison, the lowest trim of the Honda CR-V costs only $25,350. This is a significant difference that will make potential buyers really think hard about their decisions.

On the higher end, the CR-V's Touring trim costs $33,650. Even with all of its high-end components, it's just a bit more expensive than the cheapest Pilot trim. As mentioned, there are a number of very refined Pilot trims. The Touring costs $43,220, the Elite costs $48,720, and the Black Edition has the most to offer but a price ($50,220) that may be difficult for some to afford.

In the end, it will likely come down to power, size, and affordability. The Pilot is much more powerful and more spacious, and the fact that it has three rows of seating will make it hard for certain customers to pass up. The CR-V still has a good amount of space and room for five passengers, and because it's available as a hybrid, it'll attract some attention from eco-minded consumers. The reasonable pricing structure of the CR-V will also make it appeal to many buyers.