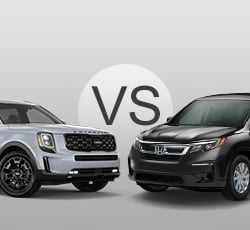 2021 Pilot vs Telluride - How do they stack up? Which is Better?

The three-row Honda Pilot and Kia Telluride can catch the eye of potential customers who are looking for full-size SUVs. They have a generous amount of space in their cabins, and they have many nice amenities that people will find convenient. Honda and Kia have done a good job of ensuring that these models have capable engines, just in case drivers have plans to go off-roading. Since the two models are fairly similar, it could be difficult to determine which would be better. This overview should provide prospective buyers with the information they need to make strategic decisions.

The respective companies have kept things pretty straightforward when it comes to the powertrains in these SUVs. There's only one Honda Pilot engine, and the same is true for the Kia Telluride.

Both models use V6 engines. In the Honda Pilot, the engine has a displacement of 3.5 liters. It gives the vehicle 280 horsepower and 262 pound-feet of torque. In the Kia Telluride, the engine is a bit larger with a displacement of 3.8 liters. As expected from its greater size, it has slightly more horsepower (291) than the Pilot's engine does. Its torque, though, is the same as what's found in the Honda. Towing capacity is 5,000 pounds in each of the SUVs.

All-wheel drive is an option with both vehicles. In most Honda models, there is Intelligent Traction Management so that drivers can choose various modes to enhance their performance in certain situations. The available modes are snow, sand, and mud. With the Telluride, there's a specific snow mode that comes with the on-demand all-wheel drivetrain. In particularly challenging conditions, drivers can lock the AWD system in place.

The Telluride has other drive modes that are available regardless of whether the vehicle has all-wheel drive. The four drive modes are Comfort, Eco, Sport, and Smart. People can choose whether to enhance efficiency, improve responsiveness, or let the vehicle make the proper adjustments to provide a smooth ride. The Pilot doesn't have all of of those modes, but it does have an Eco Assist function as well as Idle Stop, which is a feature that temporarily turns off the engine when the vehicle is stopped for more than a few seconds.

Each vehicle comes with its own features that make it easier to drive. The Honda Pilot has multiple mechanisms that people will appreciate. First, it has Active Noise Cancellation to make the cabin more peaceful. Plus, nearly all of its trims have remote engine start. This can be useful when someone wants to warm up a vehicle in the winter or cool things down in the summer. All trims have something called Hill Start Assist, and this prevents the vehicle from rolling backwards after being stopped on a slope when facing uphill.

One useful component that can come with the Kia Telluride is a self-leveling rear suspension. It comes in handy when the rear of the vehicle is loaded down with heavy items. It can make the necessary adjustments so that the vehicle can be more balanced and drive more smoothly.

The size of these vehicles can play a role in how easy they are to drive. The Honda measures 196.5 inches long, and it's a bit wider than average with a width of 78.6 inches. It sits 7.3 inches off the ground. The Telluride's exterior measurements are almost identical to those of the Pilot. The exception is that it sits eight inches off the ground, and this could make it more ideal for driving on uneven terrain. In situation, there might be a chance of scraping the bottom of the vehicle against the road or trail surface, so every inch can help prevent this from happening.

Cargo room can affect what people can do with their SUVs, as some customers might need the space for bikes, skis, or work equipment. In the Honda Pilot, there is around 17 cubic feet of space behind all of the seats. If those seats are folded down, cargo capacity increases to about 84 cubic feet. The Telluride has a little more room to accommodate cargo. It has a cargo area in the back that has a volume of approximately 21 cubic feet. There could be around 87 cubic feet of total space when all the rear seats have been lowered.

If someone spends a lot of time in his or her vehicle, it can be important to have a solid infotainment system. When comparing the technology packages offered in the Pilot and Telluride, the Telluride comes out as the winner. That's because it comes standard with an eight-inch touchscreen with smartphone compatibility, and it can have a 10.25-inch touchscreen with integrated navigation and a ten-speaker Harman Kardon audio system. The entry-level trim of the Pilot only has a five-inch LCD screen with Bluetooth. On all of the other trims, there are eight-inch touchscreens with Apple CarPlay and Android Auto. Navigation is available, as is a 10-speaker sound system.

However, this information doesn't tell the whole story as it relates to the technology package. The Honda can come with an in-vehicle intercom to improve communication, multi-zone audio so everyone can set their preferred volume, wireless charging, and Wi-Fi capability. Drivers could also set up their cabins with rear-seat entertainment systems that can play Blu-ray discs and support certain types of streaming.

Some of those features are available in the Kia Telluride. It also has wireless charging in some of its trims, and its intercom is called "Driver Talk." It has something similar to the multi-zone audio program that the Honda has; the Telluride's system is called Quiet Mode, and it can reduce the volume in the back seats in case those people want to rest or use their own devices.

There are several mechanisms in both vehicles that make them safer. Of course, they have multiple air bags, sturdy and solid frames, and three-point seatbelts that can hopefully keep everyone in place in the event of an accident. Beyond these standard components, there are driver-assist technologies that can actively work to monitor the situation, warn drivers about problems, and potentially take corrective measures.

The Pilot has a Honda Sensing suite of safety features. It consists of a few different types of monitors and mitigation systems that can prevent dangerous situations. For example, these SUVs can warn drivers when they're approaching other vehicles too quickly or drifting out of their lanes. If so, they can slow themselves down and/or correct their steering. Automatic high beams and adaptive cruise control are also standard. Most, but not all, of the trims have blind spot and rear cross traffic monitoring.

Likewise, the Kia Telluride has many driver-assist systems that people can have rely on. The Telluride can sense potential forward collisions, and it will know when it's drifting out of a lane. In certain situations, it can alert drivers and help them avoid certain types of incidents. Notably, blind spot and rear cross-traffic alert are both standard. The Telluride has more systems as well, including driver attention warning, parking distance warning, and a system that lets passengers know when it's safe to open up their doors and exit the vehicle.

When examining what the lower trims of each model have to offer, there are many similarities and a few key differences. As mentioned earlier, the base model of the Honda Pilot doesn't have a large touchscreen, nor does it have Apple CarPlay/Android Auto. This is going to put it at a major disadvantage when compared with the Telluride. However, it does have tri-zone climate control. In comparison, the base model of the Kia has a manual climate control system. Another element that's standard on the Telluride is synthetic leather upholstery rather than cloth.

The Honda Pilot has been around for a long time, and in a way, it shows. It doesn't have a 360-degree camera system, nor does it have an available head-up display like the Palisade does. What it does have is quite nice, though. The Pilot treats people to a comfortable and spacious cabin, plenty of technology (with the exception of the base model), and convenient amenities. Most of its trims have leather seats, power tailgates, and LED fog lights, and don't forget its available rear-seat entertainment system.

The Telluride was only recently released, and it's already made a name for itself. It offers some more interior space than the Pilot does, and it has a nicer infotainment package. It starts out with synthetic leather seats rather than fabric ones like the Pilot has, and it can look very striking with its full array of available LED lights.

The choice of whether to get a new Pilot or a Telluride comes down to personal preference since there's little that separates them in terms of performance. The Telluride has a slightly more modern vibe to it, and it does have the better technology. The Pilot, on the other hand, looks a little more ordinary from the exterior. That should work for many drivers, and its interior can be a family's dream with its different entertainment options.