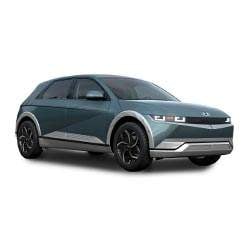 Compare the 2022 Hyundai IONIQ 5 Trims - SE vs SEL and Limited. What is the difference between them?

The all-new Hyundai IONIQ 5 is a model that's really going to attract a lot of attention. That's because it's an all-electric hatchback that's safe, capable, and stylish. As one would expect from an electric vehicle, it has quite a few high-tech components. It also has a youthful vibe that makes it seem more unique.

Hyundai makes three trims of the IONIQ 5, and each trim can either come with all-wheel or rear-wheel drive. Rear-wheel-drive versions have one motor that gives them 225 horsepower and 258 pound-feet of torque. This is already plenty of capability, but all-wheel-drive versions have dual motors which give them more traction and more overall power. They can make up to 320 horsepower and 446 pound-feet of torque.

These numbers indicate pretty clearly that the IONIQ 5 is a responsive vehicle that can handle itself well. This type of power power makes this Hyundai competitive in a market that seems to be almost saturated with crossovers, hatchbacks, and SUVs.

The range on the IONIQ 5 can be impressive. All-wheel-drive IONIQ 5s can travel up to 256 miles before having to recharge, and rear-wheel versions have an estimated range of 303 miles. This should hopefully put to rest any concerns about the practicality of this electric vehicle.

Since this Hyundai is compatible with DC quick chargers, it can be convenient to extend the range when someone is away from home. Going from a 10% to an 80% charge could take only 18 minutes if an 800-volt system is being used. On a 240-volt outlet, which could be installed at someone's house, getting a full charge takes less than seven hours.

Aside from all of this, the IONIQ 5 provides ample interior space. It comes with nearly 40 inches of rear-seat leg room, and its total cargo capacity, when the rear seats have been folded down, is almost 60 cubic feet.

Now that most of the basics of the IONIQ 5 have been reviewed, this overview can go into detail regarding the differences between the three trims.

Compare the SE vs SEL Trim Levels. What is the difference?

These two trims both look quite modern with their sculpted frames and narrow front lights. While the SE has LED Daytime Running Lights and LED headlights, it does not have premium LED front accent lighting like the SEL does. In addition, the SEL has heated and power-folding side mirrors. On the SE, the mirrors are heated, but they don't have the power-folding function.

The last exterior difference between the SE and the SEL has to do with their liftgates. On the SE, there's a standard liftgate. In contrast, the SEL has a more advanced one. Its height can be adjusted, and this can be helpful if someone is parking in a garage with low clearance.

More importantly, this liftgate can be opened in a hands-free manner. As long as the key fob is in close proximity, someone just has to kick his or her foot underneath the sensor under the liftgate. Doing so will result in the liftgate opening on its own. People tend to appreciate this type of opening mechanisms when their hands are full.

Both trims have automatic headlights and automatic high beams, and they have LED taillights. Their rear spoilers make them look more athletic, and the door handles are somewhat unique. Usually, they sit flush with the doors. When someone touches the handle or presses the unlock both on the key fob, the handles will pop out. Then, a handle can be pulled to open one of the Hyundai's doors. They'll retract on their own. In addition to giving the vehicle a more futuristic appearance, they can reduce drag when they're flush with the doors.

More differences can be found on the inside of the cabins of the SE and SEL. Perhaps most notably, the two trims have different seating material. On the SE, there are stain-resistant cloth seats. The SEL, in comparison, has H-Tex leatherette material.

Further, the SEL has HVAC vents in the second row, and it has a heated steering wheel and ambient lighting. That type of lighting offers a choice of 64 colors, so people can play around with the colors and choose something that fits their current mood. The SEL also has an auto-dimming rearview mirror that has HomeLink technology, allowing it to act as a garage door opener.

The only distinction between the technology packages on the SE and SEL is that the SEL comes with wireless charging. Many newer smartphones can be charged wirelessly, and it can be easier to quickly place a phone on a charging pad than to plug it in to a charging port with a cord. To keep other devices charged, passengers can use one of the four USB charging ports. Two are located in the second row, and two are located up front.

Both trims are fortunate to have a huge 12.3-inch touchscreen and another 12.3-inch digital instrument cluster. They're placed side-by-side, creating a digital dashboard that gives drivers access to so much information. The touchscreen comes standard with navigation, which is a nice bonus feature.

It's actually kind of difficult to improve upon the safety package in the SE. It offers so much, including a highway driving assist feature, smart cruise control, lane keeping assist, and automatic emergency braking. It comes with pedestrian and cyclist detection as well as junction turning assistance. Plus, the SE has blind-spot collision-avoidance assist, rear cross-traffic collision-avoidance assist, and a parking distance warning system that works when the Hyundai is in reverse.

On the SEL, Hyundai has managed to squeeze in a few more elements. First, the parking distance warning system works when the IONIQ 5 is backing up and moving forward. Additionally, the forward collision-avoidance assist system is enhanced with evasive steering assist and the ability to help avoid certain types of accidents when changing lanes. Finally, the highway driving assist program on the SEL is more comprehensive. The SEL can keep itself centered in a lane and traveling at the right speeds based on highway data and what the leading vehicle is doing.

Compare the SEL vs Limited Trims. What is the difference?

The Limited looks very similar to the SEL from the exterior, but it has some notable upgrades. Upon closer inspection, a potential customer would likely notice the Limited's premiums side sills and glass-black accents. The Limited is the only trim that has windshield wipers that can turn on automatically when it starts raining. They can turn themselves off when appropriate.

Nearly all trims of the Hyundai IONIQ 5 ride on 19-inch alloy whees. The exception is the all-wheel-drive version of the Limited. It gets to have 20-inch alloy wheels.

This top-of-the-line trim has been upgraded in another way. Thanks to the remote smart park assist program, it has the ability to maneuver itself into a parallel or perpendicular parking spot. The driver can put the vehicle in a position that's near a parking spot, get out of the car, push a button on the key fob, and let the Hyundai take care of the rest. This program might not be necessary, but there's no doubt that it's an impressive ability.

Along with the smart parking program, the Limited has more monitoring systems. It comes with a surround view monitor, in contrast to the regular rearview monitor that the SEL and SE have. It also has a blind-spot view monitor so that drivers can actually see the vehicles that they wouldn't otherwise be easily able to identify.

One other safety upgrade found on the Limited trim is reverse automatic braking. It works when the vehicle is traveling at slow speeds, such as when getting in and out of parking spots. If it seems like the Hyundai is about to back up into an object, then pressure can automatically be applied to the brakes to hopefully prevent a collision.

The interior of the Limited has been enhanced as well. While it has the same type of leatherette seating material that the SEL does, the Limited has heated and ventilated front seats. Its driver's seat has a memory system, and it has a relaxation function. When that relaxation function is engaged, the seatback reclines pretty dramatically and the leg support extends out. Someone can take a power nap in this position or just get some rest while the vehicle is charging.

The Limited feels more open than the other trims since it has a Vision Roof. This type of roof consists of one large glass panel. It lets in more natural light and helps passengers connect with nature, and it adds sophistication to the cabin.

In terms of technology, the Limited offers the most out of the three trims. Instead of the regular stereo system, it has a premium system with Bose speakers, and it features a heads-up display. This display is projected right onto the windshield in front of the driver. It can show important information, such as the speed limit and any safety warnings.

Another component that's only included on the Limited is something called Hyundai Digital Key. This gives people the ability to program their smartphones to act as key fobs. This way, someone can go off on a hike or bike ride, for example, and only take a phone with them. When the activity is over, the person can simply walk up to the vehicle (with the phone in their hand or pocket), and the vehicle will be ready to unlock itself. Push-button start can be ready to engage, too.

Finally, there's one other thing that the Limited has. It has two vehicle-to-load (V2L) ports. One is at the charging port on the outside of the vehicle, and the other is under the rear seats. With a converter, this port can be used to charge certain types of electrical equipment. A computer, an electric kettle, an electric scooter are some of the types of items that can be charged with these ports. The other trims do have V2L ports, but they only have the exterior ports.

It can be a tough decision deciding which 2022 Hyundai IONIQ 5 to get. This car's starting price is about $43,500, so it's not exactly a budget-friendly model. The mid-level SEL costs approximately $46,000, and the high-end Limited has a price tag that's a little more than $50,000. Obviously, budget will play a role in the decision-making process.

If someone can afford the higher cost of the Limited, it would be an excellent choice. It has everything a modern consumer might want, including heated and ventilated front seats, more advanced safety components, and the panoramic sunroof.

The reality, though, is that many customers would prefer to keep their costs under the $50,000 mark. If this is the case, then the SE might be the smartest option. It has double screens and several convenient amenities like dual-zone climate control, a power-adjustable drivers's seat, and integrated navigation. No, it doesn't have wireless charging or leatherette seating material, but some people will feel that these aren't necessary. The SE is very well-equipped in areas that electric-vehicle customers will care about, and that includes the areas of performance, technology, and safety.