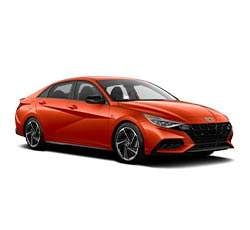 Compare the 2022 Hyundai Elantra Trims - SE vs SEL, N Line and Limited. What is the difference between them?

For those who need sedans that are budget friendly, the 2022 Hyundai Elantra would be an ideal choice. Hyundai has designed this car to be modern and stylish, while also keeping it affordable. The SE comes in under $20,000, and this can be hard to do given all the costs that go into making vehicles. The SEL, N Line, and Limited are the other trims in the lineup, and while they're not quite as cheap as the SE is, they're very competitively priced.

As a fairly basic car, the Elantra isn't necessarily going to win any races. It still manages to have an athletic look, thanks to its sculpted exterior and wide front grille. Hyundai has given it plenty of high-tech features, betting on the fact that technology will be a major selling point. This is likely to ring true in 2022, and the Elantra may offer everything that certain buyers will want.

Compare the SE vs SEL Trims. What is the difference?

These two trims run on 2.0-liter, four-cylinder engines. They have 147 horsepower and 132 pound-feet of torque. This isn't anything to get too excited about, but it's a decent amount of power, especially for a smaller vehicle. Front-wheel drive is standard, and the two trims both use Smartstream intelligent variable transmissions.

On the outside of both trims are LED Daytime Running Lights and a chrome front grille. They have body-colored door handles and side mirrors. With the SEL, there's the option to get chrome window trim, a dark chrome front grille, and LED rear taillights. The SEL's side mirrors don't come standard with heating elements or turn signal indicators, but they're an option.

Another option on the SEL is a power sunroof. This is a feature that some people really love, and if anyone is specifically looking for one, then it's nice to know that it can be put into the SEL.

The two trims have cloth seats and manually adjustable front seats. A power-adjustable driver's seat is available with the SEL, as are heated front seats. While the SE has a manual air conditioning system, the SEL gets upgraded with dual automatic climate control. Further, it has proximity key entry instead of remote keyless entry like the SE has, and the SEL has push button start, too. Some other convenient things found in the SEL, but not on the SE, are a one-touch auto-up driver's window and illuminated vanity mirrors.

From a technology standpoint, the SE is pretty attractive. That's because it comes with an eight-inch high-resolution touchscreen, Android Auto, Apple CarPlay, Bluetooth, HD radio, and voice recognition. The steering wheel has controls mounted on it as well, in case people want to keep their hands on the wheel while making adjustments to the infotainment system. Behind the steering wheel is a 4.2-inch color gauge cluster. On the SEL, that gauge cluster can be upgraded to one that measures 10.25 inches. This just makes it easier to see vehicle information when driving.

Another factor is that SiriusXM is standard on the SEL. This may be a big selling point for some people who like how many radio stations SiriusXM offers.

If anyone isn't familiar with this kind of terminology, this basically means that the Elantra can correct its steering and/or braking if necessary. For instance, if someone is backing out of a spot, changing lanes, or approaching another car too quickly when it's not safe to, then the car will send out a warning to the driver. It also has the ability to hit the brakes or adjust steering to avoid hitting an object, and it can take action if the driver doesn't have a chance to respond in time.

There are two other things that are optional on the SEL and not available on the SE. They are smart cruise control and an enhanced forward collision system that has cyclist detection and junction-turning detection.

Compare the SEL vs N Line. What is the difference?

Hyundai gives the N Line a six-speed manual transmission as a standard component. If a buyer doesn't want to drive a manual, there's the option to get a seven-speed dual clutch transmission with SHIFTRONIC. The N Line also has a multi-link rear suspension to enhance handling, and it rides on 18-inch tires.

On the exterior of the N Line, there are some notable upgrades. In fact, this car has a sleek and sophisticated style, like other N Line models in the company's lineup. It comes with unique features, such as an N Line front grille, front bumper, and rear fascia with diffuser. At the rear of the car, there's a chrome twin exhaust outlet, which makes the car seem more athletic. There is gloss black trim around the windows, and there are full LED taillights.

The N Line has some more refined components to it than the lower trims do. For example, its side mirrors have heating elements to combat frost and ice buildup. The driver gets to take advantage of a power-adjustable seat, and there's a standard power tilt-and-slide sunroof. The seats are covered in a combination of leather and cloth, and they're special sport seats that are designed to be supportive.

Going along with this theme are a black headliner and alloy sport pedals. The gauge cluster is reminiscent of one that might be included in a cockpit or a sports car. The steering wheel is wrapped in leather, as is the shift knob. That steering wheel can come with paddle shifters if the N Line has been equipped with the dual-clutch transmission.

The infotainment package on the N Line is almost exactly the same as what the SEL offers. However, the N Line has wireless charging.

Hyundai Digital Key is a futuristic feature that is concluded with the N Line. With this feature, a smartphone can function as the smart key fob. Of course, it would have to be preprogrammed to do so, but the driver can do this quite easily. It can be useful in a few different scenarios. One would be when a friend is temporarily borrowing the car and can't meet up with the owner to get the keys, and another is when someone is going hiking, biking, or doing something else active and doesn't want to keep his/her keys while adventuring. People in other situations will likely find Hyundai Digital Key to be great to have.

Those who might carry larger cargo in the back will be happy that the N Line has a 60/40 split-folding rear bench. It can allow for greater flexibility when carrying bulky items. This type of bench comes with an armrest and cupholders. With the SEL, the bench is just one piece, so there's not as much versatility.

Compare the N Line vs Limited Trim Levels. What is the difference?

Under the hood of the Limited, there's the same 2.0-liter engine that the SE and SEL have. This means that the N Line is the only Elantra to have the turbocharged engine. Though the Limited is not as zippy as the N Line is, it definitely has some other enhancements that make it worth a look.

The Limited rides on 17-inch wheels, and it has chrome window trim and a dark chrome front grille. There's a full set of LEDs in the headlights, taillights, and Daytime Running Lights. On its side mirrors, the turn signal indicators are very visible.

Inside the cabin of the Limited, leather seats add to the refinement of the trim. The steering wheel and gear shifter are wrapped in leather, and drivers can customize the color of the ambient lighting. The Limited is the only trim to have a front passenger seatback pocket. This might seem so minor, but it can be convenient for storing maps, books, and other types of items.

Hyundai has given the Limited the best features in terms of technology. It comes standard with a 10.25-inch touchscreen instead of an eight-inch one, and its touchscreen has integrated navigation. Dynamic voice recognition makes it easier to use the infotainment system while keeping one's hands on the wheel. The premium sound system comes with eight Bose speakers, including a subwoofer. Another 10.25-inch screen has been placed behind the steering wheel of the Limited, and it's a digital gauge cluster.

The Limited has the most advanced safety mechanisms as well. It comes standard with smart cruise control and cyclist detection. It has a parking distance warning system and reverse automatic braking to prevent minor fender benders. Plus, it has highway drive assist. When this program is engaged, the Elantra can use an array of information to drive in a safe manner. It uses GPS data and its sensors to keep itself centered in its lane and going the right speed, and it can truly be appreciated on long stretches of road.

It's hard to go wrong with the Hyundai Elantra because of its excellent value. For being so affordable, it has an impressive amount of technology. When deciding which trim to get, customers will have to think about how much power they prefer. Going on a test drive will reveal that the N Line is more fun to drive than the others are because of its turbocharged engine. The N Line also has the enhanced styling, sunroof, wireless charging, and Hyundai Digital Key. For these reasons, the N Line is recommended.

If power isn't a priority, though, then the Limited would be a solid choice. It's relatively affordable, and it comes with so many advantages. They include navigation, a larger touchscreen, a premium sound system, leather seats, and smart cruise control. These are all components that are commonly found in premium vehicles, so they give the Limited the ability to attract attention from those with high-end tastes. The downside of the Limited is that it only has the 147-horsepower engine.

In the end, people will have to decide which is more important, power and excitement or luxury and convenience. Either way, the Hyundai Elantra will prove to be reliable and practical.