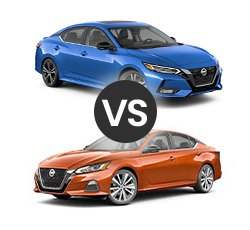 2022 Sentra vs Altima - How Do They Stack Up? What are the differences?

Folks who desire enhanced performance and an extra number of premium features will likely favor the Altima. On the other hand, car shoppers on a tighter budget may lean more towards the Sentra. In this head-to-head comparison, we’ll take a closer examination of how these popular Nissan models stack up against each other.

Of these two sedans, the 2022 Nissan Altima is clearly the larger model. It’s nearly 193 inches long. By comparison, the 2022 Nissan Sentra is roughly 182.7 inches long. Commuters who live in a big city may appreciate the Sentra’s more compact design, which helps make it less hectic to park in tight spots.

The Altima and the Sentra share some similar exterior styling cues. A “floating roof” design adds an extra degree of sleekness. On the front, Nissan’s trademark V-Motion grille adds a special touch. Upgraded LED headlights are available on the higher trim levels.

Both cars offer a racier SR trim level. Upsized sport wheels and a rear spoiler help create a more aggressive look. A blacked-out Midnight Edition appearance package is also on the list of options. Dual exhaust finishers are available on the Altima. On the other hand, only the Sentra offers an optional black roof.

Most drivers will find the Sentra’s overall interior space to be perfectly adequate. The available front legroom is almost identical. However, there’s an extra 0.5 inches of rear legroom in the Altima. A wider design also ensures more hip space when traveling with three passengers in the back. Nevertheless, neither car has an exceptionally spacious backseat. Most midsize competitors are more spacious than the Altima, thus making it less suitable for bigger families.

A bigger trunk does enable the Altima to carry just a bit more gear. It provides about 15.4 cubic feet of cargo space. By comparison, there’s around 14.3 cubic feet of storage space in the Sentra’s trunk.

These sedans are closely matched in terms of outward visibility. Even when taking curves, visibility out of the front shield remains good. Like the Altima, the Sentra features thick rear roof pillars that can block the driver’s view at times.

Nissan decided to only offer the new Sentra with a single powertrain. The Sentra uses a small, 2.0-liter four-cylinder engine with 149 horsepower. To maximize fuel economy, Nissan links this engine to a continuously variable automatic transmission. While this gearless transmission operates smoothly, it’s not as engaging as a traditional automatic transmission.

Most test drivers describe the Sentra’s overall performance as being adequate. This compact sedan clocks a 0-60 mph time of around 8.3 seconds, which is average for the segment. While the Sentra isn’t a thrill machine, most people will find it to be a satisfying car for daily commuting.

The Altima uses a 2.5-liter, four-cylinder engine. Output is a decent 188 horsepower. Like its smaller sibling, this sedan features a continuously variable automatic transmission. Expect acceleration to be similar to that of the Sentra.

For Altima fans who crave a more exuberant driving experience, Nissan offers its exclusive VC-Turbo four-cylinder engine. Production rises to a more formidable 248 horsepower. Road tests show the turbo-powered Altima is capable of recording a 0-60 mph time of 5.8 seconds. While this cutting-edge engine rivals the performance of a traditional V6 engine, variable-compression technology enables it to offer better fuel economy.

Among the Altima’s biggest advantages over the Sentra is its optional AWD system. It’s virtually a bare necessity for owners who live in the country’s Snowbelt region. When road conditions become dicey, the AWD system will instantaneously seek to boost traction. Unfortunately, only the Altima’s less powerful base engine gives buyers access to all-wheel drive.

Even the Altima’s more potent VC-Turbo engine can return up to 25 mpg town/34 mpg freeway. While drivers won’t need to fill the tank with premium gasoline, the use of regular unleaded will reduce the engine’s peak power.

Of these two models, the 2022 Nissan Sentra offers the best ride. In fact, many people consider the Sentra’s ride to be among the segment’s most comfy. It feels smooth and composed on most road surfaces.

While the Altima’s ride is not terrible, it is a bit rougher. Passengers can anticipate feeling a greater number of impacts when traveling over harsh pavement. Some of the Altima’s rivals do a better job of absorbing bumps.

In regard to handling capabilities, the Altima is a step above the Sentra. It inspires a great deal of confidence when encountering sweeping curves. Although the Altima’s steering feel is a bit vague, drivers will truly appreciate this sedan’s excellent stability.

Nissan equips the Altima’s SR trim with a sport suspension, which promotes an even more athletic performance. A special feature called Intelligent Trace Control is also found on the Altima SR. It further enhances the car’s agility on winding roads by applying light braking pressure to individual wheels. While the Altima SR is not a hardcore performance sedan, owners can have a bit more driving fun.

Most commuters won’t have any big complaints about the Sentra’s driving dynamics. Nevertheless, it’s less agile than the Altima. Because of the Sentra’s softer suspension tuning, handling is not quite as responsive.

The more luxurious Altima is a tad quieter than the Sentra. It offers Active Noise Cancellation technology, which further quietens the cabin. More road noise is heard when traveling in the Sentra. However, this is unlikely to be a concern for most drivers.

Drivers who want the best braking performance will be happier with the Altima. It posted an average 60-0 mph stopping distance of 120 feet. When braking from 60 mph, the Sentra takes around 131 feet to come to a complete halt. Most of the Sentra’s key rivals manage to stop quicker.

Whether a person chooses the 2022 Nissan Altima or the 2022 Nissan Sentra, they will receive Nissan’s highly recommended Zero Gravity seats. These advanced seats are engineered to keep the occupant's body in a neutral position, thus helping reduce joint pressure. On long road trips, most people report experiencing greater comfort.

Although the Altima does have some advantages over the Sentra, it’s not substantially more luxurious. In contrast to some of today’s other compact sedans, the Sentra can be equipped with quilted leather seats. Both cars come equipped with a flat-bottom steering wheel, which gives the cockpit a sportier feel.

These models feature the same NissanConnect infotainment system. While the standard 7.0-inch touchscreen is easy to operate, buyers can upgrade to a bigger 8.0-inch touchscreen. Apple CarPlay and Android Auto smartphone integration technologies come with both units. Unfortunately for road trippers, Nissan does not offer the Sentra with a built-in navigation system. The Altima’s available Door to Door Navigation system can provide up-to-date traffic info.

Music fans may want to upgrade these sedans with a Bose premium audio system. They can look forward to experiencing a more fulfilling soundtrack. A Wi-Fi hotspot is available for folks who desire a mobile internet connection.

Both cars received five out of five stars in overall crash protection from the federal government. While the Sentra’s IIHS Top Safety Pick award is impressive, the Altima was chosen as an IIHS Top Safety Pick+. It’s important to note that only the Altima comes standard with rear disc brakes for enhanced stopping power. Cheaper drum brakes are found on the base Sentra.

The 2022 Nissan Sentra and the 2022 Nissan Altima offer some highly beneficial safety technologies. Standard driving aids on the Sentra include a blind-spot monitor, front/rear automatic braking, and lane departure awareness. Every Sentra trim also receives Rear Door Alert, which helps remind drivers of children and pets sitting in the rear.

Nissan does not list blind-spot monitoring and rear automatic braking on the Altima’s list of standard equipment. These active safety features come with the base model’s optional Driver Assist package.

As expected, a backup camera is found on both cars. However, buyers have access to Nissan’s 360-degree Around View Monitor camera system. Built-in Moving Object Detection enhances the driver’s sense of awareness when maneuvering in crowded areas.

While the Sentra can be equipped with smart cruise control, the Altima goes a step further by offering Nissan’s more advanced ProPILOT Assist system. Not only can ProPILOT Assist keep the car centered in its traveling lane, but it also controls acceleration and braking under certain conditions. Motorists can expect to experiencing less driving fatigue.

Car shoppers who are not looking to break the bank will love the Sentra’s affordability. Prices for the 2022 Nissan Sentra start at a more than reasonable $19,950. Meanwhile, Nissan lists the new Altima with a starting MSRP of $24,900.

In terms of performance, the Sentra can keep pace with the larger Altima. Fuel economy is also quite similar. However, drivers who crave stronger acceleration will want the Altima’s much stronger VC-Turbo engine. Another highlight is the Altima SR’s more athletic handling. A sports suspension and Intelligent Trace Control help promote an agile performance on curvy roads.

Folks who routinely face snowy conditions during the winter may want the Altima’s optional AWD system. It greatly enhances traction when the weather turns bad. The Sentra front-wheel-drive system isn’t as effective on slippery roads.

Despite being classified as a midsize model, the 2022 Nissan Altima doesn’t really offer more comfort. While there’s slightly more legroom in the Altima’s backseat, the average family won’t notice a difference. Many of the same amenities are also available, including front-seating heating modes.

Standard safety technologies add to the Sentra’s value. However, only the Altima offers ProPILOT Assist. It’s one of the best adaptive cruise control systems in the class.