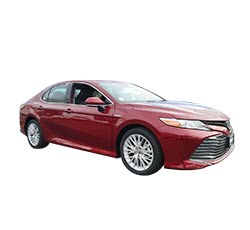 What 2020 Toyota Camry Hybrid Trim Level Should you Buy? What is the Difference Between Trims?

The Toyota Camry has long been a leader in the market. It's a practical car that has a reasonable price tag, and many of the trims come packed with convenience and technological features. While the regular Camry is fairly efficient, the Camry Hybrid shines in this regard. It can get over 50 miles per gallon, which makes it very attractive to anyone who wants to save money at the gas station.

The reason why the 2020 Toyota Camry Hybrid does so well in fuel economy is because of its efficient engine and powerful electric motor. The hybrid engine is a 2.5-liter four-cylinder model, and the electric motor is powered by a battery that's been refined and carefully designed to be reliable, effective, and long-lasting. The two components work together to generate a total of 208 horsepower, which is a respectable statistic whether a sedan is a hybrid model or not.

Front-wheel drive is standard, and the car uses an electronically controlled continuously variable transmission. Shifting is smooth, and the Camry feels responsive at all speeds. Drivers can choose from either ECO, EV, Normal, or Sport modes. ECO is the most efficient of the bunch, and because EV allows for electric-only driving, it's very limited in range. As one might imagine, Sport mode brings with it an extra pep so that people can accelerate a bit quicker.

With a muscular shape and a mix of curves and angles, the Camry looks streamlined. Inside the cabin, there is room for five passengers, with a generous 38 inches of leg room in the second row. The cargo hold has 15.1 cubic feet of storage capacity. One or both sides of the 60/40 split-bench can be folded down to maximize cargo carrying ability.

There are three trims to choose from: the LE, SE, and XLE. Even though its the base model, the Camry LE feels upscale in many ways. The SE has some more sporty elements to it, both in terms of performance and in stylistic details. The XLE has the most high-end features and would appeal to those consumers interested in a luxury vehicle.

This guide will go over the differences in each trim.

Compare the 2020 Toyota Camry Hybrid LE vs SE Trim Levels.  What is the difference?

Despite running on the same engine and motor, the LE and SE have slightly different fuel economy estimates. The LE, the lighter of the two, gets up to 51/31 (city/highway) miles per gallon. Those numbers drop to 44/47 miles per gallon the SE; this level of efficiency is still quite enviable.

Both trims have a dual-zone climate control system that can filter out air and detect humidity levels. They also have a 4.2-inch multi-information display on which the driver can keep track of data related to things like temperature, trip information, distance to empty, and energy usage. The SE's display can show information related to the tire pressure monitoring system as well.

A similar difference between the materials in the two trims is that only the SE has a leather-trimmed steering wheel, and because the car is a sport edition, it comes with paddle shifters that put drivers in greater control of gear transitions. The SE, additionally, has an embossed mesh trim instead of the more classic wood trim in the LE. There are many compartments tucked away around the seating area, including in the center console, seatback pockets, and overhead section between the driver and passenger.

Both models give drivers a view of what's behind them with their integrated backup cameras. The projected path function can help with precision when parking or backing up in a garage, for instance, or another tight space.

The standard safety package on the Toyota is a great benefit. It comes with a pre-collision warning system that can brake if the driver doesn't have a chance to react, a lane departure mechanism that warns the driver if he or she is drifting and takes corrective action if appropriate, and an adaptive cruise control feature that can maintain proper distancing at all speeds. Blind spot monitoring is available on the LE and SE, and standard elements like traction control and anti-lock brakes improve stability. These elements, that often aren't even noticed by drivers, can play an important role in keeping the Camry in the right place.

Making it convenient to lock and unlock the car is the Smart Key System on the LE and SE. This system uses technology that can detect the presence of the key fob, which could be in someone's hand or hidden away in a pocket or bag. When the key fob is detected to be near the car, anyone can simply touch the door handle to unlock it. Because there is a push button start, the key fob can remain safely secured.

When arriving at a destination, the same idea applies; the driver can just close the door and touch the handle to lock things up, and it can prevent a lot of fumbling with keys that people may otherwise have to do to access their cars.

The technology package in the Camry Hybrid is pretty comprehensive and comes with a seven-inch touchscreen. It includes Android Auto and Apple CarPlay, components that so many consumers are looking for, in addition to Amazon Alexa and Bluetooth compatibility. Factor in the ability of the car to act as a 4G Wi-Fi hotspot and you have a modern vehicle that lets people stay connected at all times.

Multiple USB ports come as part of the infotainment system, which is called "Audio." One USB media port and two USB charge ports are included, as is the ability to play SiriusXM Satellite Radio and Bluetooth streaming audio. Because the Camry Hybrid can accept certain voice commands, drivers can keep their hands on the wheel and their attention focused where it counts.

Through the Connected Services package, drivers can check on their Toyotas through their mobile devices. They can receive maintenance alerts and see data through the Service Connect feature. The Remote Connect feature lets people lock and unlock the doors in case they've forgotten to, and Safety Connect provides peace of mind with 24/7 roadside assistance and automatic collision notification if the car experiences a rear-end collision or has had its air bags deployed.

There are some exterior details that could play a role in whether a potential customer ends up buying a LE or SE version of the Camry Hybrid. The LE has a single exhaust, dark gray grille, and 16-inch wheels. The SE, on the other hand, has a single exhaust with dual chrome tips, a black grille with a sport mesh insert, and 18-inch wheels. It also has a rear spoiler and side rocker panels to enhance its style.

Compare the 2020 Toyota Camry Hybrid SE vs XLE Trims.  What is the difference?

The XLE has a bright metallic front grille, and its side mirrors are much more advanced than those on the SE. They come with a heated element so they can defrost themselves, an integrated turn signal that other drivers can easily see, and blind spot warning indicators that can help on busy roads. The XLE, like the SE, rides on 18-inch wheels, but it uses silver ones instead of black machine-finish alloy wheels. Taking the sporty feel down a notch in the XLE are the lack of rear spoiler and dual chrome tips on the exhaust pipe.

The upgrades continue inside the cabin of the XLE. Its dual-zone climate system comes with rear-seat vents that people in the back will truly appreciate in extreme temperatures. Seats are leather-trimmed, and they are heated and ventilated in the front. Both the driver and passenger can power-adjust their seats in eight ways. Catching attention is the enhanced Tiger Eye wood trim found around the interior, and ambient lighting can add to the peaceful ambience.

In addition to using the USB ports for charging, people in an XLE can use Qi-compatible wireless charging. This is available on the SE but not standard. Another technological enhancement is that the XLE's backup camera has dynamic gridlines instead of just a projected path. Plus, the multi-information display that measures 4.2 inches on the SE is increased to seven inches on the XLE. It can display maintenance and warning messages and can be customized to a driver's preferences.

The leather-trimmed steering wheel on the XLE doesn't have the paddle shifters that the SE has. It does, however, have the same controls as the SE and LE. Those steering wheel-mounted controls give drivers the ability to quickly make calls, give voice commands, control music playback, and adjust cruise control settings.

The XLE is the only trim out of the three that comes with an available bird's eye view camera that gives a 360-degree perspective and an available 10-inch head-up display that can project speed and other data directly onto the windshield in front of the driver. It's also the only one that has a standard auto-dimming rearview mirror and HomeLink transceiver, which allows connectivity with a garage door or security system.

Measuring eight inches, the touchscreen on the XLE is a little larger than the one on the SE. A benefit of the XLE's upgraded Audio Plus system is that it comes with a CD player in addition to all the other components on the LE and SE.

All of the trims are compatible with the Toyota+Alexa App, which lets people quickly give commands and access information. Only the XLE comes with the ability to communicate with the car via an Alexa device. With this set up, people can ask their Alexa device to lock or unlock the doors, get vehicle data, and more.

Since Toyota has incorporated many advanced features in the Camry Hybrid, the LE is a solid choice. It has a user-friendly infotainment system that supports smartphone integration, comfortable seating, and an impressive safety package. The SE has a somewhat more aggressive aesthetic, and there are a few interior upgrades that could make a difference for some consumers. Finally, the XLE has premium touches like leather seats, heated and ventilated front seats, and a larger touchscreen. It can also be optimized to have high-tech features like the head-up display.

It really seems that there is no bad choice with the Toyota Camry Hybrid. It has great efficiency and ample power, and one might not even notice the hybrid aspect until realizing that it's been awhile since the last fill-up.

When taking budget into consideration, the LE offers the most value, but the others could be considered if consumers don't mind paying extra for the little details that matter to them.

Save Money on a 2020 Toyota Camry Hybrid:
Are you Shopping for a New Vehicle? Find the Best Deals with "Free - No Hassle" Prices Quotes.